Environmental and social consciousness, one sip at a time 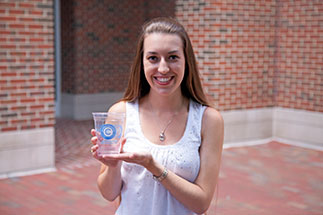 Coincidentally, another group of UNC students was contemplating how to use the cups as a platform for addressing sexual assault. They didn’t take long to realize they were onto something: a combined effort to create conscious change.

Traditional plastic cups – a staple at events from tailgates to sporting and career events and parties – are made from an oil-based plastic that takes hundreds of years to decompose. Thousands of discarded cups pile up in landfills ever year.

“To put this in perspective, the first plastic cups were invented in the 1930s and are still sitting in the landfill today,” says MacCormac.

After researching alternatives, she found a solution: a corn-based bio-plastic that – under the right conditions – will decompose within 50 days. Commercial composting facilities create those conditions, which include a 150-degree environment with 90 percent humidity and constant oxygen exposure to speed up the decomposition process.

The cups look and feel like the plastic cups we’re accustomed to using. The only tangible difference is how they’re discarded. Rather than being tossed into trashcans, these eco-friendly cups end up in bins designated for compost collection services.

Cities and universities provide designated compost collection services, making disposal of eco-friendly cups as convenient as taking out the trash or putting out your recycling for pickup.

“You can find green composting bins outside most dorms on campus,” says MacCormac.

The result is reduced carbon footprint that saves space in overflowing landfills and converts energy into a reusable resource.

Collaboration is one of the cornerstones of the UNC community – and the Carolina Conscious story is a perfect example.

They also were exploring ideas on how to use cups to raise awareness about another issue: sexual assault. They joined forces and co-founded Carolina Conscious, an organization dedicated to creating a more environmentally and socially conscious campus community.

“It’s really exciting to know that you’re not contributing to pollution or excess waste,” says MacCormac. When you use Carolina Conscious cups, you’re contributing to the enrichment of fertile soil which can ultimately be used to put food on someone’s table.”

Every Carolina Conscious cup is branded with the organization’s logo and a call-to-action: “Get the conversation started about sexual assault.” The cups also include the mission that ties two important causes together: “Respectful of each other. Grateful for the Earth.”

The founders intentionally chose a subtle, middle-of-the-road strategy to raise awareness while making the topic approachable for all students.

“Sexual assault isn’t usually something talked about at parties, so the cups are a great way to get the conversation started, as our motto states,” says MacCormac. “We wanted the cups to help students meet each other halfway in the conversation, so everyone could jump on board with our overall message – being more conscious of your actions.”

“The cups are crafted in such a way as to subtly but insistently keep that awareness in the spotlight,” says Carolina Conscious advisor Tim Flood, a management and corporate communication professor.

Carolina Conscious launched as a pilot project in April 2015. They have sold more than 45,000 cups to fraternities, dorms and other social groups on campus – including the UNC Kenan-Flagler full-time MBA Program – and have received widespread support and feedback from customers on the positive and inclusive messages printed on each cup.

The organization partnered with UNC Campus Rec and hopes to extend its reach to more groups across campus. “We’d like to partner with organizations like Carolina Dining Services and Carolina Athletics to have our cups used at football and basketball games, as well as in campus dining halls,” says MacCormac.

MacCormac is confident about the group’s sustainability after focusing on succession planning and nurturing relationships with partner groups. The founders stay on in advisory capacity, but a new team of students – including Mary Scott Lowery (BSBA ’18), who is following in the steps of her brother/founder – are primed to take on the group’s work.

Their long –term goal was to expand to other universities but that happened faster than they dreamed possible. University of California, Berkeley students heard about the cups and asked to order them for their campus. When MacCormac pointed out the cups were Carolina-branded, she also proposed a partnership between the two universities, which involves rebranding the cups. The Carolina team is developing protocols and a starter kit to share with Berkeley and other schools to provide the tools and information they need to get started

After leapfrogging from the East Coast to the West, MacCormac believes “there must be one group of people on every campus who are driven by same goals as we are.”

Flood agrees: “Carolina Conscious could be on the verge of a national movement,” he says. Until then, they leave a legacy at UNC about how to both build awareness and make change happen.