People go to business school for many reasons. The motivation for Joe Sweeney (MBA ’18) was fulfilling his dream of heading up his own fish farm –  kind of unexpected for a guy from central Iowa.

Iowa – known for its cornfields and livestock – might seem an unlikely location to harvest fish, but it’s the lack fish there that makes it is the perfect place for his enterprise. And demand isn’t just local: The U.S. imports more than 90 percent of the seafood we consume, according to CNBC.

Fish farming is a perfect fit for Sweeney in many ways. He grew up with entrepreneurial parents. Together, they ran the traditional family farm, an in-home publishing company and a nonprofit organization.

“Helping my parents with their businesses, I realized that hardworking people can make a life for themselves outside the traditional job structure,” says Sweeney.

While he was an undergraduate at Iowa State University, he participated in the Future Farmers of America. To raise money for the group, he sold lemonade for $2 a glass during RAGBRAI, a bike ride of over 20,000 people. He earned $2,000 and it “gave me a taste of entrepreneurship.”

While looking for ways to fulfill his dream of being his own boss, he became intrigued by the prospect of fish farming. Headlines about dwindling and dangerous seafood supplies fueled his desire to make a go of it.

As he trained himself for the field, Sweeney signed up to work for free for fish farms. He took on the dirtiest, greasiest jobs at fish farms in Alabama, Mississippi and Arkansas. The point was to understand every aspect of the business.

When he returned to Iowa, he and four other family farmers worked to start a fish farm. In June 2013, the families united to found Buckeye Fish Company, which became the largest fish farm in Iowa.

When one of the farms was acquired by an investment firm, Sweeney and others didn’t feel comfortable with the firm’s pitch, but depended on its support, so they sold their farms to the firm, too. When Buckeye Fish Company was about three years old, the firm sold it and Sweeney had to decide on his next move.

That’s when he turned to longtime family friend Paul Skartvedt with whom he had been involved in 4-H. They decided to try again to build a new business in Ellsworth, Iowa. They drew on the lessons learned the first time around to found Eagle’s Catch, LLLP to produce “high quality tilapia raised in central Iowa for consumers everywhere,” according to their website. 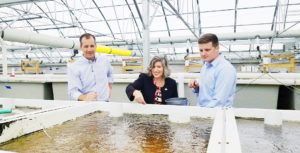 Sweeney, CEO of the firm, and his partners drew on three lessons. First, the company had to produce more fish to limit exposure risk with buyers. “Previously we did not have enough fish to get the buyers’ attention,” he says.

Third, Sweeney and Skartvedt wanted to reduce the amount of water used. “We want to be the most water- and carbon-neutral form of protein production,” says Sweeney.

With these ambitious goals, Sweeney sought to enhance his business knowledge and skills. “There was a lot of catch up,” he says, “to run a business of this size.”

So even as they launched the new business in 2017, Sweeney signed up for UNC Kenan-Flagler’s online MBA program.

A high-caliber online program was ideal for him. There wasn’t a top program near his town –home to just 103 people – and leaving the farm as it was being birthed was not an option.

Sweeney had some reservations before enrolling. Mainly, he worried about developing a network with virtual classmates. But he experienced strong peer interaction during the online classes as well as in the face-to-face classes held in major business centers in the U.S. and around the world.

“Summits allow us to connect, tell stories and share experiences,” he says. “We learn from each other.” The connections with classmates are part of an enduring network, evidenced when Sweeney back to Chapel Hill in 2019 for the first online MBA alumni immersion experience.

Immediately applying what he learned in class helped Sweeney get his fish farm off the ground. “I really enjoyed the coursework,” he says. “It helped me think critically about, ‘How does this apply to my business?’”

In particular, he applied the lessons of optimizing operations and recognizing how small changes can make a big difference in profitability. And because he felt his finance skills weren’t strong, he took more of classes in that area.

His education paid off: Eagle’s Catch closed on financing in 2018 and raised $16 million in equity/debt vehicles, and is nearing completion of one of the world’s largest indoor fish farms.

One of Sweeney’s objectives is to help build out support industries for farm fishing to thrive in Iowa. It’s a great location because of the vast quantity and quality of water.

“We want to offset the amount of imported seafood sold in the United States,” he says. “We want to do better for the oceans and provide safer food for families.”