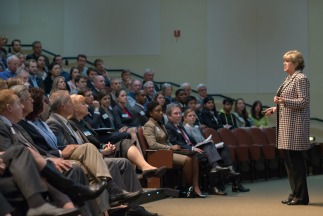 Prior success can make people ignore warning signs in times of trouble.

That was the case at Enron Corporation, where Watkins served as a vice president. Fortune named it the “Most Innovative Company in America” six years in a row from 1996 to 2001.

“The problem with innovation is the dark side of pushing your employees that much,” says Watkins, who spoke at UNC Kenan-Flagler as part of the Dean’s Speaker Series. “We got pushed to the point of crossing lines.”

In a company that listed core values of respect, integrity, communication and excellence, success blinded executives and led them into committing fraud. Watkins discovered the fraud and reported it to executives.

Watkins was surprised to find people ignoring the truth. She kept asking questions and never got any legitimate answers.

She says she was like a crew member on the Titanic, alerting management that they had hit an iceberg and that they were going to sink.

“It never dawned on me that Lay would not go down to the bottom of the ship,” says Watkins. “I didn’t know all this. They did pretend they were doing a thorough investigation with me.”

Whistleblowing comes with hardship, says Watkins, who received the whistleblower treatment at Enron. She was moved from the executive floor and was not given any real work to do.

Once The Wall Street Journal wrote articles speculating about fraud at Enron, the board of directors started formally investigating accounting concerns, Watkins says. The U.S. Securities and Exchange Commission also launched its own investigation. Watkins was vindicated when a congressional staffer found her memos to executives about the fraud she had uncovered.

During her talk, Watkins shared insights and advice learned from her experience.

Leaders need to have pristine ethics and keep an ear to the ground.
Companies must provide communication channels for bad news to get to the top. “Good leaders develop those informal lines of communication,” she says.

If you discover something amiss, seek out your peers and find out how they feel about the situation.
Watkins says her only regret is going at it alone. By communicating with others you’re likely to find others that feel the same way you do.

Speak your truth to those in power.
“Put it in writing, but don’t get married to fixing it,” says Watkins. “You can’t change the value system unless you’re the leader. It’s up to them to do the right thing.”

Pay attention to what the CEO says.
A CEO should talk about the company’s culture and employees – not just about shareholder value or making the company attractive to investors. A CEO should also love the products and services their organization provides, says Watkins.

Consider the three M’s: Mentor, media, mother.
“If you would be embarrassed to discuss a transaction with a mentor you respect and admire, it’s problematic,” says Watkins. “If you wouldn’t want it on the front page of the media, it’s problematic. The catch all: if you don’t want your mother to find out about it, you should do something.”

A Martin Luther King Jr. quote used to be found at the Enron offices: “Our lives begin to end the day we remain silent about things that really matter.”
Watkins doesn’t regret blowing the whistle, but there are other whistleblowers that do. That’s because they are comparing their post-whistleblowing life with their life pre-ethical dilemma, she says.

“What they really need to compare it to is what their life would be like if they had rationalized staying silent and how would they really feel about living with that rationalization,” says Watkins. “Really deep down in your core, you wouldn’t be happy with yourself. You spoke up. You were courageous.”

Watkins finds it important to speak with college students because it’s the small steps in the wrong direction that can result in a situation similar to Enron. You have to pay attention to disaster, plan for it and be disciplined to follow that plan, Watkins says.

“The best organizations just value their culture, their value system,” says Watkins. “They pay attention to those small things and they jump on it quickly.”