Empire state of mind: Entrepreneurship in the Big Apple 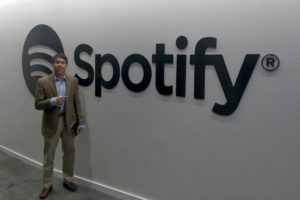 New York: the land of opportunity, where people from all walks of life converge in an attempt to chase the American dream.

With the increased buzz surrounding startups, entrepreneurship has become the new American dream. Spending a summer interning at Blippar, an augmented reality startup based in New York City (NYC), gave me an inside look at the innovation happening around every corner. The city presents this sense of bustling energy and excitement that is intangible yet universal and inspires you to want to achieve more. The same was true when I visited NYC for the Fall 2016 Adams Apprenticeship career trek, and I was glad to have shared the experience with my fellow Adams Apprentices.

My first morning back in New York, I helped my fellow Adams Apprentices navigate to 29th and 6th, where we started our journey at Venture for America (VFA).

VFA is a two-year fellowship program that matches recent college graduates with startups in cities with developing entrepreneurial ecosystems – think Philadelphia, Detroit and San Antonio. But the impact of the fellowship extends well beyond the two years spent in the program. VFA prepares fellows to become entrepreneurs for life – whether founding their own company after completing the program or working to jump start the entrepreneurial ecosystem in their respective communities. VFA truly allows smart people to build things and embodies the spirit of paying it forward, which is an essential element in any scalable, sustainable organization.

We also visited Spotify, a leading music streaming service that provides users with access to over 300 million songs. Spotify has made consumers their number one priority – a strategy that’s allowed them to take market share from competitors like Pandora and Apple Music. Through a focus on personalization, Spotify has given people the ability to DJ and interact with their music in ways like never before. The company is constantly focused on innovation, hosting quarterly “hack weeks,” when employees step away from their current projects to brainstorm new, outside the box ideas to improve the Spotify service. One extremely popular feature that was born during one of these “hack weeks” is Discover Weekly, which automatically curates playlists catered to the user’s taste. I hope to emulate the company’s ethos that fosters creativity to generate serendipity in every company I start.

Our last stop of the trip was IBM Watson, the division boasting a supercomputer that couples artificial intelligence and analytical software to perform cognitive computing. Applications of IBM Watson can be used far and wide. IBM’s technology is currently being implemented into toys to produce a better, more interactive playtime experience for kids. Using machine learning technology, the toys can adapt to include advanced features and functions as children learn and grow.

IBM’s technology has also been used in another fascinating application that combines Watson’s capabilities with the talent of a producer and uses data to create music that “listens” to the audience. The idea came to fruition when Grammy award-winning producer Alex da Kid collaborated with IBM Watson to create a song that would tap into people’s emotions. This burst in ingenuity is exactly why I believe that the most powerful breakthroughs in our world over the next decade and beyond will be driven by advances in artificial intelligence.

In his 1931 book “The Epic of America,” author James Truslow Adams wrote that the American dream was “The dream of a land in which life should be better and richer and fuller for everyone, with opportunity for each according to ability or achievement” – regardless of their social class or the circumstances of their birth.

After World War II, NYC became a utopia where people believed they could make all of their dreams and desires come true. Today, it’s the closest thing we have to a meritocracy. I firmly believe that with hard work and passion, anyone can pursue his or her goals to the fullest. As technology continues to exponentially impact how we live, work and play, those who can leverage it will be best positioned to advance in society. The fact that New York is at the very center of this movement makes the city even more unique, with inspiring energy and excitement I have not encountered anywhere else. Until next time!