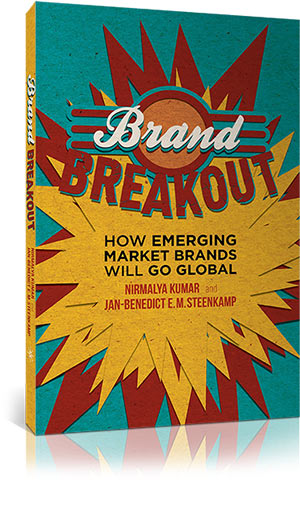 How does a company in China, Brazil or India build a global brand? What is the best route?

Strategies for “brand breakout” and critical lessons from the brands that already have made these moves are shared by Steenkamp, the C. Knox Massey Distinguished Professor of Marketing at UNC Kenan-Flagler, and co-author Nirmalya Kumar of London Business School. Their book is based on their extensive interviews with executives from aspiring global brands in China, Brazil, India and other emerging markets; original academic research; and consulting with companies on all continents.

The book has earned critical acclaim around the world, including a review in The Economist. It was published in June by Palgrave MacMillan, CEIBS Publishing Group in Shanghai produced a Chinese-language edition in August.

In addition to identifying “brand breakout” strategies for emerging-market firms, Western brand managers will better understand the changing nature of global competition in which n emerging markets now account for 50 percent of global output and 80 percent of global growth, a shift in the economic center of gravity the world has not seen before, says Steenkamp.

Western firms that underestimate these fast-approaching emerging market global brands will make fatal mistakes, he says. “A golden rule in strategic management is to understand your competitors, says Steenkamp. “This is a crucial prerequisite for being able to developing effective counter strategies. In the past, companies ranging from RCA and American Motors to Philips Electronics, Thomson and Peugeot were caught napping while Japanese and Korean brands entered the global marketplace. Where are these companies now? They are either bankrupt or relegated to minor positions in markets they once dominated.”

There is less room for complacency and surprise than ever before, Steenkamp advises. Western managers should plot both counter- and cooperative strategies to forge successful alliances, use mergers and acquisitions, and never underestimate emerging-market companies that are attempting to take their brands global as they break out into international markets.

Here are eight routes to “brand breakout” and the firms that have traveled them.

1. Asian tortoise: Migrate to higher quality and brand premium.
A brand can enter a developed market on the low end and slowly build brand recognition and economies of scale over time to improve quality and raise prices. When it is ready to go after the premium market, it can introduce a separate premium brand that’s distinct from the original. Examples include Haier, Pearl River Piano and Wanli in China.

2. Business to consumer: Leverage B2B strength in B2C markets.
By building a B2B brand ﬁrst, managers can start a platform for expansion, develop name recognition and attract ﬁrst-rate talent. When the company is ready to start marketing to consumers — often in an adjacent product category — it has a bigger foundation on which to build. Examples include ASD, Galanz, Huawei and ZTE (China) and Mahindra (India).

3. Diaspora: Follow emigrants into the world.
With unprecedented numbers of people not living in their native countries, a company can enter developed markets by going after its ethnic groups ﬁrst. Over time, the brand might attract Western customers, too. Examples include Corona (Mexico), Dabur (India), Jollibee (Philippines), Maybank Islamic (Malaysia), Mandarin Oriental (China) and Pran (Bangladesh).

4. Brand acquisition: Buy global brands from Western multinationals.
An emerging market company can acquire a Western company, a move that allows it to buy in to the developed market and gain both an instant international reputation and access to distribution channels in the process. Examples include Bimbo (Mexico), Geely, Lenovo and TCL. (China), and Tata Motors (India).

5. Positive campaign: Overcome negative associations of the country of origin.
Rather than ﬂaunting its nationality, a company can hide its country of origin or attack the stereotype that developed market consumers have of their country. Examples include Chang Beer (Thailand), and Ospop, Roewe, Shanghai Vive and Sheji/Sorgere (China). Nation-branding campaigns (South Korea) also are an option.

7. Natural resources: Brand commodities in four steps.
A brand can be created for natural resources, standing in as both a quality guarantee and a provider of emotional satisfaction. This can be done by explicitly linking it to a country or by branding the commodity itself. Examples include Café de Colombia (Colombia), Concha y Toro (Chile), Forevermark (South Africa), Habanos (Cuba), Natura (Brazil) and Premier Cosmetics (Israel).

8. National champion: Leverage strong support from the state.
The states champions a company is and provides subsidies or preferential treatment, such as state resources to expand both domestically and, subsequently, internationally. Examples include China Mobile and Comac (China), Embraer (Brazil), Emirates Airlines (Dubai) and Proton (Malaysia).