Embracing the zigzag – and learning to absorb the pain 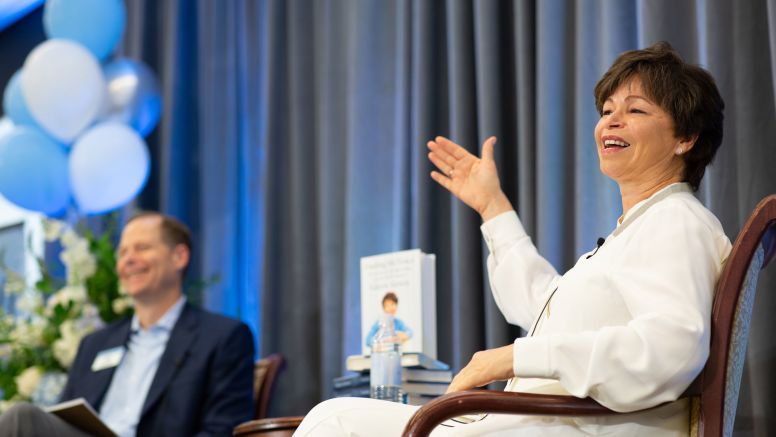 Jarrett served as senior adviser to President Barack Obama from 2009 to 2017, overseeing the Offices of Public Engagement and Intergovernmental Affairs and chairing the White House Council on Women and Girls. Previously she was CEO of The Habitat Company in Chicago, chairman of the Chicago Transit Board, commissioner of planning and development, and deputy chief of staff for Chicago Mayor Richard M. Daley.

After she graduated from Stanford as an undergraduate with a psychology degree, Jarrett made a six-point plan of what she wanted to accomplish in 10 years. She went on to earn her law degree at the University of Michigan, return home to practice law in Chicago and, after almost exactly 10 years, had achieved everything on her plan.

Despite great success in corporate law, she was deeply unhappy. “The soft voice inside of me kept telling me that I needed to change my life, but it’s hard to listen to your voice if you don’t trust it,” she writes in “Finding My Voice: My Journey to the West Wing and the Path Forward.” And when she listened to that voice, she joined Chicago Mayor Harold Washington’s administration and found her calling in a life of public service.

Hofmann asked what advice she would give the alumni in the audience, who are about the same age and stage she was at that time.

“Trust that voice. It’s your voice and you might as well own it,” she said. “Why wouldn’t you trust yourself?”

“You have a safety net with the great education you received. You can do it. You can try it. You can experiment. Work toward something meaningful, even when it’s a grind. If you think you don’t want to do it, don’t. The only adventure is in the zigzag.”

Painfully shy all of her life, she changed while working in city government. When she advocated for and protected the taxpayers of Chicago, “I began to find my voice.”

Leading in the middle

“In many cases during your time in the White House, you were literally in the middle – representing the president, but with limited formal power – what made you effective at getting things done?” asked Hofmann, who designed the “Leading in the Middle” course taken by alumni at the reunion. 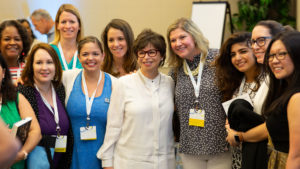 “Begin with listening,” said Jarrett. “I used my good offices to bring people together.”

She made people feel safe to disagree – without being disagreeable.

“When you bring people who disagree into a room their disagreements, the tone changes – the language is different.”

When you are transparent, communicate and are open, the process works well and people feel heard, she said. Keep pushing and don’t just talk – be responsive and get things done.

An example of bringing together people who disagree to effect change was her work with Mark Holden, senior vice president of Koch Industries, Inc. “You find strange bedfellows to do the people’s work,” she said.

They found a common cause in criminal justice reform, one of her responsibilities, and worked together effectively for 18 months on prison reform.

“I think it’s good to be uncomfortable. It’s where the adventure is. Be open. Be curious. You never know what is beneath the surface.”

Pastor Rick Warren told Jarrett that “an essential quality of leadership is being able to absorb pain.” Hofmann asked how she learned to absorb the pain without becoming burned out or burdened by the stress.

Take the long view, she advised

“It’s not about you; it’s about the people you are there to serve,” she said. “If you have the opportunity to lead, you have to constantly remind yourself about the greater good.”

It’s really hard, she said, and it’s really important to do. And to keep it from making you numb or debilitating you, practice self-care. When working at the White House, she went to the gym every morning. It’s important to have an an outlet for the stress you absorb all day, she said. Ground yourself, and “you have to laugh.”

Keys to leading, she said, are to listen, be open and transparent, and absorb the pain.

After a career of public service in government, she’s focusing her energies on causes important to her: gender equity, civic engagement, criminal justice reform and reducing gun violence. She is a senior adviser to the Obama Foundation and a senior distinguished fellow at the University of Chicago Law School.

Her litmus test on deciding whether to get involved with causes or organizations is answering a few questions: Do I care passionately? Can I make a difference? Is it time well spent?

Closing the session, Dean Doug Shackelford said he first met Jarrett when she convened business school deans at the White House to determine how to expand opportunities for women in business. He almost didn’t attend because he was a bit cynical after presenting his tax research to Congress and feeling they were interested in sound bites and not real change. At Jarrett’s session, however, there was no press in the room and substantive, important conversations occurred.

“You make us feel better that there are leaders like you who play a key role in this country,” Shackelford said.