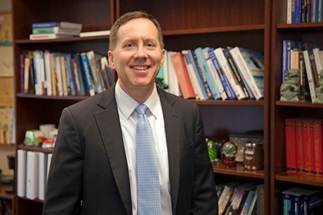 Taxes matter. That mantra drives Edward Maydew to bring clarity to the world of taxes as a teacher and researcher.

“Taxes provide the revenue to fund public services, but they can also have powerful effects on behavior – sometimes intended effects and sometimes unintended,” says Maydew, the David E. Hoffman Distinguished Professor of Accounting. “Policy makers often lack the full set of information to make decisions, especially the connections between tax policy and behaviors. Hopefully my research can shed light on some of these connections.”

Taxes are in Maydew’s blood. His father was an accounting professor, too, and his brother is a tax lawyer. He jokes that they have some sort of genetic disorder that makes them keen on taxes.

“Ed is the quintessential Iowan, the ultimate nice person. He’s neither flamboyant nor shy,” says Doug Shackelford, dean and Meade H. Willis Distinguished Professor of Taxation. “You also should know he drives very slowly, like a little old man, and he’s into deep-sea fishing.” Maydew claims the fishing is only occasional with friends or family, but admits he is often teased for his slow driving.

Growing up in Iowa, Maydew had one of its worst jobs: detasseling the top of corn stalks, says Shackelford, who worked on N.C. tobacco farms when he was a boy. “It was hot, tedious work in the corn fields, but it gave me time to think,” says Maydew.

The Iowa influence is reflected in his academic work in terms of “the clarity with which he thinks about, analyzes and communicates complex information,” says Shackelford. “Ed comes from a stream of University of Iowa academics who are legendary for their analytical clarity and research design expertise. Ed received training about how to study real-world issues in a quasi-experimental way. We don’t typically do ‘experiments’ in accounting, but the way Ed works it’s as if the world ran an experiment for him – applying novel approaches to research questions and producing clear-cut results and  straightforward conclusions in a very complex field. He’s trained his mind to see things others don’t see – it’s a rare gift and a skill.”

Notable for its rigor and impact, Maydew’s research investigates the reasons why effective tax rates for U.S. companies have declined over the last 25 years, even as the statutory rate held steady. He has also investigated round-tripping and the interaction between taxes and financial accounting.

He is prolific too, publishing over 30 papers in leading journals – several receiving national awards and two with over 1,000 citations each. “Mainly I’ve benefited from working with great researchers at UNC and really all over the world,” says Maydew. Another way to measure his academic impact is his service to the journals. Like many business disciplines, there are just a few premier journals – only four in accounting. Maydew is an editor of one of them, associate editor of a second, sits on the editorial board of a third and had been on the editorial board of the fourth for several years.

Maydew’s talents and passion extend to teaching, too. He’s received the Weatherspoon Award for Excellence in Teaching in the Master of Accounting (MAC) Program (twice), full-time MBA Program and PhD Program and, most recently, the Weatherspoon Distinguished Research Award – a career achievement.

He emphasizes time with PhD students. “You work closely with them, mentor them and see them turn into smart researchers,” he says. “You feel like an academic parent to them.”

Maydew brings stories and experiences to the classroom, he says. “Accounting doesn’t have to be boring.”

He made sure the textbook is interesting, too. He is one of the authors of Taxes & Business Strategy, a textbook originally written by lead authors Myron S. Scholes, a Nobel Prize-winner, and Mark A. Wolfson that changed the field of tax research dramatically. “It’s the industry standard, the Bible in our field, and used at the top MBA programs throughout the U.S.,” says Shackelford.

Maydew has consulted over the years, but he is selective in the work he chooses. These experiences often spark ideas for new research. After working on several alleged fraud cases, for example, he wrote a study on fraud. He also testified in a case that went to the Supreme Court.

Shackelford was head of the MAC Program when he led efforts to recruit Maydew from the University of Chicago faculty in 1999. At the time, Maydew’s wife was finishing her OB/GYN residency and the couple was looking for a place to settle down. A few years earlier, they had vacationed in the area with their then 2-year-old son when Hurricane Fran hit. Not even a force of nature, such as Fran, could keep them away for long.

“We still liked it, so we came back,” he says. “UNC Kenan-Flagler is one of the few top business schools located in a great, affordable place to live if you have a family.”

There were other signs he was coming to the right place. “When I learned that the region is called the ‘Research Triangle,’ I knew I would feel at home and that the area would have a bright future because research and innovation are the future,” says Maydew.

“Ed hits it out of the park on all three dimensions of contribution: research, teaching and service,” says Jennifer Conrad, senior associate dean for academic affairs and Dalton McMichael Distinguished Professor of Finance. “He served as area chair of accounting, serves on the promotion and tenure committee, mentors PhD students and runs the UNC Tax Center and the UNC Tax Doctoral Seminar. His teaching is among the absolute best in the School and his research is superb – high quality, widely cited, relevant. He also is one of the nicest people in the building. We are fortunate to have him.”

Since man can’t survive by work alone, Maydew also enjoys spending time with his wife and three children – two daughters in high school and a son, who is a student at rival Duke. “And after I raised him a Tar Heel fan,” quips Maydew. His oldest daughter will attend UNC in the fall, “so at game time it is a classic ‘house divided.’”

A movie buff, Maydew enjoys taking in the latest flicks. Among his many favorites are “Saving Private Ryan,” “Titanic” and, most recently, “The Revenant.” “They’re all great stories of hope, perseverance and loyalty,” he says.

As he and his wife and see the approach of an empty nest, they look forward to more movies and time together. But they both still reserve passion for their work – his in taxes and hers in delivering babies, which Maydew says has some similarities.

“We both help people get tax deductions,” says Maydew.

See, tax experts can be funny after all.