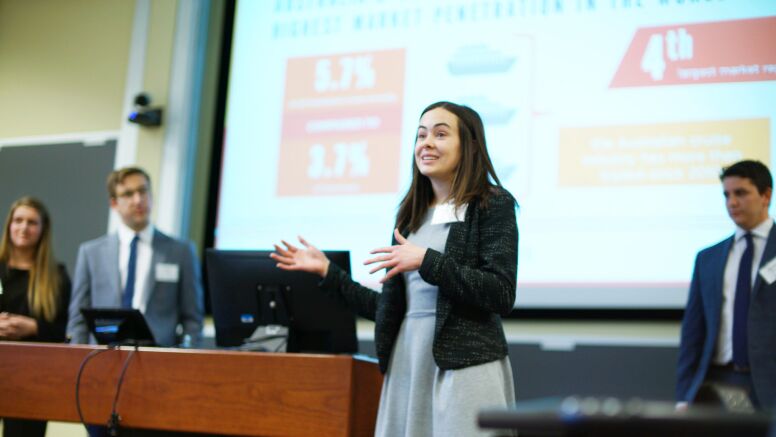 The big idea started with Jessica Schmitz and Phillippa Owens.

Members of the Undergraduate Business Program (UBP) Class of 2019, they had represented UNC Kenan-Flagler in multiple case competitions – “the varsity sport of business school”— domestically and abroad.

They were sold on the experiences – and the powerful benefits – of case competitions. To create the same opportunity for even more students, they wanted to create an international, intercollegiate case competition with big name corporate sponsors.

In December 2018, they took that big idea to Amy Bugno, UBP director of career development and employer relations at UNC Kenan-Flagler. And they told her they wanted to host it before they graduated in early May 2019.

Bugno had seen their work in action, having collaborated with them on the major student-run Consulting Boot Camp and Undergraduate Business Symposium, as well as having navigated complex global situations on UNC Kenan-Flagler global immersions and international case competitions.

So, despite potential obstacles and a serious time crunch, Bugno gave them the greenlight. The three worked together to scale the event to a realistic geographic range; recruited a committee of 10 UNC students; secured two corporate partners; co-wrote a case; planned an intricate, staggered schedule; and launched the day-long event on March 1, 2019. 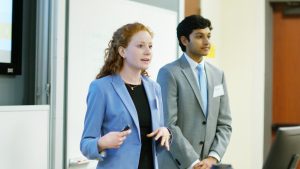 In the first year, 12 student teams from UNC, Duke University and NC State University made an early morning trek to the McColl Building, crammed into study rooms for six hours, and presented their innovative solutions to judges from Royal Caribbean, the client, and EY, the sponsor. After two rounds of competition, the champions were crowned at an awards dinner, where participants and sponsors celebrated their experience, and the committee celebrated the miracle they had pulled off in fewer than three months.

“The success of the Carolina Case Challenge proves that student-driven initiatives can have a huge impact,” Bugno said that evening. “This is really something special.”

When Owens and Schmitz graduated in 2019, the CCC legacy continued. Ricky Estrada (BSBA ’22) and Colin Ham (BSBA ’21), members of that inaugural committee, were inspired by the vision of expanding the program. In 2020, the CCC expanded regionally with the addition of Wake Forest University, the University of Virginia, Emory University and Vanderbilt University. With BCG and Bloomin’ Brands involved, competitors from around the Southeast gathered in Chapel Hill to show their skills and meet like-minded peers.

Coming off of the success of another year, Bugno, Estrada, and Ham were excited to plan the 2021 event, intended to be the first overnight CCC and branch out to schools beyond driving distance. They set off for spring break, with the intention of reconvening after some rest to begin planning. Then COVID-19 sent the world into a tailspin and everything changed.

“Suddenly, we were unable to have the flashy elements that had been so successful before – the things that made attendees from other universities feel welcome, like balloons, banners, T-shirts and especially the welcome dinner and awards ceremony, which foster a lot of informal networking and connections,” says Estrada. “We were worried that without these pieces, student engagement would be lower and students’ connections across schools would suffer.” 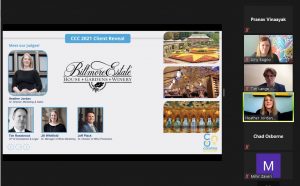 To retain the “vibe” in the virtual format, the team got creative. By adding a scrimmage case, where they mixed up participants into teams of students from multiple schools, students formed bonds across time zones and universities. It was also critical to have the virtual event run seamlessly and have visual appeal, so the team worked hard to plan every detail, including a minute-by-minute schedule and artfully designed slide decks.

The team found some silver linings in this new format, as well.

“In the past, the cost of traveling to Chapel Hill and staying overnight was a barrier to getting participants from outside of the Southeast,” says Ham. “This year, we could invite students from across the U.S. to apply and participate, which we hope will help build a reputation that leaves them more inclined to make the trip in the future.”

The CCC’s successful marketing campaign garnered applications from four new universities, including the University of Michigan, University of California-Berkeley, University of Texas at Austin and University of Washington. In April 2021, 15 teams representing nine schools participated in the multi-day event.

The scrimmage case featured Epilogue Books Chocolate Brews, a Latinx-owned coffee shop and bookstore on Franklin Street, and its possible expansion to another Triangle location. “Students presented recommendations to the owner who said their ideas broadened his thinking on what to do to expand his business,” says Bugno. “This is a great example of a one of the core tenets we teach our students – using business skills to support and uplift our communities. “

After bonding across schools through the scrimmage, teams settled in for the main event. Representing the case client, Heather Jordan, senior director of marketing and sales at Biltmore Estate, announced the case. Students had 24 hours to grapple with a real business problem, create solutions and present their recommendations to a panel of executives from Biltmore as well as EY consultants. During the casing period, EY supported the teams with meal delivery vouchers and virtual coaching visits from its consultants.

Akshay Sambandham competed on the UNC Kenan-Flagler team with Nitisha Jagarlamudi, Charles Osborne and Krithik Chitla, all members of the Class of 2022. He was grateful for the practical experience he gained from the competition. “I had a blast working with my amazing teammates who helped expand my consulting skills. I also learned a lot from watching the other teams compete and present their unique solutions,” he says.

The competition is a win-win-win, says Bugno. Talented students hone their business strategy and analytical business skills, and form meaningful relationships and networks with undergraduates from partners universities across the U.S. Clients help design a case to supplement in-class learning and enhance students’ analytical capabilities, and walk away with tangible ideas that could enhance their business. And corporate partners appreciate meeting and working with talented students from around the U.S., who might eventually apply to their firms.

Two students dreamed big and left a great legacy at UNC Kenan-Flagler. Today, Schmitz is a business analyst at Deloitte Consulting, and Owens is senior strategist at BrightHouse, a BCG Company.

Each year, new student leaders take the reins to run the event with the explicit objective to improve and expand upon the previous year.

“We plan to continue to grow and expand the Carolina Case Challenge year over year, to ultimately fulfill the objective Jess and Phillippa set out in 2018,” says Bugno. “Our hope is for undergraduate students from all over the world to visit Chapel Hill to compete in this challenging, collaborative, fun program where they can showcase their problem-solving skills, represent their home universities and make new friends.”

Schmitz and Owens started CCC because of the experiences an international case competition offers. Three years later, their idea has provided that experience to almost 200 undergraduates.

“From the lasting friendships formed with students, to the invaluable experience that comes from solving real problems for global companies, international case competitions like CCC are unique,” says Schmitz. “The more time I spend in the professional world the more I appreciate how profound the experiences I had were.”