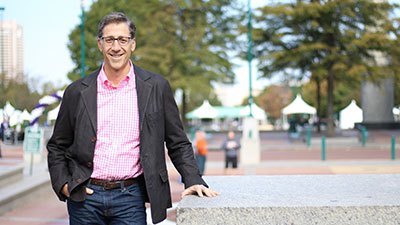 Using visualization to make your dreams a reality was the subject of a recent TEDx talk by Pete Canalichio (MBA ’90), founder, principal owner and president of Licensing Brands, Inc.

“With each dream, I would picture what I wanted, and I would visualize myself in that place,” says Canalichio. “The visualization gave me the clarity I needed, along with the ambition and courage to risk possible failure. As the saying goes, ‘You can’t make a basket if you never take the shot.’”

Canalichio was a Richard H. Jenrette fellowship recipient and salutatorian at UNC Kenan-Flagler. Throughout his career with companies such as Coca-Cola and Newell Rubbermaid, he has worked in more than 40 countries and managed projects across national and continental borders. Before starting his business career, Canalichio attended the U.S. Naval Academy where he earned a bachelor’s degree in physics and served in the U.S. Navy as an aviator during the height of Cold War tensions. He later served in the Navy Reserves, retiring at the rank of commander.

Canalichio is a part-time instructor at Georgia State.

Watch Canalichio explain how he has used visualization to overcome challenges and achieve his goals.