Do your employees have one foot out the door? 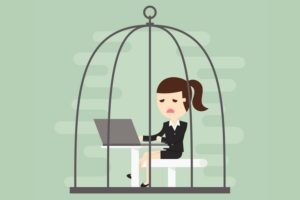 I can’t wait to leave my job.

It’s a sentiment we’ve all heard – and perhaps even uttered ourselves – during casual conversations with family, friends and co-workers. But the intention to leave your job isn’t simply a matter of internal conflict – it affects the way you work.

Jessica Christian, clinical assistant professor of organizational behavior at UNC Kenan-Flagler, studies the dynamics in the workplace. Her research – conducted with Ke Michael Mai of the National University of Singapore, Alexander Ellis of the University of Arizona and Christopher Porter of Indiana University – shows that turnover intentions play an interesting role in employees’ workplace behaviors.

Employees who plan to leave their jobs have weaker “relational contracts” with their organizations – and don’t think about their long-term future there and don’t care as much about forming bonds.

Working for the paycheck
We’ve all been there – tapped to help a colleague struggling to finish a project on deadline or one who’s having trouble adjusting to a new work environment. But helping out around the office isn’t explicitly written into most job descriptions.

What difference does it make? A big one, as it turns out. Employees with high turnover intentions tend to have a more transactional relationship with their job. They work strictly 9 to 5 in exchange for a paycheck. While this doesn’t necessarily mean they will be slacking off, it does mean they won’t go above and beyond to facilitate a more efficient office environment.

Behaving badly
Higher turnover intentions have a positive correlation with bad behaviors at work. While these behaviors can be fairly innocent – think slacking off or not putting in much effort – they might be much more serious, such as stealing or lying.

In some cases, employees might think their deviance behaviors are justified. Christian’s research reveals that when employees blame their organization for the reasons they want to quit – whether they resent a difficult boss, dislike working long hours or feel they are being treated poorly – employees’ deviance behaviors were amplified. And sometimes, employees didn’t consciously recognize their actions as deviant.

Preventing the problem
Monitoring turnover intentions is easier said than done, but it’s critical to the success of your organization and its employees. In the absence of information, you have no idea who wants to leave, when they want to leave and, most importantly, why they want to leave.

Christian suggests using surveys to gather data that can help explain employee turnover within your organization. Even when they are anonymous, surveys provide a window into the minds of employees.

Fairness is also critical to discovering employees’ true intentions. When employees are treated fairly – from procedural processes to interpersonal interactions – they are more likely to report their intentions honestly.

Organizations obviously don’t want their employees to leave, but the consequences of turnover begin well before people walk out the door for good.

Prevention is the best tool for managing turnover intentions. By making employees feel embedded in the organization, they’ll be less likely to think about leaving in the first place.

Make sure your employees are a good fit with their work, and help them build connections with  co-workers. Encourage collaboration and team building activities to help foster meaningful relationships between employees.