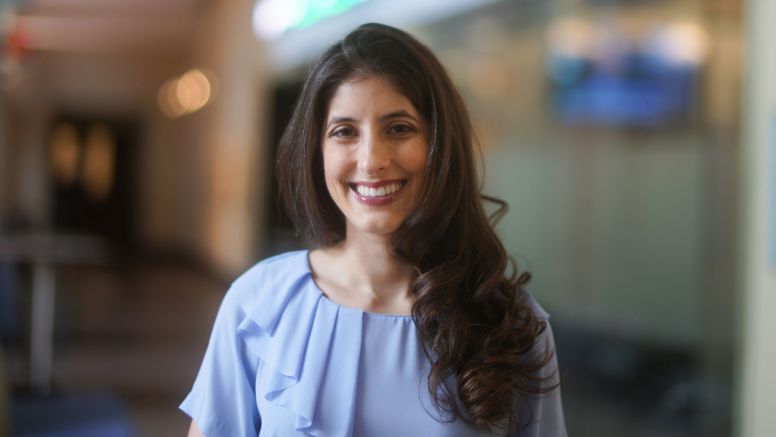 Alivandi (MBA ’19) had to learn to walk and talk again in the year before applying to the Full-Time MBA Program. Her presence at UNC Kenan-Flagler – her vitality – is something of a miracle.

Life took a devastating turn for Alivandi on March 20, 2015. She was driving to work from the gym. Stopped at a red light, a car hit her from behind and set off a domino effect that caused another car to hit a pedestrian, a teenager. But Alivandi doesn’t remember any of that. In fact, she lost the next four days of her life. The last thing she remembers is getting in the car on the way to her workout. When the other driver’s car crashed into hers, Alivandi lost consciousness and her car caught fire.

A good Samaritan, Ronaldo Freitas, was taking his son to school when he witnessed the crash and went to the rescue. He broke a window and dragged Alivandi out of the car, which was engulfed in flames. She did not get burned at all. Freitas rarely took his son to school, but did that day because his wife was not feeling well.

“There was a really wonderful series of fortunate consequences – the paramedics, who quickly recognized my traumatic brain injury, getting to Massachusetts General Hospital, where my neurosurgeon was at the ready,” says Alivandi. “It was one of the fastest turnarounds in the hospital’s history.”

Still, she had a long recovery ahead of her. In total, Alivandi sustained a subdural hematoma, four broken ribs and a tear in her retina that left her blind in one eye for six months. While she was in the hospital, doctors asked her to complete a simple task – make a cup of instant coffee – as part of her occupational therapy. As she read the directions over and over again without understanding what to do, Alivandi realized what challenges lay ahead.

“I felt my brain was my most valuable resource,” she says. “Losing that and having to relearn the most basic task was indescribably challenging.”

Yet, she persisted. “I resigned myself to be the best brain injury patient ever,” says Alivandi.

Always a high achiever, she decided to beat the odds. Her doctors told her it would take three to four months to leave the hospital with months more of therapy ahead of her. They suggested it would take at least a year before she could return to work.

Instead, Alivandi left the hospital one week after her surgery. Her family rallied around her. Her mother retired early, and they moved in with her brother and his family. They stuck by her until she regained her autonomy.

Just as she would have done in her professional life, Alivandi created a project management plan. Every exercise the doctors suggested doing one time, she did twice. She drafted key milestones and day-to-day tasks she needed to achieve her six-month recovery goal. Once in a while, however, she allowed herself a bit of grief and thought about potential outcomes.

“It was scary to think about the possibility that I would not be as witty or as smart,” she says. The thought only motivated her more.

Alivandi was back at work within six months of the accident, and had completed her first triathlon within a year. She also began applying to business schools.

“Once I felt better, I wanted to keep going on with my life,” she adds.

As a college student, she had interned in the U.S. Senate. She went on to work as an acquisitions research fellow with the U.S. Department of Defense and in business development for a defense contractor.

While trying to win business for the company, Alivandi realized she didn’t want to continue the work for the rest of her career. So, she returned to her alma mater, Tufts, where she helped craft technology solutions to connect alumni and donors with the university.

When seeking an MBA program, Alivandi wanted something completely different from her undergraduate experience at a small liberal arts college, Tufts University, in Massachusetts. A double major in international relations and the Arabic language, Alivandi also was not the typical MBA candidate. As a result, she wanted a big university that would be welcoming to a non-traditional applicant.

Then it came time to gain more business skills, and she chose UNC Kenan-Flagler because of its culture.

“I really love the core values,” says Alivandi. “I’m competitive, but I want to be competitive with myself, not my classmates.”

Throughout her time at UNC Kenan-Flagler, Alivandi has been involved in a variety of clubs. She’s vice president of two career clubs – Net Impact and Operations Management. As a vice president for Community Service, Alivandi organizes service days throughout the year where students can give back to non-profits in the area.

She also served as a career mentor for first-year MBA students, and will participate in the Hodges Leadership Capstone course.

Now, she’s looking to a future beyond her brain injury and earning her MBA.  Her summer internship was in global procurement at PepsiCo in Purchase, New York, and she accepted a full-time role in tech strategy for E&J Gallo Winery in the Bay Area, California.

Ultimately, Alivandi hopes her career trajectory leads her to a place where she can help people and have a social impact. For now, she’s excited to experience a new industry and take on a more strategic position.

While Alivandi is a hard worker, she also makes time for her passions. For 25 years she practiced classical ballet. With a passion for health, Alivandi also ran a volunteer program for girls in which she taught them about nutrition and wellness.

A foodie, she enjoys conceptualizing recipes, including one for spicy shrimp tacos with cilantro crema and whipped avocado. She also makes a mean chocolate cake.

As a lover of travel, Alivandi has been to over 30 countries. During her time at UNC Kenan-Flagler, she studied in Chile and Peru on the Sustainability and General Management Global Immersion Elective, and visited Thailand, Singapore, Denmark and Germany. A favorite trip was meeting up with friends in Berlin.

To commemorate her accident – what Alivandi calls a “lifeaversary” – she celebrates with a new adventure every spring. Once she dyed her hair. This year, over spring break, she is visiting Spain and Portugal with a group of MBA classmates.

“I try to appreciate life,” she says. Indeed, she does not want anyone feeling sorry for her.

“People can become so focused on my story and struggle. But this accident does not define who I am,” says Alivandi. “Yes, it’s one bad thing that happened to me. And this one bad experience has led to a host of other incredibly positive experiences. That’s what I choose to focus on.”