Skip to content Skip to Programs Navigation
David Ravenscraft: Making an impact through teaching and leading

David Ravenscraft: Making an impact through teaching and leading 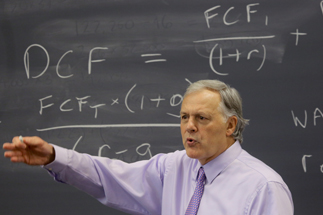 David Ravenscraft is a case study in how professors can have an impact through the academic trifecta of research, teaching and service.

“For nearly 100 years, UNC Kenan-Flagler Business School has thrived because extraordinary faculty have placed our mission and students first, and Dave Ravenscraft exemplifies the excellence-with-humility that marks everything we do,” says Doug Shackelford (BSBA ’80), dean and Meade H. Willis Distinguished Professor of Taxation. “Beloved by alumni and students, he is a living legend who has left his mark on every aspect of the School.”

While he prefers research and teaching, Ravenscraft says service is where you can have the greatest impact. He has been recognized for extraordinary contributions leading the Undergraduate Business, Executive MBA and PhD Programs at UNC Kenan-Flagler, though he is quick to give credit to the team of faculty and staff with whom he worked.

Ravenscraft’s impact is most evident in the innovative Global OneMBA® Program, designed by a partnership of five top business schools for business professionals who work and live around the world. Known as an architect of OneMBA, Ravenscraft was the key to launching the program in 2002 and making it work across cultures, time zones and continents. Fifteen years later, OneMBA counts 1,400 graduates are in senior leadership positions in more than 50 countries.

“OneMBA is my best single achievement,” says Ravenscraft. “But you could say I’m one of the key catalysts. It is an equal partnership of five schools and required a team effort from faculty and senior staff leaders to provide unique experiences for our students. I don’t want to take too much credit for this.”

But his contributions are well known at UNC Kenan-Flagler and documented in “The Shifting Frontiers of Academic Decision Making,” which analyzes the complex and thoughtful process behind creating such an innovative program in partnership with four other global business schools.

That’s not to say building the program was easy. While laying the groundwork, Ravenscraft learned several vital lessons. For starters, he gained a deep appreciation for his OneMBA colleagues from other countries who helped him understand cultural differences that surfaced when problems arose. By working together, they learned to respect different approaches and keep communication channels open to create a strong partnership. This led to a personal benefit, too: the architects of OneMBA all remain good friends to this day.

Learning to prioritize and compromise was also part of the deal. But for Ravenscraft, the most important lesson was a personal one.

“I spend a lot of time on whatever I do,” he says. His unflagging dedication, long hours and heavy travel led to health problems that landed him in the hospital. In the end, he had to step away from his OneMBA leadership role.

The experience made him recognize that resting and exercising are gifts to those around him. “You need to schedule that ‘me’ time,” he says. “I’m good at giving the advice – not good at taking it.”

Ravenscraft went on to serve as associate dean of the Undergraduate Business Program, where he used his OneMBA expertise to expand the prestigious Global Learning Opportunities in Business Education (GLOBE) Program with partners Chinese University of Hong Kong and Copenhagen Business School.

When it comes to teaching, Ravenscraft is well-known for his commitment to helping students succeed. “Professor Ravenscraft’s passion for learning is truly infectious,” says Connor Daly (BSBA ’16), an equity research associate at Brandes Investment Partners in San Diego. “He taught me to be a lifelong learner.”

Ravenscraft focuses on mergers and acquisitions (M&A) now – and he wasn’t kidding when he said he goes all in with whatever he does. He teaches 10 to 12 sections of M&A – two to three times the usual faculty workload – across programs.

“I’m given the opportunity to influence the students I teach, and that’s a really good feeling,” he says. “I value the intersection of academics, theory and concepts on one end and practical application on the other. I love to bring those two together.”

Ravenscraft has received numerous awards for his teaching and dedication, including the Roy W. Holsten Exceptional Service Award – the highest honor for contributions to the Business School community – and multiple teaching awards for the full-time MBA, Undergraduate Business and OneMBA programs.

“I have seen the amount of time he devotes to his students,” Anne Burke Baldridge (BSBA ’16), an investment banking analyst at J.P. Morgan, told Poets & Quants. “He taught me that fulfillment in any career should not be defined solely by personal achievements; it should instead be measured by the impact we have on others.”

Ravenscraft launched his career as a Federal Trade Commission research analyst after earning his PhD at Northwestern University. In 1987 the opportunity to do research with UNC Kenan-Flagler faculty brought him to Chapel Hill, where he became an award-winning researcher.

Ravenscraft was awarded a chaired professorship – the Fulton Global Business Distinguished Professor of Finance – for his contributions as a scholar-educator. . He worked closely with former dean Paul Fulton (BSBA ’57), who donated the chair and designated it be re-named for Ravenscraft whenever he retires.

“Except for a very few people like Bill Friday, Frank Kenan and Coaches Smith and Williams, Paul has had more impact on UNC – and particularly Kenan-Flagler – than almost anyone,” says Ravenscraft. “The incredible generosity of people like him makes this an amazing place to work.”

And Chapel Hill is a great place to make home. Ravenscraft and his wife have a blended family of six kids. One son has high functioning autism and another has Down syndrome and autism, and the help available in the area has kept him anchored in Chapel Hill.

Reflecting on his Carolina career, Ravenscraft is Zen. “I’m a big fan of balance and I am still trying to achieve that,” he says.

“Education, when done right – and we do that here – has such a profound long lasting impact on people’s lives,” says Ravenscraft. “We are all fortunate to be in positions where we have an opportunity to make a difference every day. That is our source of motivation and achievement.”