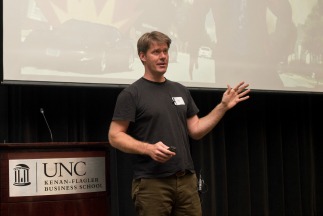 Chris Lindland (BSBA ’95) made his big break into the fashion world in the most unlikely of ways: pants.

Corduroy pants, to be precise.

Lindland designed Cordarounds – corduroy pants with horizontal ridges – as part joke, part opportunity to develop his creative marketing portfolio. The horizontal ridges could lower the average wearer’s crotch heat index by 22 percent, he claimed. Although the idea was pure pseudoscience, the pants quickly became an internet sensation and were featured by The New York Times, The New Yorker, Adweek and many more.

After the unexpected success of Cordarounds, Lindland began to view the internet as a place where designers could share and get support for their fashion ideas – the 99 percent of ideas that would otherwise not be seen beyond the pages of their sketchbooks.

In 2009 Lindland launched Betabrand, an online community that crowdsources innovative clothing concepts and prototypes from designers and gives consumers the opportunity to co-design and crowdfund the products they like.

“My goal was to start a company where I could publish cool and new ideas all the time,” says Lindland.

And that’s exactly what he’s done. Thanks to Betabrand, professionals can now don Dress Pant Yoga Pants – dubbed “the most comfortable pants you’ll ever wear to work” – or pull on a dapper, pinstriped Executive Hoodie.

After graduating from UNC Kenan-Flagler’s Undergraduate Business Program in 1995, Lindland went on to launch and co-found four internet-based businesses ranging from file storage to fashion, an industry ripe for disruption. The internet provided the perfect platform to shake things up.

“Fashion – a huge, trillion-dollar industry – is under an unrelenting, nonstop attack by this thing called the internet,” says Lindland. “It’s really tearing at the foundations of the industry as we know it.”

The internet delivers retail services far more quickly and efficiently than traditional brick and mortar stores can. But perhaps the biggest weakness of the traditional retail model is that it doesn’t allow businesses to react quickly enough to consumer preferences. Lindland points to the industry’s signature Fashion Week events as a prime example of the disconnect between changing consumer behavior and traditional retail business models. The looks designers send down the runway are styles they believe everyone will wear nine months down the road – a concept Lindland just can’t wrap his head around. “There are major brands that are very convinced that we’re going to all be wearing fuchsia a year and a half from now,” he says. “That strikes me as insane. In the era of instant information available via the internet, there’s a global collusion that says this shade of purple is in all of our futures.”

In addition, retailers are overwhelmingly conservative when choosing which designs to stock. “What I’ve found over and over is that the designs that merchants wanted to pick [but chose to play it safe instead] are the ones consumers really wanted to buy,” says Lindland.

With Betabrand, he’s flipped the script. Rather than creating and holding massive amounts of inventory, the company creates only one prototype of each product and waits until enough people have invested in it – a la Kickstarter – before beginning production.

The beauty of the model is that consumers crave the opportunity to own an innovative new product – so much so that they’re willing to invest upfront and wait for the item to be produced.

To remain relevant, Betabrand looks for opportunities to tie into current news and events.
“We try to be fashion’s first responders,” says Lindland. “If there’s a news story that breaks, we want to be the first clothing company to insert itself into the narrative.”

When word spread that Facebook would be announcing its IPO, Lindland found an opportunity to capitalize on the buzz. His Betabrand team turned common suit cloth into a pinstripe “Executive Hoodie” – the perfect look for Mark Zuckerberg to sport when taking his company public. The idea was a hit, garnering more than 1,000 orders of the dry-clean-only jacket and lots of media coverage for Betabrand.

At Betabrand, consumers set the tone and inform the decisions the company makes. In fact, one of the biggest decisions – whether the company would offer clothing for men or women – was informed by consumers. Lindland launched Betabrand primarily as a menswear company. But after launching its crowdfunding platform, he found that 85 percent of buyers were women. Lindland didn’t set out to sell more clothes to women – he expanded the company’s offerings based on consumer feedback and demand.

Betabrand doesn’t produce designs that are fashion forward – it offers products that are fashion forwardable. A large part of the company’s success comes from letting customers tell the story. Whether through a viral video of base jumpers wearing Disco Pants or the creator of Suitsy – a onesie for the business casual crowd – sharing the inspiration behind his design, letting consumers drive the narrative leads to the creation of buzzworthy, shareable content that builds brand awareness and expands the company’s customer base.

Making decisions based on data

Betabrand uses data science to make informed decisions. Instead of having their marketing team analyze product images and carefully craft copy to go with them, they take about 100 photos of each product and drafts just as many variations of copy. Those files are then plugged into a software program that creates permutations of advertisements featuring different photos and messaging to determine which combination garners the highest click-through rate. The process reveals seemingly minor details that influence consumer behavior. For example, Betabrand has discovered the ideal beard length for its male models and found that men are more likely to click on ads for pants when the image features a crotch.

“We do this again and again and again,” says Lindland. “We discover amazing things about human nature by way of what the data tells you people are clicking on.”

Betabrand found success by doing the unexpected – from offering an array of unique, quirky apparel to recruiting only models with PhDs for the launch of its women’s line.

Deviating from industry norms has paid dividends for the company, which has garnered global press coverage while winning the hearts and wallets of consumers – and other brands are taking notice.

In 2017, Timberland partnered with Betabrand to crowdsource product designs for its footwear line. The collaboration was the first of many, says Lindland, who plans to expand Betabrand as an R&D platform for all kinds of consumer brands in the future.

“Thanks to our innovations, creative design companies around the world are taking a new look at their development processes,” he says.