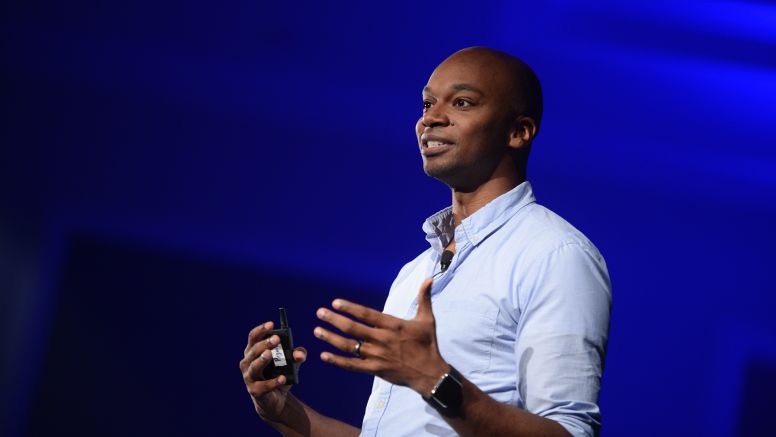 The issue of racial inequality is rising rapidly up the corporate agenda following the global Black Lives Matter protests. And the earnest statements of intent by company bosses around the world to stand against racism have been music to the ears of Khalil Smith (MBA ’13).

He has made it his mission to encourage a more representative workforce and improve the inclusion of different ethnicities, genders and backgrounds.

Smith has built the diversity and inclusion practice of the NeuroLeadership Institute (NLI), where he is vice president of research, practices and consulting. He is responsible for strategy and market presence for the consulting firm, which has offices in New York, London and Sydney.

And, as an African American with a Latina wife and two interracial children, the protests have personally affected Smith.

“My eldest son is 21 and I do worry about him. I’m also heartbroken about Covid-19,” he says, adding that the crisis has hit African Americans especially hard, compounding the sense of inequality in society.

But while he says the increased awareness of racial justice is a positive development that is long overdue, he wants words to be followed by action.

“Just to be outraged is not enough,” he says. “What we need to do is fundamentally change the systems in place that have led to this movement. Let’s go beyond the rhetoric and get to the details.”

That is Smith’s specialty: He has advised dozens of leading companies on how to create a more diverse and inclusive workforce.

“Being inclusive is about pulling apart unconscious bias, stimulating employee engagement and advocacy,” he says. “It can create opportunities for people that otherwise would not have them.”

Smith led teams in one of Apple’s first retail stores. This seeded his transition to the corporate side of the business, where he led important elements of the training and development of Apple’s 60,000-plus retail employees.

“My task was to ensure the culture in the Apple store in New York was similar enough to Paris or Barcelona, but still with a local flavor,” Khalil says. The stores, with their glass walls and wooden tables, are now iconic and among the most profitable in the world.

His role also involved helping to launch the Apple Watch — a top-secret project. “We taught tens of thousands of employees how to create an entirely new customer experience that is more hands-on than buying an iPhone,” he says.

A decade of hard work helped cement Smith’s reputation inside Apple, but “outside the company no one knew my name,” he says.

So, he sought an MBA to raise his credibility on the job market. And he was sold on UNC Kenan-Flagler’s culture of collaboration. “I wasn’t going to have to compete against my classmates. I would compete with them,” he says.

Smith was distinctive for not having a bachelor’s degree. College graduation wasn’t an option; he married his high school sweetheart and had his first child when they were relatively young.

He praises Anne-Marie Summers, the now-retired director of the Weekend Executive MBA Program, for taking a chance on him and offering him a place at UNC Kenan-Flagler.

“For a lot of schools, my background was a non-starter,” says Khalil. “UNC Kenan-Flagler was a place willing and able to see beyond my background. They saw the potential that I saw in myself.”

He brought his experience at Apple to bear in the MBA program, enriching classroom discussions with his perspective on the company, which was enjoying a breakout year in 2012 when its revenue and stock soared to new heights.

“I was going through the program when Apple was at the top of the world,” Smith says. “Every fifth article or business book was about Apple. I was passionate about the company and it helped push the discourse forward.”

The experience boosted his confidence, improved his quantitative skills and gave him a global network of like-minded peers who voted for him to deliver their commencement address in 2013.

He continued to work at Apple before taking the drastic step to leave after 14 years at the company to create his own consulting firm in 2016.

“If you erase the MBA from my history, I doubt I would have had the confidence to walk away from a company at the top of its game, a very good salary, bonuses, and stock options,” he says. “I was willing to gamble on myself.”

He helped small- and medium-sized firms to improve their learning and development programs — an experience that sparked a passion for marrying social psychology, behavioral economics and business management.

That new focus led him to turn down a job offer at a top consulting firm because “the predictability of going back to a large organization didn’t appeal to me,” he says.

Instead he joined the NLI, which uses neuroscience to help make companies more human through science. The firm wanted Khalil, an effective communicator, to expand its diversity and inclusion practice and become a vocal force for positive change in the business world.

“I wanted to become a bigger fish in a smaller pond and help transform the working culture of large organizations,” he says.

He’s also changing organizations through his writing. He shares his ideas and expertise in his articles published in Forbes, strategy+business, Quartz, Harvard Business Review, Business Insider, and in an interview on National Public Radio.

Smith is helping UNC Kenan-Flagler with its diversity and inclusion initiatives. He’s advising the Undergraduate Business Program on how to improve Black representation.

“Universities, not just at Chapel Hill, have great academic research on diversity and inclusion, yet they often don’t practice what they preach,” he says. “They need to harness that intent and think deeply about building systems to create more opportunities for traditionally underrepresented groups.”

He is passionate about giving back to the Business School that has given so much to him, he says. “I can’t think of a better way to use the skills I’ve gained than to give back to such a storied and important institution.”

Smith loves the work he’s doing at NLI. As he thinks about how to continue to make a lasting impact, he is considering future opportunities, such as an advisory role in government.

“Potentially, I could help a candidate do great work, pass great legislation and have a positive impact on the world.”