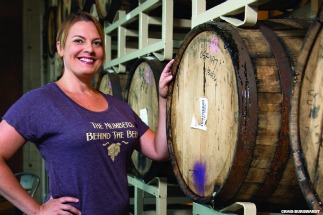 Audra Gaiziunas (MBA ’08) is brewing her own destiny – and elevating the craft beer industry along the way.

She’s made it her job – literally – to help craft beer brewers understand and execute business plans while tending to their art.

“I possess the insight, strategic focus and specialized numbers knowledge in the areas many brewers fall short – but because I’m a home brewer, I understand their way of thinking,” says Gaiziunas. “I bring the left brain to right-brain people, but I speak their language because I brew beer, too.”

A perfect blend
The child of Lithuanian immigrants, Gaiziunas grew up traveling the world with her parents. She attended American school during the week and Lithuanian school on the weekends.

After deciding to attend grad school, she was drawn to UNC’s Global OneMBA, a one-of-a-kind executive MBA program offered in partnership by five top business schools. The program gave Gaiziunas the opportunity to study in Brazil, China, Mexico, India, Poland and the Netherlands and immerse herself in each country’s culture and way of doing business. But the best part of the program was building a network of friends and colleagues around the globe, she says.

After earning her MBA, Gaiziunas worked as a commercial pricing consultant at Caterpillar, Inc. Though she gained many valuable tools from the corporate world, she wanted the freedom to pursue her creative side in a fast-paced, entrepreneurial environment devoid of a rigid structure. She landed a job as the controller for Dogfish Head Craft Brewery in Delaware, where she realized that the craft beer industry and culture was a great match for her personally and professionally.

Brewing up business
In 2011, Gaiziunas was hired as the chief financial officer of Mother Earth Brewing Company in Kinston, North Carolina. The opportunity turned into her full-time obsession, and she quickly became well-known in craft beer circles as a financial thought leader.

After realizing she could offer similar services to multiple breweries at once, Gaiziunas launched Brewed For Her Ledger, LLC – a brewery consulting business – in mid-2013.

The biggest problem facing startup breweries is a lack and understanding of working capital. Gaiziunas helps business owners navigate this challenge by teaching them about financial models and analysis, helping them obtain financing, training them to use inventory and financial management software, and setting up processes to manage taxes and accounting.

“Numbers tell a story,” she says. “Once the breweries open, I provide oversight like a brewery financial guardian angel.”

As a consultant, Gaiziunas has racked up some big wins. She served as interim CEO of Tin Roof Brewing in Baton Rouge and Bhramari Brewing Co. in Asheville, which extended her contract after she worked with the executive chef and brewer to develop a plan for their first major expansion.

At Charlotte’s Resident Culture, Gaiziunas provided guidance, vetted pro forma reports and provided validation for getting the brewer to relocate.

“Audra’s knowledge and experience in the industry has really helped us understand the state and federal tax and regulatory landscape, which is no easy task,” says Phillip McLamb (UNC ’05), co-founder of Resident Culture. “I have no doubt we will continue working with her as our brewery grows.”

Gaiziunas’ ability to provide financial planning, accounting and leadership to budding breweries is what makes her stand out.

“Audra helped us get off the ground when we were just starting up and got us moving on the right foot from an accounting and documentation standpoint,” says Erik Lars Myers, CEO of Mystery Brewing Company in Hillsborough. “As a new business owner, I wasn’t entirely sure what the best way to keep records was – and accounting wasn’t necessarily my forte. Audra was incredibly helpful and was instrumental in Mystery’s early startup phase.”

Another shining moment came during her time at Durty Bull Brewing Co. in Durham. Gaiziunas helped the founder build his company from idea to reality – from creating pro formas for capital investments to being by his side as they closed on loans.

Gaiziunas has become somewhat legendary in the industry. Oak Road Brewery in Summerville, South Carolina dubbed her the best in the business, tweeting, “You’re almost like a brewery version of Johnny Appleseed!”

Sometimes the job requires Gaiziunas to speak candidly with clients.

“Audra’s honest and sometimes painful assessments of our practices are always balanced by her friendly face and humorous disposition,” says Brad Casanova, co-founder of Archetype Brewing in Asheville. “She’s like a dentist you look forward to visiting. It might hurt a bit, but vulnerabilities don’t get any better if you ignore them.”

The tough-love mentality is something Gaiziunas picked up, in part, during her OneMBA studies. UNC Kenan-Flagler professors Paolo Fulghieri and Alan Neebe gave her greater flexibility to create financial models, while her international classmates taught her the nuances of working across cultures.

Running a startup that helps other up-and-coming businesses can be stressful, admits Gaiziunas. She knows firsthand that the early cash-strapped years in a new business can get to people – but persistence, time and an open mind are key to success.

Putting in the hard work is also a must. “Hope is not a strategy,” she says, quoting professor Hugh O’Neill.

By drawing on these lessons, Gaiziunas has been able to make her dream of being her own boss a reality. And her contributions to the craft beer industry have not gone unnoticed in the community.

“Audra has a unique and deep understanding of the business of craft brewing, and she shares our passion for fresh, local beer,” says Jim Jones, co-owner of Joymongers Brewing Co. in Greensboro. “She is a friend and a fan of small business owners who work every day to entertain and educate our communities on the advantages of local breweries as family-friendly community centers.”