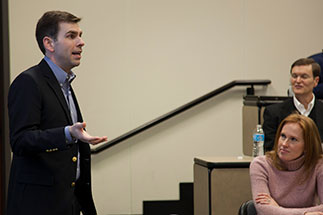 Ted Wentz (MBA ’08) test drove a few career paths before he decided he did – after all – want to join the family business started by his father, a retired race car driver.

Wentz began his career at the U.S. Department of Homeland Security, Transportation Security Administration after graduating from the University of Virginia with a degree in foreign affairs. He worked in a variety of roles during his tenure there, including serving on the first Department of Homeland Security team created after 9/11 and chairing a pandemic influenza task force.

His next step was to attend UNC Kenan-Flagler Business School to hone his leadership skills.

“When I came to UNC Kenan-Flagler to earn my MBA, I had been working for the government in project management, which is a world based on budget,” says Wentz. “The business world, however, is based on maximizing profit so UNC Kenan-Flagler was huge for me in making that pervasive change.”

“At UNC Kenan-Flagler, I found a place that not only gave me strong knowledge, but that also gave me the ability to use tools from analytical and mathematical perspectives,” says Wentz.

After graduation he took a two-year leadership rotation at his family’s business Quadratec, a retail company that is a worldwide leader in providing Jeep aftermarket parts and accessories.

His next step was to fulfill his goal of starting his own company. He founded FireCraft, a grill supply company, before he took on an even bigger challenge in October 2017: chief executive offer of Quadratec.

Wentz welcomes the opportunity to use his leadership skills, managing more people with more accountability measures in place, at his family business.

“Having accountability is good,” he says. “I have a boss now and a board that I have to report to, which I didn’t have at FireCraft. There is some danger in not reporting to a group of people so working at Quadratec has shown me the power of having accountability.”

As Wentz fully transitions into his leadership role at his family business, he still uses UNC Kenan-Flagler’s core values to guide his professional decision-making. 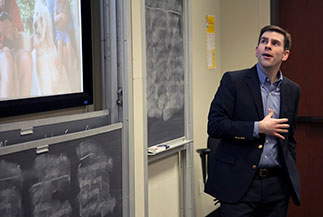 For Wentz, leadership means “learning to be the leader of a large group of people and putting science behind it, which the classes at UNC Kenan-Flagler helped me do.”

“My job at Quadratec is 100 percent about managing people and setting strategies and goals,” he says. “I really enjoy doing that. As an executive, your primary role is to make sure that employees do what they are supposed to do and to encourage them.”

Wentz, however, did not wake up one day magically prepared to lead employees. Rather, his time at UNC Kenan-Flagler taught him to effectively implement soft leadership skills.

“I really learned to talk about how you, as a leader, empower employees and make it so they can cohesively achieve goals. This is a pretty rare skill to be taught at an MBA program, but I knew I wanted to be a leader in an organization so I came to UNC Kenan-Flagler.”

Former leadership coach Bill Grumbles also taught Wentz – who was elected president of the General Management Club – the value of strong leadership skills in a course for the presidents of student club leaders. Grumbles taught how to “manage smart people that know more than you do,” says Wentz, who still contacts his former professors for advice.

Participating in a community is a two-way street so Wentz purposefully contributes to the UNC Kenan-Flagler community that was so influential in his life.

“Community is about learning to be part of something that you chose and moving forward with it,” he says. “It’s about give and take, but you should do more giving than taking.”

Wentz regularly connects through the Family Enterprise Center. As the first MBA student to take a family business class, Wentz has plenty of personal experiences to share with undergraduate and graduate students who are enrolled in the center’s Family Business Courses.

He also participates with the Family Enterprise Center roundtable discussions during which he gives “structured advice” to students. For instance, Wentz highlights the importance of communication among employees at family businesses, such as Quadratec.

“You have to do your best to live and communicate in a place of true honesty,” says Wentz.
“Be able to communicate with yourself and your family members about what you want, what’s important to you and how you feel. If you can’t be truly honest, you are going to bump into difficulties. Everyone already knows if you are being dishonest, so the faster you get there, the more successful you will be.”

He also shares what he learned at FireCraft with aspiring entrepreneurs. “You want to talk to as many people that started a business as you can who have similar educational backgrounds,” he says. “Starting your own business is very different than what your typical colleague from an MBA program will do. You’re going to have a different lifestyle and way of earning money so you want to know what that’s like. There’s simply no internship for that.”

Wentz graduated from UNC Kenan-Flagler equipped to work well on a team.

“It’s easy as a CEO to act as a dictator,” he says, “but everyone can have great ideas that need to be heard. I worked on a team at UNC Kenan-Flagler with no real team lead and the experience forced me to remember that.”

Wentz applies the significance of effectively operating in a team setting to the family business realm. “You need to separate work and personal relationships as much as you can,” he says. “You can’t go into a meeting and have a father-son fight over what should be a boss-subordinate battle.”

In essence, Wentz’s teamwork focus includes the importance of good communication with employees, especially within a family business. If people are not open and honest with one another, he says, they can’t effectively work toward a common goal.