Consider a life of impact 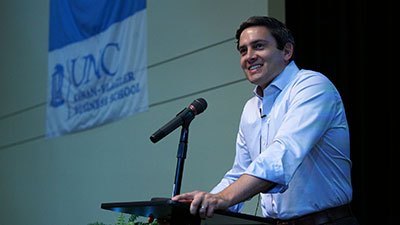 During his time in the private sector, a social enterprise and the public sector, Rye Barcott (BA ’01) has learned many lessons that have helped him lead a career with impact.

Barcott is managing partner and founder of Double Time Capital, an investment firm focused on investing in companies dedicated to energy independence and energy sustainability.

While an undergraduate at Carolina, Barcott, co-founded Carolina for Kibera, an international nonprofit dedicated to developing local leaders, catalyze change and alleviate poverty in the Kibera slum of Nairobi, Kenya. After he graduated, Barcott was commissioned with the U.S. Marine Corps.

Only 5 percent of the world’s population has a college degree, he says, given the scarcity of the world’s resources, he asks these people to consider a life of impact. “Impact is how you personally define it,” he says.

Barcott discussed pursuing a career with impact at an event hosted by UNC Kenan-Flagler’s Net Impact Club and challenged the audience to think about the privilege that young professionals are granted through their education.

Barcott – who co-founded Double Time Capital three years ago with a friend from the Marine Corps – learned about the importance of partnerships when building his own company.

“One of the reasons that partnerships can be valuable is that no matter how smart an individual is, they always have blind spots,” he says. “A good partnership helps complement those blind spots.”

Barcott and his partner try to make each other better every day. This means being able to communicate both positive and negative feedback. Wanting your business partner to succeed just as much as you want to succeed is critical, he says.

While working on Carolina for Kibera, Barcott learned the importance of developing trust on teams –developing partnerships to the point that all parties feel secure.

“When you are working with someone very closely and you are not invested in each other’s success it can be a toxic combination,” he said.

A lack of mutual respect can erode all trust. Professionals can easily start a venture without trust, but a lack of trust is not sustainable.

Remember to have integrity.

Barcott learned the importance of doing the right thing even when no one is looking during his time in the military.

He recalled a time when a drill sergeant asked his group who had used the bathroom without flushing. Someone in the group admitted to the mistake and had to stand for the entire night. However, on another occasion, a different officer candidate made another minor offense, but did not admit to it. That individual violated his integrity and was kicked out of officer candidate school and lost his two-year scholarship to college.

In the business world, Barcott acknowledges there are challenges with many gray areas. He advises to do the right thing and surround yourself with business partners who will keep you honest.

“Your integrity is the one of the few things in this world that you control,” he says.