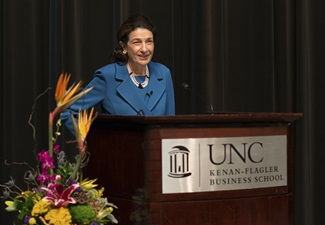 Olympia Snowe, former U.S. Senator and member of the U.S. House of Representatives from Maine, answered that question when she gave the annual Weatherspoon Lecture on Feb. 2.

“Congress is at a tipping point with respect to its ability to govern and to legislate,” Snowe said. “The American people understand that intuitively.”

The inability and unwillingness of Congress to collaborate is a critical problem that needs to be remedied for sake of the nation’s future, she said. “For those of you who are today students, and tomorrow leaders, I urge you to embrace a course of consensus and compromise and conciliation because in forging real solutions, you have to take the risk of working with each other instead of against each other.”

Students at UNC Kenan-Flagler certainly understand the value of compromise as part of a school that emphasizes and fosters collaboration with core values, which Snowe recited: excellence, leadership, integrity, community and teamwork.

Congress is more concerned with messaging than legislating, she said. As a result, governing never begins and campaigning never ends.

After serving in public office for 40 years, Snowe decided to fight for bipartisanship outside of Congress and use her insider experience and knowledge to give a voice to Americans who also feel the governing and legislative process has gone awry.

“When we minimize the political barriers, we maximize the potential of Congress,” she said.

Snowe definitely understands maximizing potential. Orphaned at 9, she has demonstrated her ability to make a positive out of a negative throughout her life. “It was from those early hardships and childhood experiences that I developed a passion for wanting to serve others and be engaged in the world around me,” Snowe said.

That passion and resilient spirit took her to serve in both chambers of her state’s legislature and both chambers of Congress. She became known for bipartisanship – which caused headaches for some of her party members – and didn’t let political lines get in the way of serving her constituents or her country to the best of her ability.

Chancellor Carol Folt introduced Olympia Snowe as a fighter who relishes a good debate – and Snowe assured the audience that this was true.

A myriad of reasons contribute to the polarization and dysfunction of Congress, but Snowe believes three issues catapulted the legislative body to its current state.

“The healthcare bill, the stimulus, along with the demographic changes that were occurring in the political landscape, all converge in what I consider to be a perfect storm that resulted in the polarization that we are experiencing today,” Snowe said.

Both sides of Congress have virtually abandoned policy making. The way members of Congress dealt with issues of the past separates it from the present. They recognized there were differences of opinion and debated them, but they understood they could transcend them, Snowe said.

Snowe is a member of the Bipartisan Policy Center in Washington. The organization has rolled out recommendations to forge common ground between the two political parties. Among many other recommendations, they emphasize a five-day work week so that congressmen and congresswomen can focus on issues, build consensus and understand the complexity of the issues being debated.

Problems cannot be solved unless everyone’s perspective is understood, she said. Engaging in the political process gives the American electorate the power to effect change and make Washington work again.

Use the information accessible through social media and technology to engage, she advised. “Silence is not golden in our political system today because otherwise, we are allowing the small, fractious minority to govern the direction of the future – not only of campaigns, but of governance in our political system.”