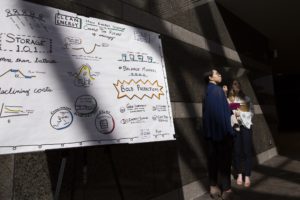 “New Paradigms in Intelligent Transportation” was a fascinating panel at the 2018 UNC Clean Tech Summit. It explored the potential impact of transitioning to driverless cars.

The panel included speakers from both the public and private sector. As an undergraduate preparing to enter the workforce and working in global operations, the intersection of technology and social impact is extremely important to me. This panel presented me with the chance to explore the societal benefits resulting from this technology and its potential challenges to widespread implementation.

“The benefits of autonomous cars will be far-reaching,” said Jeffrey Barghout, CEO of Robocist, Inc. More than 1,400 people die on North Carolina highways annually. Driverless cars could reduce the number of those fatalities – improving safety by eliminating human error. Not only does overall safety increase, but insurance premiums are likely to decrease with fewer chances of accidents occurring.

Barghout also posed this question: “What if you don’t have to go to the grocery store? A world where your car can act as a service instead of simply a vehicle that gets you from point A to point B.” This functionality will have immense effects on the mobility of seniors and individuals with accessibility issues. Barghout’s future also includes highways where several lanes are dedicated to autonomous automobiles. He believes that autonomous vehicles will encourage the dispersion of individuals, allowing more individuals to live farther away as commute times will have decreased.

Even with its many advantages, some critics doubt the feasibility of driverless cars in the short-term. The first area of skepticism is regulation. Right now policies and laws are trailing the technological advancements.

Before driverless cars can become a reality on the road, open communication between private companies and the government needs to exist. Partnerships between the two must be established before creating any sort of infrastructure that helps with control, liability issues and implementation of autonomous.

Issues of liability and ownership are at the forefront of the conversation. Driverless cars blur the lines of responsibility because perhaps they will no longer be owned by drivers but shared or leased. Who will be liable if accidents do occur? Drivers? Auto-manufacturers? Entire car companies or just engineers who performed testing? There are many questions left unanswered, but I am confident that we will soon find their answers.

Regardless of your stance on the driverless car debate, similar emerging technologies are here to stay. To be competitive in the job market, students need to be aware of new technologies even if they are not be working with them directly. Companies are searching for well-rounded students who can understand the implications of new technologies and can navigate the growing changes.