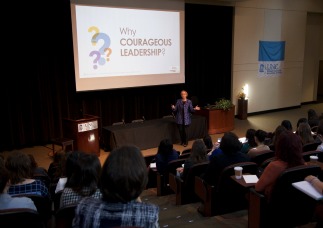 Courage is essential amid constant change.

“We have to figure out how to build a career, build a team and build companies that address a world that is changing rapidly,” says Cindy Solomon, an internationally recognized speaker, consultant, author and entrepreneur.

Solomon, who has worked with organizations including Google, Wells Fargo, The Mayo Clinic and The Ritz Carlton, delivered the morning keynote at the 2015 Carolina Women in Business Conference.

Solomon and her team have spent a decade conducting research on courageous leadership. What started as a business research project transformed into an in-depth examination of how courage differs for men and women in business. Solomon’s data came from interviews of individuals of all ages and all walks of life.

“It was nothing like what we expected,” she says.

What comes naturally to one person can be a challenge for another. “That’s why it is very hard to talk to someone in and out of their courage – or, inversely, in or out of their fear,” says Solomon.

Public speaking is a perfect example. Speaking in front of large audiences – such as a packed Koury Auditorium – comes easily for Solomon. But for others, it’s not so easy.

Having courage is commonly mistaken as having no fear. But Solomon defines courage as taking action in spite of your fear. It’s the difference between freezing up and standing up.

We think we aren’t courageous

One hundred percent of us are courageous – but only 33 percent of women believe they are.

“Culturally, women are taught that we aren’t courageous – and if you are, don’t tell anybody,” says Solomon.

Men and women look at their potential differently, which plays out in the workplace. On average, women will only apply to a job posting that lists 10 qualifications if they meet seven of them. In contrast, Solomon’s research found that men will apply if they meet three of the 10 qualifications. This means that fewer women are applying for jobs and getting hired.

“Until we give ourselves credit for being courageous, we can never build it as a skill,” says Solomon.

Courage can be learned

Developing courage is like building a muscle – the key is acknowledging progress. Too often, women spend time focusing on the negatives.

“You cannot learn any new skill unless you give yourself credit for the effort you’re making against it,” says Solomon.

Courage is different for men and women

“That tells us how hard wired all of this is in us,” she says.

Women have a tendency to disappear in a workplace setting. To combat this, women must be clear about their strengths, advocate for themselves and stop giving away credit.

Solomon encourages women to practice introducing themselves using their official titles and to articulate their strengths. It might be uncomfortable at first – but that’s the point.

“Until we are crystal clear about what our true strengths are, we can never be used as the asset we are to an organization,” she says.

Solomon delivered the morning keynote at the 2015 Carolina Women in Business (CWIB) Conference at UNC Kenan-Flagler. The annual event is organized by CWIB, a student organization that provides the women of UNC Kenan-Flagler with opportunities for career and community development and networking opportunities in preparation for their post-business school journeys.