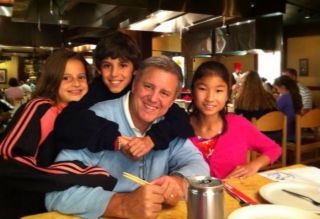 A few years ago, Chip Snively’s son asked him when he was going to get a regular job like other dads.

Snively is a senior lecturer of finance. Because he has the opportunity to work from home when teaching in the online MBA@UNC Program, Snively has lots of time to participate in the lives of his three kids.

“We’re getting close to the time when they will say, ‘Dad has too much time for us,’” says Snively.

In 2002 the family man took a sabbatical from his job with Intel Corp. when he and his wife adopted a daughter and had their son. “It’s been so much fun. I really never thought of parenting as a job,” he says.

Snively spent 14 years in the corporate world after he earned his MBA from Indiana University. He worked as a controller and strategic planner in global manufacturing for Intel Corporation, with postings in Puerto Rico, China and Malaysia.

While at Intel, he became well-known for training and developing employees and was sent to Malaysia and China to cultivate junior staff. “When I got the opportunity to teach, I found it to be an extension of mentoring on the job,” he says.

In 2004, Snively began teaching at Indiana’s online business school, Kelley Direct Online. The experience made him an excellent choice when UNC was launching MBA@UNC in 2011 and searching for new faculty.

Snively has witnessed firsthand the dramatic changes in this new form of education.

More schools are launching online programs today, and Snively is among those who are certain that teaching online has a bright future. 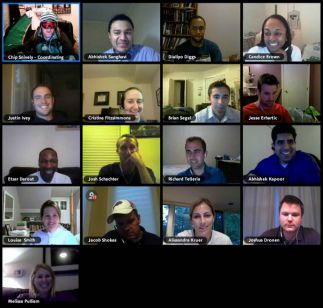 “Many students cannot leave their jobs for an on-campus MBA program,” he says. “Also, schools have to find other ways to economically get education to students. You can’t keep building buildings.”

Snively is deeply involved with on-campus students, too. He coordinates the Investments Emphasis in the Undergraduate Business Program and Capital Markets and Investments Concentration in the full-time MBA Program.

He teaches core finance courses in the Undergraduate Business Program, which means he teaches almost every undergraduate student. He runs the Applied Investment Management (AIM) course associated with student-managed funds, which includes undergraduate and MBA students.

Snively also oversees a course of 60 to 90 undergraduate students as they set goals for their summer internships, write reports and share their experiences. He teaches a personal finance class for graduating seniors in which he reveals “the expense of auto insurance, how little students will earn after taxes, and scares them in the hopes of making them smarter about money.”

As an advisor to the UNC Finance Society, he and David Vogel, director of career development and employer relations for the Undergraduate Business Program, organize an annual trip to New York to connect students with investment firms. For many students, the trek is their first opportunity to learn the art and value of networking in the competitive field of finance.

Snively is a true teacher. He sees his job as helping students realize their greatest potential. In his voice, you hear the excitement and satisfaction he gets from his student’s success – such as when he tells the story of the former student who had been the first in his family to go to college and had a successful corporate career but wanted to teach. He got an opportunity to do so when Snively hired him to teach in MBA@UNC.

Snively likes helping others connect with their calling.

“Someone once told me I was LinkedIn before there was LinkedIn,” he says with a laugh. “Every job I’ve had was because of some seed I planted years before. I’ve had a lot of help from a lot of very caring people and mentors, and it feels good to pay it forward.”

Indeed, his network was responsible for luring him to Chapel Hill. When Snively was at Indiana, Clay Whybark – a now-retired UNC Kenan-Flagler operations professor – was one of his professors and Paul Friga (MBA ’96, PhD ’03) was a colleague. Both told Snively that the work at UNC would excite him– “and that the basketball was a little better!” 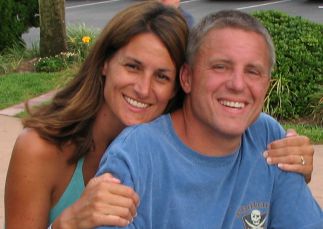 While he was in discussions to finalize his offer with UNC Kenan-Flagler, the School’s finance chair mentioned the need for an accounting professor for MBA@UNC, which was set to launch in July 2011. Snively mentioned his wife, Tanja Snively, was a CPA who previously worked as a professor at a community college and was looking for a job. Shortly afterward, Tanja was hired and headed to North Carolina for training ahead of her husband.

While the move and transition were seemingly perfect, three months after their arrival in North Carolina, Tanja was diagnosed with breast cancer. She underwent surgery and six months of chemotherapy. Snively believes fate brought them to UNC, where Tanja could benefit from its world-class health care services.

“She never missed a class or a day of work,” Snively says proudly. He credits the School’s finance and accounting departments with helping the family through a very difficult time.

Tanja now also teaches in the Master of Accounting Program, from which she graduated in 2015.

Snively has had a major impact at UNC Kenan-Flagler. In only his second year here, he won the prestigious Weatherspoon Award for Excellence in Undergraduate Business teaching.

“Chip is an excellent professor and mentor,” wrote one of his MBA students. “His real-world and academic experiences provide a perfect applicable blend for students. He is clearly committed as an educator and motivates students significantly.” Another MBA@UNC student praises his “great class sessions, fluid discussion” and notes that he was “fun and engaging (he even dressed up as a mountain climber for a simulation!).”

UNC student athletes have recognized Snively for his willingness to mentor them. In 2014, lacrosse player Frankie Kelly (BSBA 14, MAC ’15) and fencer Dan Giles (BSBA ’14) invited Snively to be their guest at the awards banquet for the top 10 student athletes. He was the only teacher invited by two students. Four of the top 10 student athletes – Loren Shealy (BSBA’ 15) in field hockey, baseball player and Tampa Bay Rays draft pick Benton Moss (BSBA ’15), golfer Robert Register (BSBA ’15) and soccer player Jonathan Campbell (BSBA ’16) – invited him to be their guest at the 2015 event. 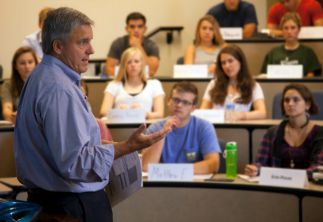 Tyler Zeller (BSBA ’12) – a four-time Academic All-ACC selection and who plays for the Boston Celtics – is an Indiana native who Snively was involved in recruiting (unsuccessfully) to Indiana while he was on the faculty there. Zeller’s family knew Snively well because he had refereed high school basketball in their home state, where Tyler and his brothers are basketball legends. Now, Snively sits on the board of the Zeller family’s nonprofit organization DistinXion, dedicated to integrating character and sports training to help build family values and relationships.

Everyone is charmed by Snively, the perpetual educator – a title that’s fine by him.

“Like parenting, I’ve never really thought of teaching as a job. I’m humbled and honored to have the opportunity to interact with the incredibly bright minds of our students at UNC Kenan-Flagler. Moving from the corporate world to academia was the best move I could have made,” he says, “I’ve died and gone to heaven here.”

Today, the family is completely assimilated to Chapel Hill.

“We’re all Tar Heel Blue here,” Snively says, despite admitting – in a near whisper – that the family still roots for the Hoosiers when they play UNC. “We’re fully embedded.”

“Chip has contributed enormously to the success of our students in the finance program – and clearly he has had an influence beyond the classroom for many,” says Jennifer Conrad, senior associate dean for academic affairs and Dalton McMichael Distinguished Professor of Finance. “We are lucky and grateful to have him here – in our MBA@UNC program, in our Undergraduate program, in our full-time MBA Program and in our UNC Kenan-Flagler family.”