Charting a new course in the civilian world 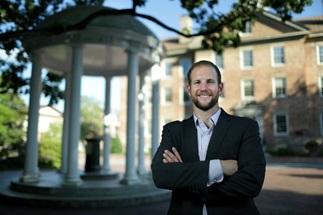 After serving as a U.S. Naval officer for seven years, Adam Kaeli (MBA ’14) was ready to chart a new course in the civilian world. Armed with solid leadership skills and experience – and a little help from UNC Kenan-Flagler – Kaeli successfully navigated the transition from the military to the civilian workforce and landed a senior consultant role at Deloitte. Here’s how he did it, in his own words.

I joined the Navy because I had a desire to serve. I enjoyed my experience immensely. My wife also served, and we both transitioned out of the service around the same time. Our decision to leave the military was a work/life balance issue. There was a three-year period where we were apart for 18 months. We started thinking about family and the future and decided we wanted to put down some roots and pursue some things that didn’t necessarily fit with the military lifestyle.

Coming from the military, I didn’t know a ton about what’s out there in terms of career opportunities in the private sector. As I started looking around, I realized that I had a lot of the leadership and soft skills which are very valuable to companies. Leading a division of 25-30 people is similar to leading a team of 25 people within a company. I served on a guided missile destroyer for five years. The skills that supported that – time, project and program management – translate really well to the civilian world. In the military, we do those things day in and day out but take them for granted because they support whatever direct contribution we’re making to our unit. Being able to explain that narrative is part of the challenge to making the transition.

To leverage the leadership skills I developed in the Navy and land a comparable position, I needed some formal education. I lacked some of the business acumen that my peers in the private sector had, and I also needed to understand the way firms operate outside of the military. The best way to achieve that was to pursue an MBA.

I was on active duty throughout the two years I was enrolled in MBA@UNC but moved into a teaching position, which afforded me the bandwidth to earn my degree. During the day, I taught naval operations and navigation at The Citadel. In the evening, I worked towards my MBA. It was the first time in my life where I had two significant commitments that complemented each other.

From the military to consulting

Towards the end of my first year in business school, I developed an interest in consulting. It seemed like a good fit for a few reasons. From a geographic perspective, you can live anywhere. My wife is from Denver and we had a really strong desire to get back there to be near family.

The other reason was that consulting would allow me to make a long and lasting impact in a short period of time. That really resonated with me. During my time in the Navy, I discovered that I have a passion for process improvement – for leaving organizations a little bit better than I found them. So consulting was a good fit.

The importance of relationships

The biggest surprise of my experience was the importance of your personal network. Every day I realize that it is absolutely about who you know.

Think of it this way: the skills you have are table stakes. They’re necessary but not sufficient to land a lot of roles. At the end of the day, you’re competing with people that have similar skill sets and capabilities. You need to stand out from them as much as possible. Using your network to connect and build relationships with the people you need to know increases your chances of being considered for a position. The hiring manager or the person on the other side of the table wants to mitigate risk as much as they can. If someone in their firm already knows and trusts you, that helps mitigate the risk.

My advice for anyone making a transition is to cultivate your network early on. As a student, I co-founded the MBA@UNC Consulting Club, which quickly grew to more than 100 people. It created an easy and effective way for students interested in consulting to connect and share information, compare contacts at different firms, prep for case interviews and help each other through the transition from whatever industry we came from.

The UNC Kenan-Flagler network is wonderful. I can go anywhere in the country and find someone who went to Carolina to grab a coffee or a beer with. I know if I need to reach out to someone — whether it’s making a career move years down the line or starting a nonprofit — that network is there.

The biggest thing that drives me day-to-day is that I want to leave the world a better place and have some element of a legacy – something that will help others and go beyond the years that I live. That’s one of the reasons that I co-founded a nonprofit, Man Challenge. It’s an event series dedicated to helping men become the strongest, most responsible leaders and role models they can be. The proceeds from each event go to the Fisher House Foundation, an organization which provides a network of comfort homes where military and veterans’ families can stay at no cost while receiving treatment.

The true legacy we leave behind is the relationships we have – with our family and others – and the lives we impact. When I’m 80, I want to think back and be proud of all the things that I’ve done.