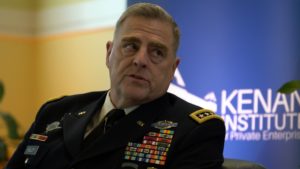 “We’re in a unique and transformative time in global history,” said General Mark A. Milley, chief of staff of the U.S. Army, speaking at UNC Kenan-Flagler Business School.

As part of the Dean’s Speaker Series, Milley shared his insights on issues ranging from the changing geopolitical landscape to the military’s apolitical nature.

Change – in the character of war, in the structure of the Army and in the global economy – was a recurring theme of Milley’s talk.

“We’re witnessing a global event that only happens once every couple hundred years,” said Milley, “which is the massive global shift in economic weight and power from a North Atlantic-centered global economy to a North Pacific-based global economy.”

China is the main reason for the current shift, and when historians look back on this century, he said, the relationship between the U.S. and China will be the central theme.

But the geopolitical landscape isn’t the only aspect of international relations that is changing. The world is in the midst of changes to the fundamental character of global armed conflict as well.

The sheer amount of observation technology surrounding us at any given time allows the military or anyone with access to collect and utilize information better and faster than ever before, especially with new implementations of robotics and artificial intelligence.

These changes raise major concerns for Milley, who has studied how technological advancements have affected past wars. “Whichever side connects those dots and applies these technologies most effectively and organizes themselves correctly will have a significant advantage in the conduct of warfare,” he said.

Milley’s goal is for the U.S. to be the side that connects the dots, but the military will need to make large investments in research and equipment for that to happen. After the 2001 terrorist attacks, the Army was restructured, shifting money from its research and development departments to current operations. Now the military is at a turning point, needing to recapitalize and restructure to deal more effectively with the changing nature of warfare.

Part of process the military needs to undergo is to alter its culture. According to Milley, the Army has a hierarchical, industrial-age structure and needs to update its operations to fit the current climate.

Changing the culture in an organization as large as the Army will be challenging, and dependent on leadership, he said. “People like me are from a past age, so I’m smart enough to realize that there is change, and I’m convinced enough to know that we need to propel that change. I’m not technically savvy enough to understand exactly what that change needs to be, so what I need to do is unleash the inherent powers of the younger generation.”

To accomplish a culture change, Milley has been trying to shatter the stereotype that the military has little regard for independent thinking. He wants to ensure that the Amy is a safe place for people to grow and learn, and he hopes to break down some of the barriers its strict hierarchical structure has created over the years.

“The world is changing,” said Milley, “so we need to change with it.”