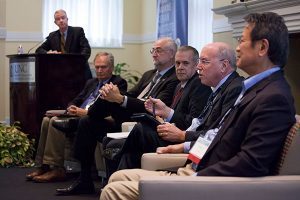 Aligning private-sector incentives with the public good holds the key to effective policymaking – but it first requires understanding the economic roots of political polarization.

“One of the largest problems facing the nation right now is massive economic disparity,” says Uli Bennewitz, founder and president of Weeping Radish Brewery and AgResource in eastern North Carolina. “There is serious conflict in rural America, and these Americans aren’t seeing the same vitality that’s seen in our urban areas.”

Bennewitz and other business executives identified the most important and feasible policy changes the new presidential administration can make to promote U.S. economic growth at the Frank Hawkins Kenan Institute of Private Enterprise’s “What’s Next, America?” conference.

Embracing all of America

“If you drive through eastern North Carolina, the need for the revitalization of these rural areas is visible,” Bennewitz says, noting that the region’s economic recovery has been slower and weaker when compared to the rest of the state.

“America needs to be balanced out economically,” Bennewitz suggests. “Technology can do it, value-added can do it, and training our people with the necessary skill sets can do it.”

“We had this notion of the ‘Inner Banks,’ a name to celebrate the region’s vibrant natural resources with all its rivers, banks and streams while ultimately branding our natural assets,” Pope says. Promoting the region’s unique vitality helps bring people and businesses back while keeping them from pursuing opportunities elsewhere in the first place.

The panelists agree that the problem boils down to education.

“There’s a cultural bias here in America,” says Oscar Wong, the owner and founder of Highland Brewing Company in Asheville, North Carolina. “We think that if you don’t go to a university, you’ll have less of an opportunity to succeed.”

He says America needs to shed this cultural bias to help promote post-secondary education while not detracting from educational opportunities that fall outside the umbrella of a four-year university degree – community college, trade school and craft education, as examples.

“We have education on a university level in America, but we dropped the ball on the rest of it,” Bennewitz adds. “We need to think about the 65 percent of youth who don’t go to universities and colleges. What do we do for them, and how do we give them all a chance to succeed in life?”

Starting with a proactive leadership approach

“Medicine is at the peak of intellectual sophistication,” Pike says. “But at the same time, our healthcare policy is nearly in gridlock and on a national basis we’re just not getting it done.”

Productivity in the healthcare industry has been strained in the past few decades, with costs increasing along the way. A recent study by the Commonwealth Foundation found 27 percent of U.S. respondents believe our health care system should be completely rebuilt. The country with the next highest percentage of respondents who believe the same was Norway, at 12 percent.

At the same time, Pike says the private sector must chase the diamonds in the rough, with technological innovation being one. Pike says speeding up research and development stages in medicine with newly acquired technology could help lower the industry’s unsustainably increasing costs.

“In Korea, people realize that manufacturing is slowing down, so the nation has enacted national economic policies encouraging innovative medicine developments,” Pike says. “This allows Korea to bring to market innovative medicines more quickly, while simultaneously lowering their costs, lowering the costs of healthcare and building a healthier nation.”

“Too much of the policy set by government isn’t responsive to change – until crisis strikes and highlights the problem,” Holden says. “With effective leadership that’s proactive, citizens can come together, solve problems and enact effective policies.”