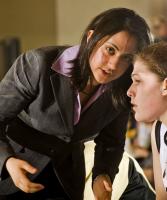 Nora Jabbour (BSBA ’06, MBA ’14) isn’t your typical MBA student. Basketball played a major role in her life, first as a player and then as a coach.

When Jabbour graduates, she’ll apply what she learned on the court to her new role at Goldman Sachs as a private wealth advisor in Philadelphia.

At Goldman Sachs, she will advise high net-worth clients, nonprofits and institutions on wealth management, investment advice and financial planning. “The job connected my two passions: people and advising,” she said. “The key to winning is teamwork,” she said. “You’re only as good as the people you have around you, and how well you motivate them.”

Jabbour graduated from UNC in three years, and joined the Washington Wizards as a marketing assistant.

She realized she wasn’t yet ready for a desk job, so she went back into women’s basketball. She managed and coached women’s basketball for five years as an assistant coach at the U.S. Military Academy, Emory University and Appalachian State University.

“I always loved the interaction between coaches and players,” she said, but she decided to leave coaching and returned to UNC Kenan-Flagler in 2012 to study marketing. “Coaching is really a blast,” she said. “But at the end of the day, it is a career path with high turnover. It was a job that was going to require a number of geographical moves and keep me away from my family.”

Soon after starting her MBA, Jabbour realized that she wanted a career that involved more direct client interaction than marketing roles typically enabled. She changed her focus to investment management.

Her experience at UNC Kenan-Flagler has been “like hanging out with 300 of my best friends every day.” And she’s been challenged, pushed her own boundaries and taken on new experiences.

She praises the diversity of her classmates – about 30 percent of UNC Kenan-Flagler MBA students are international – and the accessibility of her professors.

Last year, she was elected as a Legacy Rep, one of eight first-year student representatives for the MBA Program. In the leadership role she advocates for her classmates as part of the student government.

She took a study course to India and Dubai – her second time outside the United States – with the UNC Kenan-Flagler Global Immersion Elective last spring. And in January, she headed to Barcelona, Spain, as part of an exchange program with ESADE Business School.

“Why not go?” she said. “Opportunities to study and travel abroad at world-class partner MBA programs don’t come around every day. This experience will put my studies here at Kenan-Flagler in perspective with the global scale of business.”