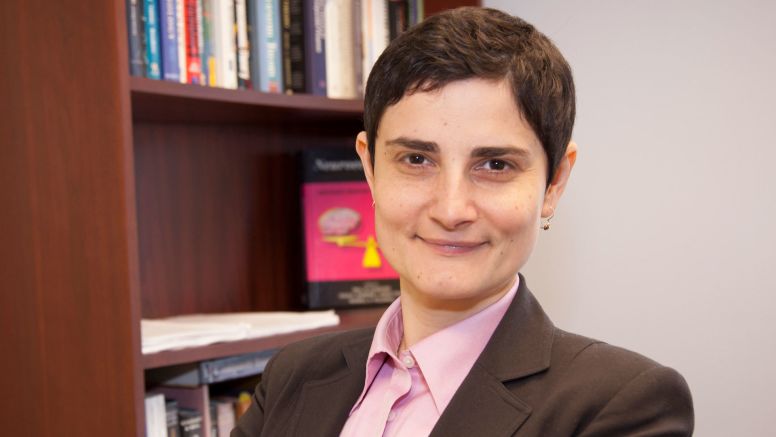 Camelia Kuhnen arrived in Boston from Romania in 1997. She was an 18-year-old aspiring doctor with two suitcases and a scholarship to MIT.

America was not quite what she expected. “I was very curious to see that America did not look like it does in the movies. Boston is very different from Dallas – and I say Dallas because the TV show ‘Dallas’ was super popular in Eastern Europe after the communist regime fell. So we all assumed that America was just like Dallas,” she says.

Another expectation changed almost two years into her pre-med studies in brain and cognitive science – Kuhnen learned she couldn’t pursue her dream of practicing medicine. As an international student, she couldn’t get a medical school loan without an American co-signer. “I didn’t have that opportunity, so I had to come up with plan B,” Kuhnen says.

Plan B was to double major in finance. Wall Street was hot in 1999, and she was told she could get a great job as a trader. As she began her finance studies and continued learning about brain and cognitive sciences, she started making connections between her two disciplines.

“I realized that finance is about numbers that come from the decisions of people,” Kuhnen says. “And when people make decisions, neuroscience – and brain and cognitive science, in general – provides pretty useful insights.”

She realized there might be a way to combine the two fields and found a mentor in MIT finance professor Andrew Lo, who was studying connections between psychology, neuroscience and trading. Kuhnen worked as his research assistant and started to think about how psychological and neurological factors affect traders.

After receiving bachelor’s degrees in both finance and neuroscience she went to Wall Street as an intern for Merrill Lynch, where she confirmed two things. First, while mathematical models can find the optimal portfolio, many decisions made on Wall Street – as her research indicated – are based on emotions and impulses.

Second, she found she did not enjoy life as a trader. “I realized I didn’t have the right personality for that job,” she says. “I really enjoy having time to think very thoroughly about specific topics. In sales and trading, you have to make very quick decisions and go with your gut many times.”

Fortunately, that same year, she was accepted into the finance PhD program at Stanford, where she continued her research in the newly created field of neuroeconomics.

As its name indicates, neuroeconomics is the intersection of neuroscience and economics. Kuhnen collaborated with a neuroscientist at Stanford to produce some of the field’s founding research. 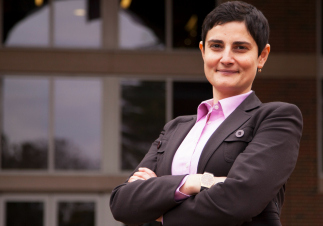 “I got into this field at the right time and I am lucky to have the right background with training in both neuroscience and finance,” she says. “I have been part of the birth and creation of a whole research field, which is really cool.”

After she earned her PhD, she joined the Northwestern faculty, where she spent several years before UNC Kenan-Flagler recruited her to Chapel Hill.

A white board in Kuhnen’s office lists the names of the UNC business professors she is collaborating with, along with those of Duke neuroscience and finance experts.

Also on that list are UNC neuroscientists Kelly Giovanello and Charlotte Bottiger, with whom she is studying the role of economic adversity on decision making. They hypothesize that socioeconomic factors change the brain’s perception of risk and reward, which in turn leads to differences in people’s cognitive performance along many dimensions, including in the context of financial decision making. This project follows up on Kuhnen’s work on the process by which people learn from financial outcomes.

“The data that I have indicates that experiencing more economic adversity induces people to be overly pessimistic about what is available to them and what they can achieve,” she says.

This body of work has important implications on both micro and macro levels. First, it helps economists better understand individual financial decision making. In the grander scheme, it helps explain why income equality is so difficult to overcome, since those who grew up in poverty will be less likely to invest in their future through financial instruments and education.

“If people who face adversity have these incorrect and pessimistic views of the world and what’s available to them, they will remain at the bottom of the socioeconomic ladder and this, in turn, will ensure that income and wealth inequality persist,” Kuhnen says.

It also signals that recessions often last longer than they should because many people are hit with negative financial shocks simultaneously and as a result become overly pessimistic about what they can achieve by investing in new ideas, new businesses, or in their own human capital.

In addition to her neuroeconomics studies, Kuhnen conducts “more standard finance research,” such as analyzing individual decision making within the context of firms. She has tackled research questions about the best way to motivate employees, how firms should approach hiring and how to best measure performance.

“So really, if anything, I can say I study people,” Kuhnen says. “I’m extremely interested in individuals and how they behave in markets and firms. In that sense, I’m not your standard finance academic.”

“I work on very new topics and use methods that are different than the majority in finance,” Kuhnen says. “The faculty here are happy to collaborate across departments, which is an unusual thing. I think it’s the same for UNC in general. ”

Collaboration across disciplines leads to important results. “At UNC, it’s easy to talk to people apart from your niche. Interesting work – not just pure research, but also work with practical applications – happens at the intersection of fields,” she says.

Kuhnen serves on a new pan-university task force focused on understanding and alleviating poverty across the state. The community-focused effort directly relates to her research on financial decision making in adverse economic conditions.

“It is an effort that I am passionate about and I am very optimistic that we can do something really good for the people of North Carolina,” she says. “I believe in the mission of the University and that it will continue to be a world-class institution with very deep local roots. It has a huge, positive impact on the state. That’s why I’m excited to be here.” 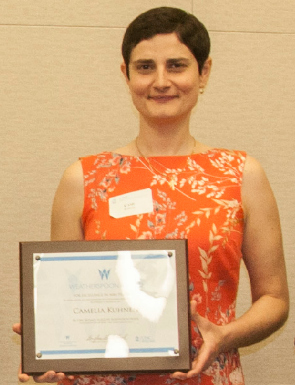 In addition to interdisciplinary collaboration, Kuhnen genuinely enjoys teaching – and it shows. She received the 2015 Weatherspoon Award for excellence in teaching in the full-time MBA Program and was named to Poets & Quants’ “Best 40-Under-40 Professors” in 2016.

Kuhnen made “an introductory course interesting to a long-time professional student while, at the same time, connecting with students who hadn’t encountered even the most basic concepts until enrolling in business school,” according to one student nomination. Another student wrote: “Never in all of my time as a student including high school, undergrad and now graduate school – have I seen someone so dedicated to ensuring that students not only comprehend, but master the subject matter.”

“I have had a great experience teaching these students,” Kuhnen says. “They are smart, they work hard and they have the right attitude in the classroom. They are intellectually curious, and there is very constructive dialogue in the classroom.”

When she is not teaching or in the lab, Kuhnen is outside with her family enjoying all North Carolina has to offer.

“We go hiking or biking pretty much every weekend, either to the local state parks or more west. We have two cars and the license plates are ‘Go Hike’ and ‘Go Bike.’ I see why Chapel Hill is the Southern part of heaven.”

Listen to a North Carolina Public Radio interview with Kuhnen to learn more about her research and growing up in communist Romania.