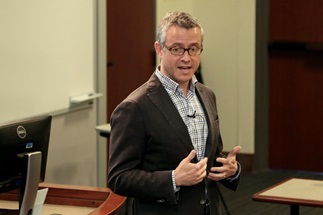 The Target effect: It’s a phenomenon that’s baffled our society for years.

You run in for one thing – just one! One hour and $100 later, you emerge wondering what the heck just happened. And since you probably forgot to pick up the one item you actually came for, you’ll have to stop in again tomorrow. But that’s okay, because who turns down a chance to go to Target?

How does Target do it?!

That’s the million – er, billion – dollar question for consumers and competitors alike. And while we may never know, we’ve got a feeling that chief marketing officer Jeff Jones has something to do with it.

Jones – recognized as one of the “World’s Most Influential CMOs” by Forbes – stands at the helm of marketing for the $72 billion company and is responsible for corporate communications and public relations, brand and category marketing, enterprise loyalty and all advertising, media and marketing operations. He is also responsible for the Guest Center of Excellence and serves as the architect for Target’s on-demand shopping experience.

UNC Kenan-Flagler’s Anthony Bowman (BSBA ’17) leveraged his network to connect with Jones. A few months later, he followed up with an invitation to speak at the School. As a world-class CMO, Jones receives numerous speaker requests – but Bowman’s persistence and follow-through brought him to Chapel Hill, where he spoke to more than 60 Carolina students at an event co-hosted by the Undergraduate Business and MBA marketing clubs.

On a typical day, Jones tackles a diverse array of topics ranging from grocery to Gwen Stefani. And because the brand has built a following of dedicated and passionate customers, much of his job is focused on understanding what makes them love Target so much.

“One of the things I’ve learned in this role is about the power of brand, where people refer to the relationship they have with the brand as their own,” he says.

But like any other relationship, it’s a two-way street and hasn’t been without its ups and downs. At one point, the company lost sight of its customers and the real-world factors affecting them.

“We became too internally focused and did not offer enough diversity,” says Jones, who candidly shared his reflections and lessons learned from some of the brand’s missteps. “We didn’t pay attention to what was going on.” 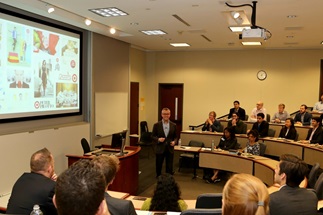 The company regained its focus by adopting an externally focused mindset and zeroing-in on customers. At Target Guest Central, team members monitor social media to keep a pulse on what people are saying. But they don’t just listen, they join in the conversation – and that’s especially important because consumers are increasingly demanding authenticity from brands.

Target strives to build loyalty and community around the brand in compelling ways. The company invests in the communities it serves, donating five percent of its net profit to local charities each week. It’s also upped the ante by putting an innovative spin on the retail market.

Target has made its mark through collaborations with fashion designers like Lilly Pulitzer and Marimekko and recording artists like Adele and Taylor Swift, which offer customers access to exclusive collections and album releases. Its Cartwheel savings app is one of the most downloaded apps in the Apple App Store, and the company hopes to build on that success with the launch of RedPerks, its new app-based loyalty program. And in February 2016, Target partnered with Stefani to produce the world’s first live music video ad, which aired during the Grammys.

It’s up to Jones and his team to tell these stories and bring the brand into the lives of millions. The digital landscape presents marketers with exciting new ways to connect with consumers – but it also brings its fair share of challenges. Working in an increasingly digital world requires marketers to have more and more analytical skills, says Jones. At the same time, the shift to digital is still very much a work in progress – meaning that traditional media is still a big player. Case in point: 40 million people still get the Sunday circular each week.

Ultimately, many fundamentals of marketing have stayed the same, says Jones. Good marketers still need to focus on the consumer, be able to correctly identify and define a problem, and strategize and prioritize for the short and long term.

“Our job as marketers is to drive traffic, deepen engagement and strengthen love for the brand,” he says.

And of course, it helps to be passionate about what you’re marketing – which is why he wears a little bit of red every day.