Building our community with a meat smoker 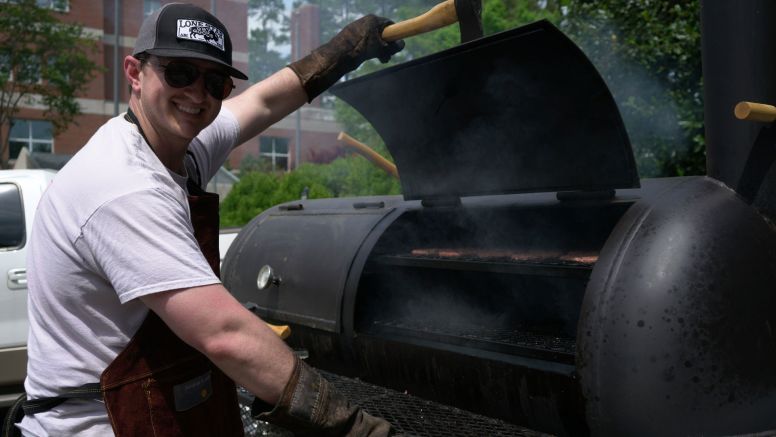 I don’t really remember meeting Nelson Ingram. It just feels like he has always been part of my experience at UNC Kenan-Flagler.

I hardly feel alone in that description, since literally every MBA student on campus knows who he is. His reach within the School extends beyond his roles (social chair for the student body), beyond his pre-school life (Head Yell Leader at Texas A&M) and even beyond what he’s done for the School (implementing a weekly community event). Everyone knows him because he’s always around, always smiling and always helping build a better community.

With that said, if you ask anyone what Nelson’s defining characteristic is, they’ll tell you the same thing: The man smokes meat like an expert. A greatest hits record includes brisket for the Jewish Business Association Seder, turkeys for international students to take for Thanksgiving, and pulled pork for the year’s first Carolina Casual, a weekly event for students, staff and faculty.

His specialty is certainly beef, as he is from Texas, but he can do it all. Nelson read Aaron Franklin’s “Franklin Barbecue: A Meat-Smoking Manifesto” at his in-laws a few years ago, and he felt so inspired that he got his own smoker. He and his dad brought that smoker from Texas to North Carolina when he started school, and the rest is UNC Kenan-Flagler history.

While there are likely individuals making food for their classmates at many business schools in the country, what makes Nelson special is his dedication to his craft and to his community. He doesn’t charge anyone for anything but materials, never taking a profit on what could be a great side hustle while in school.

Instead, he donates his time and the use of his smoker to whoever asks him, including but not limited to: the MBA Student Association, Kenan Connection, Christians@Kenan-Flagler, Jewish Business Association, Veterans Association and more. He spends tremendous amounts of his free time making sure that his classmates get the best experience when they bite into one of his delicious pieces of brisket.

More importantly than the quality of food, though, is the importance it holds to Nelson. He doesn’t just do it because it’s fun, although he loves doing it. He does it because he cares about UNC and the community here, and he wants to give back, build on that community, and give everyone shared experiences.

It’s no surprise that Nelson won the Community Core Value award, nominated by his classmates as the “second year who best exhibits the core value of Community.” Through his passion for food and love of Carolina, he’s introduced another layer to our community in a way very few individuals have done, and to everyone who’s met him – that is to say, everyone at school – that’s no surprise.

As another classmate said, “They say that food brings people together in ways that very few things can, and during his time here, Nelson has brought people together over his BBQ.”