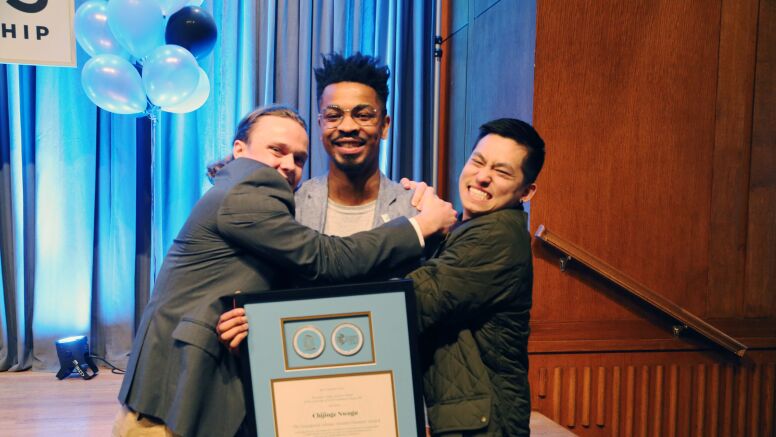 Chijioge “Chi” Nwogu (MBA ’18) is a builder. He’s fascinated with the transformation of ideas into fully-grown businesses.

To hit the reset button on his career and set out on the path to launch his own business, he came to UNC Kenan-Flagler Business School to earn his MBA. Today he is CEO of GameFlo, an independent gaming company that builds communities by empowering people on their own terms and to their own abilities.

Nigerian born and raised in the Bronx, Nwogu had his first taste of working at a startup as a college student. He got in at the ground floor as an intern at then-fledgling startup Bloomberg Sports. After he graduated from Brown University, he worked as an analyst at J.P. Morgan, and then returned to Bloomberg Sports as assistant CFO. 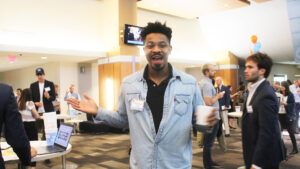 The time in a high-growth startup was an education. He witnessed dramatic growth and had a hand in how it was achieved and directed. He wanted to replicate the experience for himself, and needed a few more skills under his belt, so he decided to pursue an MBA at UNC Kenan-Flagler.

Nwogu knew even before he started classes in the Full-Time MBA program that he wanted to focus on three passions: leadership, sports and launching his own venture.

“I said to myself, if they don’t fall into one of these three buckets, I would not do it,” he says.

However, the 2016 U.S. election results brought doubt into his mind. As a Black man in America, he was vividly aware of the unrest around the U.S., and as someone who had lived in the Northeast all his life, he felt concerned about moving South at that time. Would it be better for him to defer so that he could focus on leadership in his community at home?

For some advice, he reached out to Sherry Wallace (BA ’82, MBA ’87), then director of MBA admissions and now executive director of engagement and inclusion at UNC Kenan-Flagler.

“Sherry told me, ‘Have that impact here – be that voice,’” he remembers. “‘You will be safe, and if you care about having an impact, you will at UNC.’”

Nwogu heeded her advice. He was energized by networking with his classes, and was elected captain of his Legacy, the groups into which students are split to foster community, and led his team to victory in the Legacy Cup for both years. A Consortium Fellow and Dean’s Fellow, his contributions to building an inclusive community at UNC Kenan-Flagler were recognized with the Core Value Award for Community at graduation.

Nwogu was that voice that Wallace urged him to be, and although this wasn’t always easy, he’s proud of the impact he had, and that he got to do it within such a loyal student community.

“I can call any of my classmates today and know that there’s mutual respect there, and that we’ll always find ways to talk even if we don’t agree,” he says.

“UNC alumni are very much devoted to trying to help people move forward – I felt empowered by that, and I still do.”

A conversation with a mentor inspired him to combine his experience in sports analytics with a social mission – the beginnings of GameFlo’s ethos – and he began to pursue the experience that would fill out gaps in his skillset. To build his skills in sports marketing, he interned at global sports agency Wasserman, helping increase the company’s footprint in women’s sports. 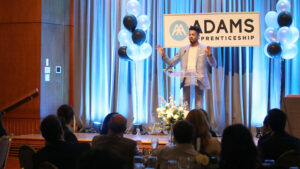 He took advantage of almost all of the Eship programs. He was an Adams Apprentice, and went on to receive the inaugural Adams Alumni Pioneer Award in March 2020.

He took his company through Launch while he was an MBA student, and then, in the spring of his second year, an intriguing opportunity arose.

A role opened up heading the Blue Innovation Community, and Nwogu was tapped to lead it. He did such a good job running the program that after two months, the Eship Center proposed he continue after graduation as entrepreneur in residence.

“It was really the right time, right place,” says Nwogu. “I was working on my venture, but as most people know, you don’t make money working on your venture from day one. I had the opportunity to stay plugged into the heart of UNC Kenan-Flagler’s entrepreneurial community, while also having the impact that I want to make within the community.

His impact has been massive. Nwogu is the Eship Center’s central point for student advising. He created the pipeline and a process and has mentored over 160 students. He also makes sure students get plugged in where they need to, including the Coaches Corner program which he helped launch.

He goes way above and beyond the normal coaching and pitch decks, having helped many undergraduate students navigate life decisions and figure out next steps in an uncertain world.

“I think my secret sauce is that I make things engaging,” he says. “I gamified just about all my workshops, to keep them interactive and hands on, which is something that students have reacted extremely well to.”

“Chi is a valued team member on the Eship Center team. He brings an energy and enthusiasm that are contagious and he inspires us to do hard work around DEI issues, in the right way, and to always make progress,” says Vickie Gibbs (MBA ’98), executive director of the center. 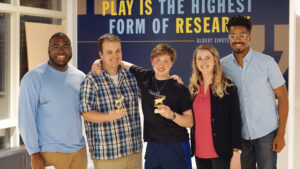 Nwogu co-led the first Scale Consulting project, an initiative for students to do hands-on projects with scaling startups. He also led coaching for an Eship Scholars program.

His startup, Gameflo, exposes young people to employable skills like pattern recognition and data visualization, while allowing them to explore the growing world of gaming.

“We have evolved to be a gaming company with a social mission to promote skill learning – it’s cool to take a lot of what customers want and need and apply that in real time to Gameflo,” he says.

Everything Nwogu has done at UNC has been done with purpose and an eye on the social impact. It’s a stunning trajectory that he forged with determination and creativity.

“UNC has given me a platform to really take my time, learn and apply things to my business, and having this Eship job has given me a financial base to launch my venture,” Nwogu says.

From the alumni contacts who have been his advisors, investors and board members, to the classes in game design and consultancy that he’s taken to prototype and grow his venture, Nwogu found the materials for his entrepreneurial ambitions at UNC Kenan-Flagler, and he recommends the experience to other builders.

“I believe that no matter what, I would have done this venture,” he says. “But I’m glad that they’ve let me build this here locally, and I’m proud that we’re a Chapel Hill-based company.”

Read more about Nwogu in Poets & Quants and on his blog, including reflections on his time as a student.