Skip to content Skip to Programs Navigation
Bootstrapping to billion-plus valuation: An inside look at the startup journey

Bootstrapping to billion-plus valuation: An inside look at the startup journey 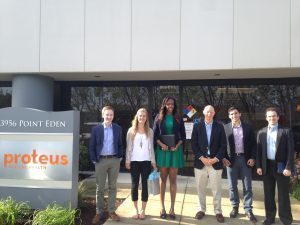 My first morning in San Francisco, I shared a Lyft with Tracy Baldwin, CEO of RokketMed, a startup working on transparent pricing for medical services. She was on her way to the airport, en route to a prospective client meeting in LA. I was on my way to meet up with the rest of the Adams Apprenticeship group at their hotel, which happened to be on the way to the airport. Before I had even finished my morning hot chocolate, I was talking startups with a complete stranger. What a welcome to San Francisco, the land of startups and where the future is made.

The next two days were a blur of constant introductions to the coolest people and most futuristic technologies I can imagine. We started at Proteus, a unicorn startup (translation: a company with a valuation of more than $1 billion) that makes edible microchips to help doctors, insurance companies and/or caregivers ensure patients are taking medications properly. The microchips carry no onboard power supply; rather, they react with stomach acid to generate electricity to send their signals.

We also visited Carbon 3D, co-founded by UNC professor Joseph DeSimone, who was awarded the country’s highest award for technology and innovation in 2016. The company makes 3D printers that transform vats of polymer goo into fully-finished products at speeds many times faster than other additive manufacturing processes. The technology is such a major breakthrough that no photography is allowed in the production area.

The parts and products Carbon 3D can make achieve levels of complexity that are impossible using traditional manufacturing techniques – and the variety is infinite. During our visit, we saw a prototype for a replacement hip joint printed to the exact physical dimensions of the patient’s original hip. Carbon 3D is already printing parts for auto manufacturers and will soon start printing a new line of shoes.

Getting galvanized in San Francisco

Perhaps my favorite visit of the trip was to Galvanize, an accelerator in downtown San Francisco that is part coding school, part co-working space, part placement service/talent source. I loved Galvanize because it gave us a look at the beginning of the startup journey. We had seen what startup success looked like at several other companies, but Galvanize offered a different view of the process – brilliant, incredibly dedicated people working tirelessly to turn their ideas into reality. Whether they were just starting out, or learning to write code to improve their career prospects, working alone in an office or with a team, or were on the verge of a breakthrough, it didn’t matter. Everyone was united by the fact that they were doing something with a purpose. Everyone was moving forward. Everyone was galvanized.

For 167 years, California has been considered the place for pioneers to be. Ever since the California Gold Rush in 1849, people have headed to the West Coast in search of fortune, leaving their old lives behind in pursuit of a dream. That pioneer spirit lives on in San Francisco. The gold has been mined, but people’s drive to strive, excel and succeed in achieving new and wonderful things remains in full force. It is an inspiring city. It has an energy and optimism I haven’t found anywhere else – a belief that the future is what we make of it, and we can make it great. I’ll be back!