Bill Rogers sees purpose at the center of SunTrust’s success 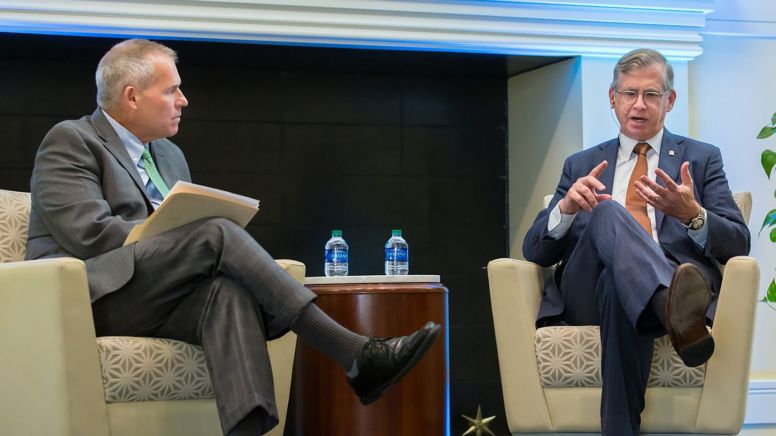 SunTrust Banks, Inc. and BB&T Corporation are merging to form the sixth-largest U.S. bank. Bill Rogers will serve as president and COO. He will become CEO in September 2021 and chairman in March 2022.

Learning how to keep learning is one of the greatest lessons SunTrust CEO Bill Rogers (BSBA ’80) has learned throughout his career.

Upon graduating from UNC in 1980, Rogers started his career at Trust Company, the predecessor to SunTrust Bank. He has held senior positions in corporate and commercial banking, corporate finance, retail banking, private wealth management and mortgage. He was named president in 2008, chief operating officer in 2010, and president and CEO in 2011. He was appointed as chairman and CEO in 2012.

As CEO of one of the largest financial service companies in the U.S., Rogers has led a significant transformation of the company, building upon its client-first culture. And it’s not just clients who benefit from the company’s purpose-driven culture.

“We give every teammate a day off, called a Day of Purpose to focus on their own financial wellness,” Rogers says. Employees also earn a $1,000 by completing the bank’s financial wellness program, Momentum onUp, to ensure they have an emergency savings fund.

Under his leadership, SunTrust has improved its adjusted tangible efficiency ratio from 72 percent to 61 percent, and more than doubled the return on average tangible common equity.

Although the Durham native had expected to pursue a career in business after college, he wasn’t quite sure what direction it would entail. In fact, Rogers didn’t imagine himself having a career in banking.

Coming from a family of Duke alums, Rogers took a path less traveled and chose UNC Kenan-Flagler for his undergraduate studies. The Business School’s mission for academic excellence and teaching gave him the tools to succeed, he says.

“Day one I came prepared. I had the requisite skills to go through the training and have the knowledge and foundation to start my career. I was very appreciative of that,” Rogers says.

And he quickly realized that business was more than a science – it is an art, full of decision-making and creative thinking.

“There isn’t necessarily a right or wrong answer. It’s more about but how the answer is developed and why it’s developed,” Roger says. How you get somewhere can be just as important as the outcome itself.

As part of its Dean Speaker Series, the Frank Hawkins Kenan Institute of Private Enterprise hosted Rogers, where he shared advice and insights with students.

“You own your careers,” he says. “Students think that the first job, in the first week and first choice defines them as people. Nothing could be farther from the truth.”

Rogers credits his career success with continuous learning. In addition to earning his undergraduate degree from UNC Kenan-Flagler, Rogers earned his MBA from Georgia State University.

“You have to have an insatiable appetite to learn. That’s probably number one because the business environment that we all operate in is changing at an increasingly faster pace,” Rogers says. “Your own capacity to learn and expand is critical to be successful in today’s business world.” He adds that learning how to learn and being a lifelong learner will separate you from the crowd.

And for Rogers, true success isn’t just measured by his own personal accomplishments.

“I don’t keep a scorecard. I don’t think about my own personal achievement, I think about the impact that I and my company and teammates have on the community and our clients.” Part of success is being able to see the big picture.

“Every decision has an impact on somebody and it might not always be positive. You have to see implications of your decisions.”

Being a purpose-driven individual and company are important. He’s leading other Fortune 500 CEOs to take active roles in their employees’ financial wellness.

“We define our purpose as lighting the way to financial well-being. We want to help all Americans take the first step toward financial confidence.”

And that’s exactly what Rogers, SunTrust and the Kenan Institute of Private Enterprise are doing in Eastern North Carolina. They’ve partnered with NCGrowth to help businesses in Elizabeth City become more financially confident.

“Our foundation was able to make a significant contribution to that effort. We’ll work with businesses that represent the socioeconomic fabric of Elizabeth City, including minority-owned businesses and businesses that haven’t had the same type of access to capital.”

The SunTrust Foundation granted nearly $1 million to NCGrowth. The money will help create new jobs and stimulate development in rural and economically challenged communities. The NCGrowth staff and community partners will develop and complete a high-impact project critical to sustainable growth and regional success.

They will also work with educational institutions to help get companies there on a path toward smart growth and financial confidence, says Rogers. It’s an opportunity that he is truly excited about.

“I fundamentally believe that people want to do business with companies that stand for something,” he says. “There is never a point in time where I’m standing in front of teammates or in front of clients or in front of a community when I don’t talk about purpose.”

It’s a culture that SunTrust reinforces in everything that it does.

It’s the same for Rogers. He’s a champion for the company’s philanthropy and volunteerism.

Since he became CEO, the company is posting its seventh consecutive year of performance improvement, which demonstrated the strong correlation between purpose and performance.