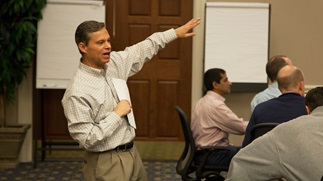 Barry Bayus is an innovator. His mission: to convince students that they’re innovators, too.

“Many students think they are not at all creative – but when put in the right mindset they begin to change their mind,” says Bayus, Roy O. Rodwell Distinguished Professor of Marketing at UNC Kenan-Flagler. “A lot of people realize that they are simply afraid to be creative in the typical business environment.”

An early creativity exercise in his courses asks students to invent a Chindogu – the Japanese art of making “unuseless” gadgets that seem like an ideal solution to an important problem.

For example, one student modified a simple clothes-drying rack to fit on top of her minivan. Calling her invention the “Hillbilly Clothes Dryer,” she demonstrated that it worked by having her husband drive the minivan to dry clothes while she videotaped it.

Lots of students get their friends, spouses and kids involved in this homework. “I don’t think that happens for their spreadsheet assignments!” Bayus quips.

Even though many students are apprehensive about the assignment, “everyone is able to create a Chindogu,”he says. Students learn that wild ideas need to be voiced because they can lead to really innovative ideas that have a lot of commercial promise.

His “Innovation & Design Thinking” courses in the MBA, Executive MBA (EMBA) and Undergraduate Business programs build on the thinking and priorities expressed by today’s companies. “The idea of human-centered design and design thinking is really catching on in companies,” says Bayus. “As a result, my courses over the last five years or so have emphasized the design thinking process.”

Only a handful of business schools currently have any degree-level courses on design thinking, says Bayus. “At UNC Kenan-Flagler, we are very active in bringing state-of-the-art thinking to our classrooms. My focus is on the fuzzy front end of innovation. We have several other great courses that deal with further developing and taking innovative ideas to market.”

And by offering non-traditional – some might even say outlandish – assignments, Bayus engages students in ways that force them to think outside the box. “It’s all part of using intrinsic motivation to get students engaged in the topic,” he adds. “I also like putting something out there that people don’t expect. And it doesn’t hurt to have fun assignments!”

To experience what is involved in creating a working prototype and the importance of product specifications, his students develop a vehicle made mostly out of fruits and vegetables. Teams then compete on distance and other criteria – like stylishness – in the “UNC Kenan-Flagler 500.” He developed this exercise with organizational behavior professor Dick Blackburn a number of years ago and it has undergone several revisions. Bayus keeps the “official” road in his office. 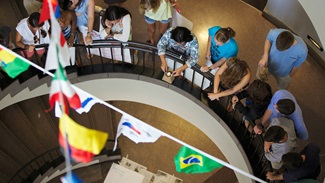 The messiest activity by far is the “egg drop challenge” for undergraduate students. In the space of a single class period, teams must develop a device to keep a raw egg from breaking when dropped from the McColl Building’s circular stairwell and create an advertisement for their device. “With this activity, students experience the entire innovation process first-hand in about an hour,” he says. “In addition, students are very creative in pitching their ideas – I’ve had posters, skits, jingles and videos in this short time frame!”

His MBA and EMBA students experience the innovation process in the “marshmallow challenge.” Small teams compete to construct the tallest free-standing structure with the marshmallow on top using only from 20 sticks of uncooked spaghetti, tape and string. In their reflections, students quickly realize that testing important assumptions early is crucial.

“Although I might have tripped over the odd class prop now and then, I know how valuable Barry’s work is – both in the classroom and out of it,” says Jennifer Conrad, Dalton McMichael Distinguished Professor of Finance. “Innovation – and competition on innovation by firms – is, in my view, a significant contributor to economic growth. Practitioners, future practitioners and academics need to understand it better, and Barry’s efforts in this regard are exemplary.”

Bayus has a full research portfolio with a number of projects in the works. Over his career, his interests have evolved from helping firms make better product decisions to new product forecasting, developing innovation strategies and generating innovative ideas for new products.

“Right now I am very interested in where innovative ideas come from, and the question of whether regular consumers can contribute to the firm’s innovation process,” he says.

He is very excited about an ongoing project with the UNC School of Medicine to determine whether crowdsourced messages are more effective than traditional methods – such as PSAs – in getting people to undergo HIV testing in China. Describing himself as one very small cog in the research program made possible by a grant from the National Institutes of Health, Bayus is the resident crowdsourcing consultant on the project. Preliminary conclusions indicate that crowdsourced messages are just as effective as the standard methods but significantly less expensive. “This project really has the potential to affect people’s lives,” he says. 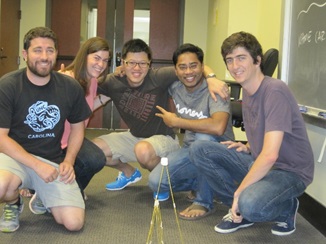 Bayus is also working on projects related to crowdfunding, a form of venture financing where people contribute small amounts of money to help entrepreneurs get their innovative ideas off the ground.

They are looking at various factors that might predict project support and contributions. One paper considers the role social media channels like Twitter play in soliciting contributions for crowdfunded projects. “Our results suggest that the tweets of project creators influence subsequent tweeting by fans interested in the project,” says Bayus. “But it is the fan tweets that lead to actual project contributions.”

They are also working towards better understanding crowdsourcing contests where community members compete for financial prizes by creating promotions for client brands. “We are very interested in how past experience might relate to performance,” Bayus says. “Are people with past experiences in winning contests likely to win again? What is the role of past unsuccessful experiences?” Although they are still analyzing the data, Bayus says that pure luck might play an important role in winning these types of crowdsourcing contests.

These research projects definitely keep him busy. Indeed, Bayus has published more than 50 research papers in academic and business journals and is the editor of the “Product Innovation & Management” volume for the “Wiley International Encyclopedia of Marketing.”

In recognition of his research contributions, Bayus received UNC Kenan-Flagler’s prestigious Weatherspoon Award for Excellence in Research in 2013. The Journal of Product Innovation Management named him among the world’s top five innovation management scholars in 2007 and 2012, and Management Science named him one of the top innovation researchers in 2004.

A former competitive runner with a few marathons under his belt – from when he was younger, he quickly clarifies – Bayus stays active by jogging and “not riding elevators.” He plays online chess, using some of his favorite moves from when he played in tournaments, and enjoys playing tennis, especially with his regular group of mostly retirees, which, he jokes, gives him the upper hand.

His younger son graduated from UNC Kenan-Flagler’s Undergraduate Business Program in 2012 and works for ESPN in New York. Although he could not have predicted it beforehand, both sons work in the marketing analytics domain. “While they still don’t really know what I do, I am very familiar with what they do in their day-to-day jobs,” says Bayus. “But my wife still doesn’t think that I do real research.”

His wife Anna is a “real” research scientist, working with fruit flies in a cell biology lab at Duke University. “It’s true,” he says, “that she is the only one in the family who owns a white lab coat!”

Bayus received his PhD from the University of Pennsylvania and worked on market forecasting approaches at RCA before he served on the Cornell and Wharton faculties and then joined UNC Kenan-Flagler in 1992.

He’s found his comfort zone at UNC Kenan-Flagler. “I’m very happy here. There are a lot of exciting things going on, not to mention I have great colleagues.” And just what keeps things interesting for an innovation guru?

“I love learning new things,” says Bayus. He also loves to surprise his students and challenge them to be innovators.