Balancing the books – and a NCAA Championship 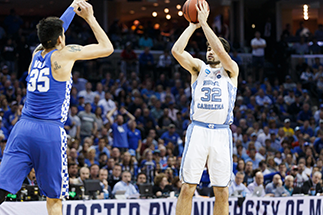 Many college students would agree that making it to an 8 a.m. accounting class – especially the morning after a gigantic March Madness win – is tough.

Nonetheless, power-forward Luke Maye (BSBA ’19) made Carolina history with a game-winning shot in the last 0.3 seconds of UNC’s Elite Eight game against Kentucky in Memphis – and still showed up on time the next day for his accounting class with Professor C.J. Skender.

Just 13 hours earlier, Maye made a legendary last minute, 18-foot jump shot to give North Carolina a 75-73 win over Kentucky, sending his team to their second consecutive Final Four. Maye was named the Most Outstanding Player of the South regional after scoring a career-high 17 points in that game.

Maye is accustomed to playing in front of crowds of more than 20,000 in the Dean E. Smith Center, which sits adjacent to UNC Kenan-Flagler’s McColl Building.

But Maye was not expecting to receive a standing ovation from his classmates in Koury Auditorium. When he walked into class precisely at 8 a.m. the next morning, one student started clapping and soon everyone was on their feet, celebrating Luke’s accomplishments.

Classmate and soccer manager Jack Sewell posted a video of the standing ovation on Twitter. It went viral, garnering thousands of shares and extensive media coverage, including ESPN and Sports Illustrated.

Maye, a Huntersville, North Carolina native, never expected to reach such fame outside of Tar Heel nation. He was a three-star recruit who committed to UNC with no promise of a scholarship for his first year. Coach Roy Williams eventually awarded Maye a scholarship just before he graduated from Hough High School.

In an interview with TMZ, Skender applauded Maye, who always sat in the front row in Koury: “He’s a great kid. Humble. He always comes to class.”

Skender’s dedication to and enthusiasm for his students is legendary. Like Maye, he is used to a “full house” – teaching more than 350 undergraduates in fall semesters and more than 700 in the spring semesters.

Those students know Skender’s classes are unlike any other.

He mixes course content and life lessons daily. Before each class Skender, who had been a college DJ, plays a group of four songs creatively called “fourplay” to set the mood. He often asks students to guess the theme or meaning of the playlist.

On the day after the win against Kentucky, Skender played the Bee Gees’ “First of May,” the Crickets’ “Maybe Baby,” Rod Stewart’s “Maggie May” and a beach music cut called “May I” by Maurice Williams and the Zodiacs. One “maye” say the theme of Skender’s musical selection that day was clear.

Skender pulled out a gas receipt totaling $32 and showed it on the overhead. He had filled up his car at a gas station the Thursday before the big game, when the machine clicked to a stop at an even $32 –Maye’s number. Skender thought of it as a good luck omen – and it seems to have paid off.

To commemorate Maye’s memorable shot, Skender asked Maye to sign his receipt, and class went on as normal. After all, there were many accounting topics to cover before the Tar Heels played in the Final Four.

Skender keeps in touch with former students. After news coverage about the standing ovation for Maye, Angus McDonald (BA ’95, MAC ’00, MBA ’05) wrote Skender and suggested he buy $2 of gas in tribute to Tar Heel star Joel Berry, who wears jersey No. 2 and had sprained his ankle in the Kentucky game.

On the Friday of the weekend that UNC played in the Final Four, Skender put exactly $2 of gas in his tank following McDonald’s suggestion. When the ball was tipped in Phoenix, Berry shined and he was named the Most Outstanding Player of the Final Four, leading Roy Williams’ team to his third and the University’s seventh national championship.

When the Tar Heels advanced to the championship game against Gonzaga, Skender played “Go All the Way” by the Raspberries, “Basketball Jones” by Cheech and Chong, “She Likes Basketball” from the musical “Promises, Promises” and Teddy Pendergrass’ “One Shining Moment” to commemorate the National Championship Finals game that Maye and Berry and their team would play that night.

Carolina pride was everywhere on campus after UNC beat Gonzaga 71-65, and when Skender’s class next met he had cued up “Something Just Like This” by the Chainsmokers and Coldplay, “We’re a Winner” by the Impressions, “Winners” by Frank Sinatra and Queen’s “We Are the Champions.”

And, true to form, Maye was back in class after helping his team win the National Championship – ready to get back to his studies. As Maye entered Koury to head back to his front row seat, the entire class stood up once again to deliver another well-earned standing ovation – and then joined in to sing the Carolina fight song.