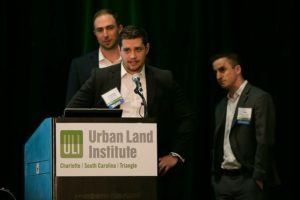 I’ve had my share of both throughout my life. And while I can’t profess to know everything about experiential learning, I can tell you that standing up in front of 300+ real estate professionals at a national-level convention and pitching a development opportunity you’ve poured your heart and soul into over the last six months…well, I’m pretty sure that qualifies as experiential.

That’s the opportunity that Trygg Danforth (MBA ’16), Adam Chechila (MBA ’16) and I had through the ULI Shark Tank, a challenge held during the organization’s 2016 Carolinas Conference that bears procedural resemblance to the TV show made famous by Mark Cuban and Scrub Daddy.

There were sharks, there was bait and there were pointed, insightful questions – the kind only titans of industry can really ask – that caught us off guard but also vastly expanded our real estate world purview. Ostensibly, we were there to secure funding for our project so we could move forward from the signed LOI and perform due diligence to lock up a Class-A credit-rated tenant for our industrial warehouse. There was another team coming after us that, just a few days prior, had demonstrated – in person – the extent of their technological capabilities, which may or may not have included holographic renderings. We had MS Paint. But I digress.

We were there to compete in the ULI Shark Tank. But at the same time, we were there to grow as students and professionals – to have our rationale questioned and alternatives proposed, to gain insight from the collective knowledge of five highly-qualified “sharks” and the room at large, and to network. Regardless of the outcome, we’d already won just by being a part of it.

What brought us there? What’s this project we’re pitching? As part of the capstone project for our UNC Kenan-Flagler real estate development class, we were tasked with finding a parcel of land, coming up with a highest and best use project and presenting it in front of potential funders. Several of the ideas pitched by previous students have received funding over the years. This is, of course, the ultimate goal – one worthy of celebrating.

My team quickly settled on a seven-acre site just outside of Mebane, NC. Over the next few months, we considered various site plan iterations. Industrial with a hotel pad? Industrial with self-storage? Only industrial? Single tenant or multi-use? Build-to-suit or spec? There were numerous discussions and phone calls with alums and industry professionals, strategy sessions with our teachers, meetings with the Mebane Planning Department, reworking of our Excel models, market research sessions and everything else you can imagine occurring during the beginning stages of a development project. This was real-life real estate.

In the months that followed we fine-tuned our project, survived an internal investment committee review and eventually reached a point where we felt we had an intriguing opportunity. We had good return metrics, project simplicity and MS Paint renderings. We had a signed LOI with the seller at a decent land price with agreeable terms. We had insightful feedback from classmates to help guide our thinking. We had the breadth and depth of UNC Kenan-Flagler’s superlative real estate curriculum as our backbone. We thought we really had something – and so did our professors.  The ULI Shark Tank was the perfect opportunity to put our project and development skills to the test.  After all, there’s no faking it in front of the sharks.

In the end, we didn’t come away with a sponsor check. Nor did we manage to flip the contract during cocktail hour. But what we did come away with was just as valuable: knowledge. Our project received high praise from the sharks and from everyone we spoke with. Some of the questions they posed really made us think and spurred additional discussions long after we exited stage right. Being up there was the culmination of months of hard work, expert guidance and a bit of luck. And our onstage presence was also thanks to the amazing expertise and support of the UNC Kenan-Flagler faculty and the foundational knowledge learned through what is arguably the best real estate MBA program in the U.S. As we stood in front of the sharks and pitched our project to a crowd filled with the who’s who of Carolina real estate, I couldn’t help but think of Drake’s eternal words: