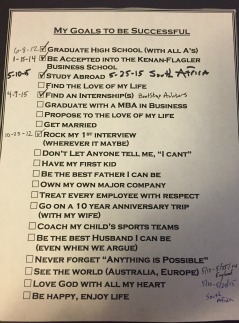 For nearly two years, Austin Helms’ (BSBA ’16) gaze was transfixed on one bullet on his list of personal goals:

“Be accepted into Kenan-Flagler Business School”

At 4:18 p.m. on January 15, 2014, he finally got to check the box on that goal. “‘We are delighted to offer you admission…’ was all I needed to send me into a whirlwind of excitement,” says Helms. “As soon as I heard, I called my parents, friends, relatives, former teachers and maybe even people that didn’t care. I had reached a milestone.”

It’s a moment Helms is sure he’ll never forget – in part because it’s documented on his blog, where he’s chronicled his college experience from the very beginning. The idea was inspired by a documentary produced and directed by Helms and his friends to capture their senior year of high school. When Helms was accepted to UNC, his mom encouraged him to do something similar to capture his journey.

Arriving in Chapel Hill, Helms was eager to step outside of his comfort zone. His mantra echoed Nike’s famous slogan: Just do it. As a first-year he explored a little bit of everything, from trying out for the JV cheerleading team and playing intramural flag football to joining various Christian organizations and working towards becoming a manager for the men’s JV basketball team. All the while, his sights were set on business school.

Helms’ interest in studying business came as no surprise to those who know him. His journey as an entrepreneur began early in life. At age seven, he favored cash over candy – so he saved his Halloween haul and sold it to friends and family. At 10, he started a business making and selling bows and arrows to neighborhood kids and hired friends to help. After a spat, he fired his entire staff and the business fizzled out. As a teen, he bought coin-operated gum-ball machines and placed them in small businesses throughout his hometown. And at 12, he started a car detailing business that would become the inspiration for another new venture – one born in class at UNC Kenan-Flagler.

Helms found his b-school groove in Jim Kitchen’s Intro to Entrepreneurship course. He sailed through the first project that challenges student teams to turn $50 seed money in a profitable business in less than a week, and raised a record $1,904 with his partner.

The project served as a warm-up for the biggest assignment students would have to tackle: developing a full-fledged business plan. Helms immediately got to work to bring his concept for Waterless Buddy’s, a wash-while-you-shop service with a sustainable twist, to life. Waterless Buddy’s uses a special cleaning formula that leaves cars spotless without using a drop of water. The simplified washing process requires just two supplies – cleaning solution and a microfiber cloth – and saves 45 gallons of water per wash compared to a standard car wash.

Building a business with the four friends he enlisted help from has been a challenge, but one Helms felt more prepared to navigate thanks to UNC Kenan-Flagler. Teamwork has been a common thread in his Business School classes and has pushed him to grow as a leader. When forming Waterless Buddy’s, Helms suggested setting goals to ensure his team was on the same page. “I wanted to see what everyone’s hopes were for the company,” he says. 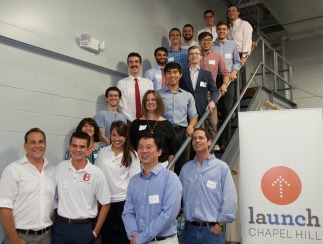 One of the goals the group agreed to focus on was growing their network. Being connected to the Business School expanded the co-founders’ network significantly and opened countless doors.

“I’m constantly in awe of how willing everyone at UNC Kenan-Flagler is to help,” says Helms, who credits professor Tim Flood for much of the success the Waterless Buddy’s team has had – including their third place win at the 2015 Carolina Challenge.

“Tim is a rock star. He taught us how to pitch effectively. I wasn’t in any of his classes, but he took time out of his day to build pitches with us. He’s brutally honest – he critiqued the crap out of us,” Helms says.

Another valuable connection came via Pat Garner’s Consulting to the Entrepreneurial Firm class, in which students worked directly with Southern Season CEO Dave Herman. When Helms and his partner were ready to test market the Waterless Buddy’s concept, Herman agreed to host the event at Southern Season’s flagship location in Chapel Hill, with proceeds benefiting the Share the Food Foundation.

And when the Waterless Buddy’s team was selected to represent UNC at the 2015 California Dreamin’ competition in Los Angeles, Susan Cates, president of UNC Executive Development and executive director of MBA@UNC, arranged for them to practice their pitch in front of 2U co-founders, including MBA@UNC student Chip Paucek.

Helms was also selected to participate in the inaugural cohort of UNC Kenan-Flagler’s Adams Apprenticeship, a game-changing program designed for all-in entrepreneurs. The program connects students with successful founders, funders and growth executives who serve as advisors and help identify the competencies, experiences and skills each apprentice will need in order to make a successful transition to full-time entrepreneur.

Although Waterless Buddy’s is still navigating the very early stages of business, the concept was promising enough to earn Helms and his partner an invitation to join the fourth cohort of startups in the accelerator program at Launch Chapel Hill. The program provides the tools and resources – such as office space and office hours with marketing experts, lawyers and accountants – needed to help entrepreneurs build their early-stage businesses into self-sustaining enterprises, as well as opportunities to learn from successful entrepreneurs and mentors.

The advisors Helms works with through the Adams Apprenticeship program and Launch Chapel Hill have helped him slow down and carefully think through what’s next for Waterless Buddy’s. “If we hadn’t been accepted into Launch, we would have rushed into everything,” he says.

What comes next remains to be seen, but Helms will consider the venture a success regardless. “I’m amazed at how this simple business concept has grown my network and opened so many new doors,” he says. “The saying, ‘the bigger your network, the bigger your net worth’ is incredibly true.” 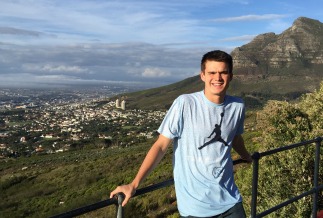 Towards the end of his junior year, Helms checked off another box on his list of personal goals: to study abroad.

Prior to enrolling at UNC, Helms – who comes from Valdese, a small town in the western part of the state – had never been east of North Carolina, south of Florida, west of Tennessee or north of Ohio. Spending two weeks on a Global Immersion Elective learning about social entrepreneurship in South Africa gave him a new perspective.

“It was cool to see that there are people across the world doing the same exact things that we do to build a business,” he says. “They’re doing so much with so little. We have so many more resources and could do so much more with the opportunities we have in the U.S.”

A quick scroll through Helms’ blog makes it clear that his UNC journey has been defined by taking chances and stepping outside of his comfort zone – and that his “just do it” approach has paid off. Reflecting on his experiences helps Helms – a UNC Admissions Ambassador – connect with future Tar Heels while leading campus tours. At the end of each tour, he hands out business cards with a link to his blog site in hopes that sharing his experiences will help others preparing to embark on their college journeys.

“My UNC Kenan-Flagler experience has opened my eyes to so much and opened so many doors,” he says. “As corny as it sounds, Carolina has given me the opportunity to spread my wings.”