Skip to content Skip to Programs Navigation
Are workplace friendships good for business?

Are workplace friendships good for business? 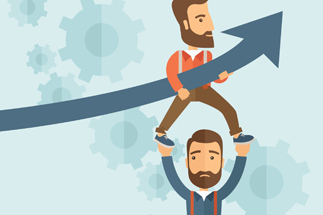 Americans spend more time at work than with their families, so it’s no wonder that workplace relationships are important to job satisfaction – and job performance.

Employees with friends at work report higher levels of productivity, job retention and satisfaction than their “friendless” counterparts. In fact, studies show that people who report having workplace friendships are seven times more likely to be engaged in their work than those who don’t.

To help fill that void, Jessica Christian, UNC Kenan-Flagler clinical assistant professor of organizational behavior, decided to research the impact of workplace friendships on job performance with Jessica Methot of Rutgers University, Jeffery LePine of Arizona State University and Nathan Podsakoff of the University of Arizona.

They took a distinctive approach to classifying workplace relationships, one in which friendship and task-focused interactions are superimposed – forming a “multiplex” friendship.

“When it comes to multiplex friendships, there’s a denser tie between individuals – not necessarily one that’s more important, but more complicated and richer because the friendship component coexists with the work relationship,” says Christian. “These are the people at work who you consider friends, but also turn to for professional guidance or help with work projects.”

As it turns out, multiplex friendships are generally a good thing for job performance, says Christian. They facilitate supportive interactions in the form of reliable and candid personal feedback, emotional support and career strategizing.

The researchers published their findings the article “Are workplace friendships a mixed blessing? Exploring tradeoffs of multiplex relationships and their associations with job performance” in Personnel Psychology.

Multiplex friendships are complicated.
To measure the impact of multiplex friendships on job performance, the team first compiled data from a sample of 168 employees and their supervisors, all working at a large insurance company in the southeastern U.S. After employees responded to questions about personal network size, emotional exhaustion and work-related emotions, supervisors provided ratings to measure individuals’ task performances.

The researchers found evidence supporting their theory that the size of a worker’s multiplex friendship network has a positive relationship with task performance.

But the study also revealed that this type of workplace relationship has detriments. While scoring higher supervisor ratings, employees citing larger multiplex networks reported an increase in emotional exhaustion associated with their work.

Multiplex relationships foster exhaustion because a large number of direct connections can deplete an individual’s resources, making it more difficult to prioritize high-quality social bonds on top of workplace responsibilities.

On the other hand, multiplex networks also showed a positive relationship with work “positive affect” – such feelings as joy, interest and alertness. These employees reported having more positive feelings toward work, which in turn helped mitigate and replenish the negative effects of emotional exhaustion.

“Multiplex friendships actually led employees to feel greater degrees of exhaustion,” Christian says. “But at the same time, people who reported having more of these relationships performed better and got higher supervisor ratings – in part because the positive emotions stemming from their positive work relationships helped to offset the negative effects.”

Christian and her team delved deeper into the effects of multiplex friendships with a second study. This time, they looked at a few more mechanisms behind the emotional exhaustion and work affect components.

Using a sample of 182 workers at retail stores and restaurants, the researchers introduced measures of trust and emotional support, hypothesizing a positive relationship between the two factors and multiplex workplace friendships. They also sought to measure factors on the detrimental side of the spectrum – this time asking questions about the degree to which employees felt indebted to their coworkers and the difficulty of maintaining interpersonal relationships at work.

And the overall story stayed the same.
The second study found that trust had a positive impact on job performance, which again helped counter the difficulty involved in maintaining these multiplex relationships.

“Workplace friendships with that instrumental component help us by increasing emotional support and trust, which ultimately helps us perform better at work.” Christian says. “But it’s still important to be aware of the difficulties.”

Don’t overlook the importance of informal networks, she says. Instead, managers should understand when to leverage these networks to respond to unanticipated problems and improve job performance.

“Social networking platforms are a good thing when it comes to helping employees develop friendships along the instrumental work lines,” Christian says. “They are good not only for the employees themselves to develop these trusting and supporting relationships, but because they actually do impact job performance.”

As an employer, helping workers map and craft their personal networks allows managers to intervene and provide support when emotional exhaustion begins to strain an employee’s morale. In today’s workplace, it’s becoming easier to carefully foster these types of relationships – with computer-based social networks acting as key facilitators. Implementing social intranet systems also allows employees to exchange task-related information while getting to know each other on a more personal level.

“Developing the kind of advice networks at work where people can seek job-related help proves beneficial to employees and their managers,” Christian says. “Advice networks — systems where employees can find out who in the workplace has dealt with certain problems — can help employees by not only connecting them to valuable information, but also for friendship formation and building multiplex ties.” When co-workers become friends, greater workplace engagement is likely to occur.

Managers who are interested in reaping benefits from helping employees develop multiplex relationships can take some proactive steps. In cross-functional meetings, for example – where employees are likely to meet people outside of their normal networks — managers can start the meeting by asking each person to provide one personal detail or interest. Finding common ground – such as a love of a hobby or a sports team – might end up sparking a friendship.