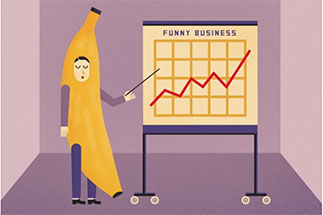 What happens when your boss tells a joke? Does it break the ice – or make you uncomfortable?

Joking around can be helpful, but too much or the wrong kinds of humor can lead to some seriously unfunny workplace outcomes, says Mike Christian, associate professor of organizational behavior at UNC Kenan-Flagler.

He researched “The Mixed Blessing of Leader Sense of Humor: Examining Costs and Benefits” with Kai Chi Yam and Zhenyu Liao of the National University of Singapore, Jared Nai of Singapore Management University and Wu Wei of Wuhan University. Their work appears in the Academy of Management Journal.

They looked at humor through the lens of benign violation theory (BVT), which explains why we find things funny.

According to BVT, we find something as humorous when we perceive a norm violation and – at the same time – find it nonthreatening. Take this lawyer joke, for example: “What do dinosaurs and decent lawyers have in common? They are both extinct.” People would probably not find it funny if it were accompanied by photographs of dead lawyers.

Second, telling jokes might strengthen “leader-member exchange.” Humor can implicitly convey the sense that leaders are open to more permissive, less formal relationships with people they manage. This can result in more candid communications between managers and workers, defuse conflicts and boost creativity.

To measure how humor affects employee perceptions and behavior, the researchers conducted two sets of surveys.

Over six weeks they administered three surveys to 340 participants who worked full time and were part-time MBA students at a large university in central China – with 215 completing all three surveys.

The first survey asked to what extent leaders at work used humor. In the second survey, participants completed an instrument to measure their perceptions of norm violation acceptability. They reported their own norm-violating behaviors in a third survey, which included items such as making fun of someone at work and taking property from work. The students were compensated ¥20 RMB (about $3) for completing all three surveys.

The researchers found a positive correlation between leader sense of humor and perceived acceptability of norm violations. And respondents who said they thought norm violations were more acceptable also reported higher levels of deviating from norms themselves.

“Leaders, essentially, are seen to be role models. They help employees process information around what’s happening in their organization,” Christian says. “When a leader makes any sort of comment or displays any kind of behavior, they’re symbolically making a statement to their employees that this is what they expect around the organization.”

So a manager who jokes about padding an expense report might prompt other employees to think it’s OK to engage in that behavior.

In addition to leader humor, researchers measured acceptance of norm violations and deviant behavior. They also asked whether leader humor was aggressive, assessed leader-member exchange (the quality of the leader-subordinate relationship) and levels of work engagement.

Like the study of Chinese employees, the U.S. study found similar results: More humorous leaders conveyed a message that norm violations were acceptable, which was linked to greater norm deviations by employees.

The U.S. surveys also showed that leader humor was associated with higher leader-member exchange and increased engagement at work.

“The lesson is not ‘don’t use humor.’ We know that humor can be important at the right time, especially in defusing conflict, establishing trust and creating better relationships with employees,” Christian says. “But it’s important that leaders are aware that if they use too much humor — they’re always joking or if they use the wrong kind of humor, such as ridicule or teasing — they are more likely to send the wrong signal.”

In other words, humor can be good. But too much joking around might lead to outcomes that aren’t funny at all.