Skip to content Skip to Programs Navigation
An incredible journey 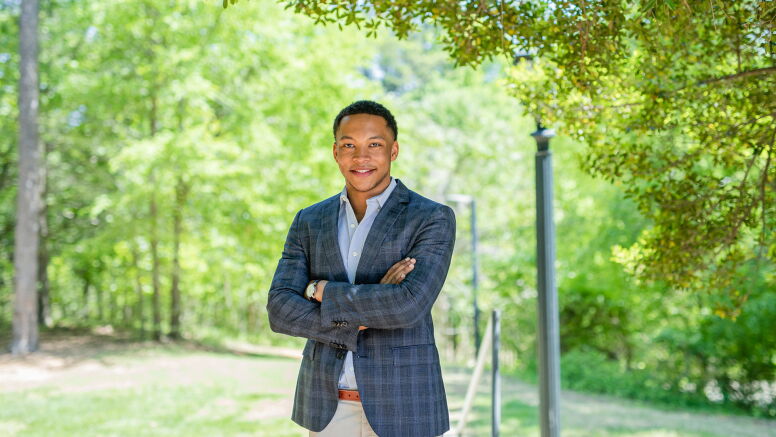 As a member of the UNC varsity cheerleading team, Acquaye had a front-row view of Carolina men’s basketball’s heart-stopping 2022 NCAA championship run.

“It was priceless, especially the Duke game,” says Acquaye. “That was the pinnacle of a Chapel Hill experience. I wish I could have been in two places at the same time. I’ll never forget what it was like to share that experience with the students in New Orleans and then with everyone else back in Chapel Hill.”

A little over a month later, he was back at UNC Kenan-Flagler Business School to graduate and then begin his next chapter as an investment banking analyst with Morgan Stanley in New York. It’s a position he landed following a summer internship.

Cheerleading was an unexpected opportunity. He went with other first-year students to a pep rally to learn basketball and football cheers during the first week of classes. Acquaye was called up on stage to play a trivia game and was never sent back into the stands. He started to pretend he was one of the cheerleaders.

The team invited him to its practice. He had never cheered before, but he gave it a shot and ending up cheering all four years at Carolina.

When opportunities present themselves, Acquaye typically jumps on them. Other times, he makes his own.

That mentality guided his time at UNC Kenan-Flagler. He didn’t arrive with built-in business connections or much exposure to finance and investment principles. That quickly changed. 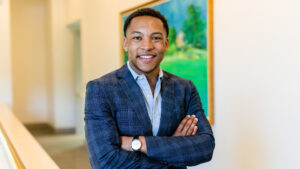 “Coming here I learned about all these different opportunities that set me on a path to go forward and develop my own journey,” says Acquaye. “I knew going to UNC and Kenan-Flagler that no matter what I did I would ultimately come out on a pathway that I was proud of.”

Growing up in Richmond, Virginia, Acquaye became interested in business and entrepreneurship through his father who owned an auto transport company, but he wasn’t sure what he would focus on in the Undergraduate Business Program.

He joined Scale and Coin, a professional business organization, and co-founded the Undergraduate Venture Capital Club. But he was always open to other facets of business.

He became fascinated by cryptocurrency and the democratization of finance. He admired the power of venture capital to “break the laws of physics” by building a startup from nothing to something great. In the spring semester of his senior year, Acquaye completed an internship with Chapter One, a web3- and cryptocurrency-focused venture capital fund. There, he worked alongside Doug Dyer (BSBA ’08), the fund’s CFO. 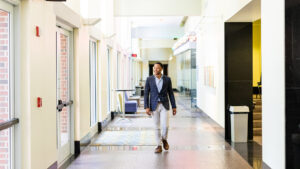 “UNC Kenan-Flagler exposed me to an entirely new world, to different people and perspectives and insights,” says Acquaye. “I don’t think I’ve been in an environment where that was so celebrated, whether in the classroom or outside of it. That was extremely impactful for me. Part of my driving factor in coming to UNC and then Kenan-Flagler was its collaborative culture. I always felt really supported.”

Two big events also motivated Acquaye: the COVID-19 pandemic and the Black Lives Matter movement. Early in 2020, as COVID-19 case numbers climbed Acquaye talked with a roommate from his sophomore year, Vincent Chen (BSBA ’22), about the availability of protective masks in the U.S.

“We were appalled at the price gouging that already surrounded masks,” says Acquaye. “We knew it wasn’t appropriate or morally right.”

Acquaye and Chen got to work quickly on what would be known as the Tar Heel Mask Initiative. They developed relationships with mass manufacturers and international distributors to offer affordable masks to those who needed them the most, including the elderly, health care providers and service workers. By August 2020, they had sold 100,000 masks, all while Acquaye was back home in Richmond when UNC classes went remote.

“It was amazing to see the fellow Tar Heels supporting us. And within a few weeks, there was a group of UNC Kenan-Flagler professors like Markus Saba and Scott Brown giving us feedback,” says Acquaye. “That was incredibly valuable.”

In January 2020 Acquaye joined BLK Capital Management, Corp, a hedge fund run entirely by Black undergraduate students across the U.S. Floyd’s murder pushed him to become more involved, he says. He served as a research analyst and later head of sponsorships for BLK in support of its larger mission of getting more Black students into professional finance roles.

“Representation matters in terms of helping students see what’s possible and attainable,” says Acquaye. “Being in a position where I could help facilitate conversations with Black business students and Black business leaders, you could see that the impact was pretty immediate.”

It’s that type of commitment to helping others succeed that led to one more incredible moment during Acquaye’s senior year. He received the Hampton Shuping Prize, an annual Chancellor’s Award for the outstanding undergraduate majoring in business.

Academic achievement is part of the award’s qualifications, but so is leadership, honor and integrity. To Acquaye, those three matter the most.