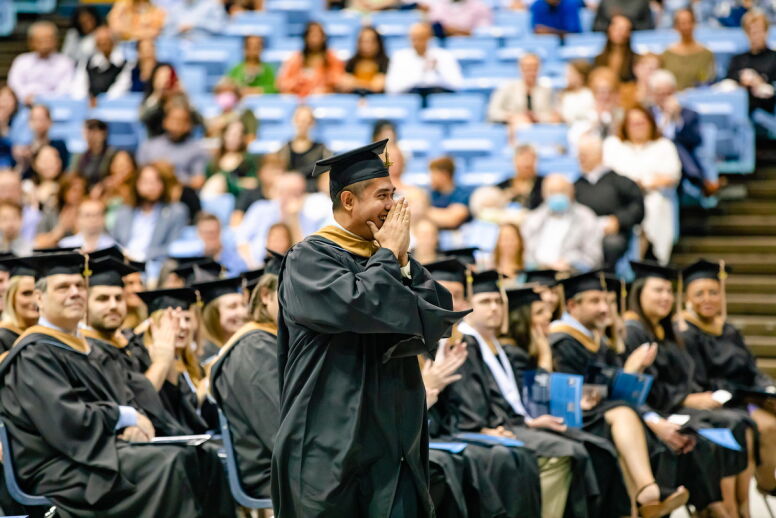 When Lek Sacramento (MAC ’22) flew from his vacation in California to graduation at UNC Kenan-Flagler Business School, he spent a layover at Dallas Fort Worth International Airport. There he finally met in person one of many classmates who made a tremendous impact on his life every day for nearly two years. 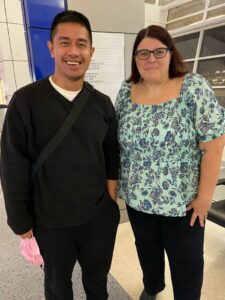 Classmate Amy Smith (MAC ’22) wasn’t able to attend the UNC Kenan-Flagler Master of Accounting Program’s graduation ceremony, but she made time for Sacramento. She was at the airport at 6 a.m. to catch up with him for 40 minutes.

Sacramento had been so sure that meeting his classmates would be awkward. Instead, as soon as he saw Smith, he felt just like he was reconnecting with a very close friend.

And as soon as he walked into the Dean E. Smith Center to pick up his diploma days later, he realized his classmates had become family.

“It was like there had been no distance whatsoever,” says Sacramento. “My classmates just started screaming for me, calling my name. I’ve never had quite that experience.”

Students enrolled in the MAC Program’s online format typically come to Chapel Hill for an in-person orientation and leadership immersion. That wasn’t the case for Sacramento’s class.

He received his acceptance letter just days before he was put on COVID-19 lockdown in his native Philippines. He began classes in June 2020 when the pandemic was perniciously infiltrating the world.

So, when Sacramento came to Chapel Hill for the first time – for his graduation in October 2022 – what he wanted to do the most was to meet all of the people who shaped his MAC experience.

He posted selfies with Jana Raedy, associate professor and EY Scholar in accounting , and Courtney Knoll, clinical professor of accounting and associate dean of the MAC Program, calling them both MAC legends. 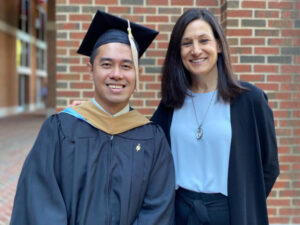 Sacramento tracked down Tanja Snively, clinical assistant professor of accounting, who taught him in four MAC classes. Sacramento and his mom had dinner in town with Lynn Dikolli, clinical assistant professor of accounting, and then had another meal with his original orientation and leadership immersion groupmates and their families.

“If the virtual approach didn’t work, we all would not have such a bond,” says Sacramento. “I did not think we would be so close. When I was flying back to Philippines, classmates were texting me to ask if I was safely back home.”

Sacramento was one of six MAC students named co-valedictorian at the commence ceremony. He was inducted into the Beta Gamma Sigma Honor Society and received the Robin Bradford Reynolds Memorial Award.

But to him the biggest honor was simply being accepted into the MAC Program. He saw it as a long-delayed chance to begin the career in accounting he had always wanted.

His mom was the first CPA ever in his hometown of Pasacao, a small seaside town 10 hours away from Manila, where farming and fishing are the main income sources, and many residents are unable to go to college.

Sacramento’s parents always emphasized the power education has to open opportunities for him. He got his bachelor’s in management from Ateneo de Manila University and followed it up with an MBA from the National University of Singapore. He didn’t take an undergraduate degree in accounting because it was not offered in the college he attended.

After college, Sacramento worked as a consultant in Indonesia and Singapore before returning to the Philippines in 2016 to be closer to his family after his father died. Soon after, he landed a job with Coca-Cola Beverages Philippines where he worked within human resources, strategic planning and business transformation. He was also part of a team that successfully negotiated a joint venture to build the Philippines’ first PET bottle recycling plant.

While enrolled in the MAC Program, he spent almost a year working with the accounting research team based in Atlanta to support the US GAAP reporting requirements of Coca-Cola units in Asia Pacific.

But he could never quite get accounting out of his mind.

“I’ve always referred to accounting as a noble vocation, as a calling,” he says. “I tried to suppress it, but the calling was calling me.”

When he found UNC Kenan-Flagler, he found everything he was looking for in a MAC program.

Unlike other schools he considered, UNC’s MAC Program did not require a prior accounting degree. He could take classes at home in the Philippines, the curriculum looked rigorous and faculty members impressed him.

“I was going for a program where I did not have to jump over a lot of prerequisite hurdles,” says Sacramento. “And a lot of places were telling me that was impossible. UNC, on the other hand, was telling me that their program was really a second chance for me. They said that you can have any background, that you just need to bring your grit and your desire to learn.”

Sacramento had never enrolled in a virtual degree program and there were challenges. The time zone difference was hard — he was 12 hours ahead of Chapel Hill — but as soon as classes began, he knew he made the right choice.

He loved taking financial reporting and auditing. He collaborated closely with fellow students and share his perspectives from his time with Coke. He appreciated the emphasis faculty placed on personal integrity.

Even the class he said was the hardest, federal income taxation, he learned to love. “But I still feel like tax doesn’t love me back,” he quickly adds.

As classes continued, he left Coke to focus on preparing for a new career. Accounting had been right for him after all.

“I don’t regret anything about this,” says Sacramento. “In fact, I’m even more convinced now that it was the right step. I couldn’t be happier.” 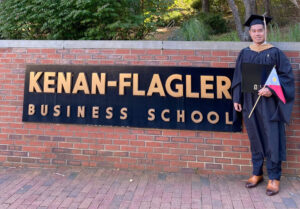 Sacramento is excited for the future, even though he doesn’t know exactly what it will bring.

He plans to rest for a while at home in a Manila suburb, spruce up his resume and connect with MAC alumni in New York about jobs. He’s focused on becoming a CPA like his mom and wants to move to the United States for work. MAC staff and faculty offered to help him.

“I’m very much convinced that we have the best faculty and of any accounting program in the United States,” says Sacramento. “Never have I seen a program that’s so rigorous with content, but at the same time has faculty and staff willing to give so much time to students whenever they need it.”

He also shared one more photo from his MAC Program experience on LinkedIn. Flying back home from North Carolina, he focused not on professors and classmates but on his mom.

In a photo, Sacramento is sitting next to his mother on the plane. He’s wearing his mortarboard and a UNC Kenan-Flagler hoodie while holding a glass of champagne. His mother holds up his diploma’s envelope emblazoned with the School’s name for the camera.

“We came to the U.S. empty handed. My Mom and I are going home with my second graduate degree,” Sacramento wrote. “My heart is full and screaming UNC Master of Accounting forever!”