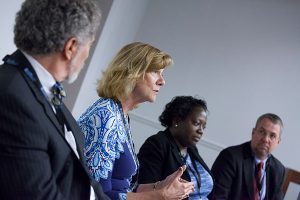 By the late ‘60s, the population explosion of the baby boomers prompted American leaders to rethink social and economic policies with a fledgling, young generation in mind.

“Aging still isn’t something the country pays a lot of attention to,” says Patricia Sprigg, president and chief executive of Carol Woods Retirement Community. “We’ve just missed the point when it comes to some of the systems we’ve put in place, especially when dealing with long-term care.”

Sprigg spoke at the Frank Hawkins Kenan Institute of Private Enterprise’s “What’s Next, America?” conference, where she and other industry professionals discussed the urgent economic and policy implications that a large aging population has on our nation’s present and future. It’s a phenomenon known as “the silver tsunami.”

The panelists framed their discussion around three of the most pressing aging challenges facing the next presidential administration – cost, caregiving and coordination – and provided policy recommendations that aim to build better systems.

“But even if we do get people to go to school right now for this kind of work, they won’t only rack up student loans,” Sprigg says. “They’ll also come out to find lower paying jobs because we just haven’t properly valued their work.”

Seventy percent of those 65 and over will need a minimum of three years of care. But on the labor side, 55 percent of caregivers are either unemployed or underemployed because of the care they’re giving.

Considering a more open-door immigration policy could bolster the long-term care workforce, the panel suggests, as could providing federal funds to encourage people to pursue careers in long-term care.

Eighty-two percent of seniors have a chronic condition, and 54 percent have two or more. The coordination of support keeps people functioning at higher levels, but this requires coordination between the government, health care systems, in-home providers and businesses during transitional phases of care as well.

Better coordination will first require making the business case for increasing expenditures. But by demonstrating the economic impact of redesigning environments to be more universally accessible and showcasing this opportunity for job creation, a bipartisan case could be made.

The prices associated with aging are unsustainably high

The panel recommends investing more heavily in Section 202, a supportive housing program for the elderly, and Section 8 housing, which administers rental subsidies for qualified low-income tenants, as means of offsetting the cost of living for those who need long-term care.

But the panel also says there’s an opportunity to create economic engines out of the current cost challenges associated with aging. There’s good evidence that providing long-term care in the home is cheaper than doing so at a nursing home or assisted living facility, the panel says, so the next step includes creating a plan to bring homes up to the necessary standards of accessibility and comfort.

“Updated homes become the place and platform where there’s a concentration of clients and an opportunity for innovation in terms of a scalable business model,” says Louis Tenenbaum, founder of the Aging in Place Institute.

“And functionally for the service providers, which include the hospital systems and organizations, getting to deliver service without paying for the real estate is great.”

The full discussion, with additional insights from panelists Tom Akins, president and chief executive at LeadingAge North Carolina, and Joyce Rogers, senior vice president of government affairs at AARP, can be found below.