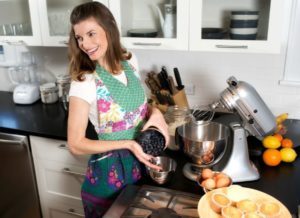 In 2002, Voorhies discovered she was gluten sensitive after two years of misleading diagnoses. Determined to eat the foods she loved again, she began baking and selling gluten-free and dairy-free desserts. In 2003, Voorhies opened Crave, the first gluten-free bakery in San Francisco.

“I had no idea I would become one of the leaders of the hot and now ubiquitous gluten-free industry,” she says. “I just knew I saw a problem in the market and wanted to solve it. The wholesale business grew until I was selling products in 12 states, through multiple distributors and in high-end independent retail chains such as Whole Foods, New Leaf, Mollie Stone’s and others.”

Voorhies encapsulated her experience, stories and recipes in a 10th anniversary cookbook, published in 2013. After 10 years, she was ready to move on to other ventures and move back east to be closer to her family in the Triangle. “I had accomplished everything I set out to do with Crave and was able to license the brand name to another West Coast company,” she says.

After transitioning out of that business, Voorhies was approached by contacts who wanted her to handle their company’s marketing work. In 2012, she founded her second company, Migrate Media. The company specializes in social media, marketing strategy and execution, and branding.

“Marketing and branding have always been my passions,” she says. “Because of my experience, I have been able to build Migrate Media very organically, getting all my business by referral. Each time I take on a new client, the learning curve starts all over again. It’s exciting getting to learn about a new industry and brand.”

When she needed to hire interns, Voorhies turned to her alma mater. “UNC Kenan-Flagler has impressive students. They are prepared to jump into a job role and contribute significantly to a company’s goals if the proper infrastructure is provided to them,” she says. “Interns play an integral role in the daily operation of Migrate Media. I have created roles that allow for autonomy, creativity and learning. They are not just doing grunt work, but work that matters and has visibility.”

“Working with Cameo has provided me with hands-on experience that was beneficial in my job search,” says Kristen Busby (BSBA ’15), one of two UNC Kenan-Flagler undergrads who interned for Voorhies. “Not only was I able to work alongside Cameo to learn the business, but she also trusted me to take responsibility for several of Migrate Media’s clients. This experience will be beneficial as I go on to fulfill my role in Gap Inc.’s Retail Management Program. It has given me an understanding of how large a role social media plays in a company’s presence and efforts to grow its business, particularly in an increasingly digital world.”