All work and no sleep makes Jack a bad boy 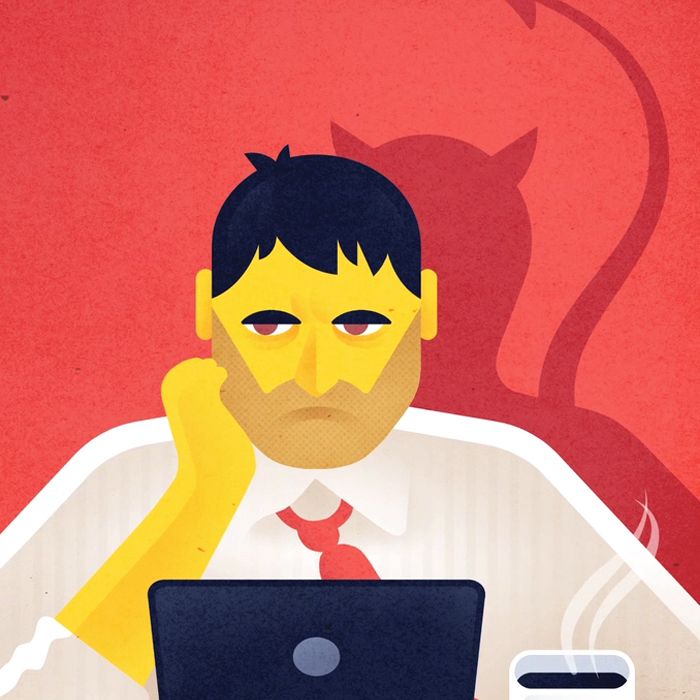 Lack of sleep can lead to poor decisions and deviant behavior.

Managers have long measured employees’ work ethic by the number of late nights at the office or midnight replies to emails, but recent research shows that this standard might be misguided.

When long hours interfere with a good night’s sleep, employees might become more likely to engage in negative, or even unethical, behavior at work.  Contrary to popular belief, the employees getting the least amount of shuteye are the ones that managers most need to keep an eye on.

UNC Kenan-Flagler assistant professor Michael Christian and University of Arizona associate professor Aleksander Ellis examined this phenomenon in “Examining the Effects of Sleep Deprivation on Workplace Deviance: A Self-Regulatory Perspective,” an article published in the Academy of Management Journal.

Workplace deviance includes a wide spectrum of behaviors that violate organizational norms and threaten the success of a company, ranging from rudeness and withheld effort to theft and violence. While their severity varies, all pose a costly threat to organizations that is becoming increasingly common.

“Organizational deviance and unethical behavior are becoming more and more of a problem in today’s competitive business world,” said Christian. “With this study, we tried to identify predictors and factors behind some of the bad choices people make at work.”

One of those factors might be sleep deprivation, a condition that has become almost a norm in the modern workplace. Over the past few decades the number of hours worked annually in the United States has steadily risen, while the amount of time spent sleeping has dropped. In fact, the number of Americans who sleep fewer than six hours per night jumped from 13 to 20 percent between 1999 and 2009.

Christian hypothesized that the link between sleep deprivation and deviance lies in the prefrontal cortex, the “executive” area of the brain that controls emotions and helps inhibit behavior. Sleep deprivation impairs its functioning, reducing the brain’s ability to regulate mood and triggering hostility. When this hostility is combined with a reduction in self-control, employees might be unable to resist destructive or unethical impulses promising short-term rewards as they attempt to balance their emotions and improve their mood.

To test this theory, Christian surveyed nurses at a major medical center about their sleep habits and behavior during shifts. When responses were controlled for individual sleep requirements, nurses who slept less than six hours the night before were more likely to commit deviant acts, such as making a hurtful comment to someone at work or intentionally working slower than they could have.

The results of the field survey were backed up by a lab study conducted on a group of business students at a large southwestern university. The students were split into two sample groups, with half spending a full 24 hours awake and half getting a good night’s sleep. The next day both groups were asked to serve as mentors for their business school and respond to questions from potential applicants, an experiment designed to mimic a standard task in customer service. Sleep-deprived participants were more inclined to write inappropriate, negative or hurtful responses, suggesting that sleep deprived employees might having difficulty keeping their emotions in check when dealing with customers.

In another task, participants were asked to self-check their answers on a multiple choice test and reward themselves for each correct answer by taking one dollar from a cash-filled envelope. Sleep-deprived participants gave in to the temptation to steal unearned money more often than their well-rested counterparts, signifying that tired employees might be less able to resist unethical behavior.

“What I found in both the field studies and the lab studies was that sleep deprivation had a small but significant effect on deviant behavior,” said Christian. “When you think about things like workplace deviance, even small effects can be meaningful.”

With deviant behavior costing organizations in the United States as much as $200 billion each year, the prevailing attitude toward sleep deprivation might be worth reconsidering.

“It’s almost like a badge of honor when you’re sleep deprived,” said Christian. “People who work in high pressure, high-intensity environments brag about how they haven’t slept, and managers often encourage that.”

To combat the negative consequences of sleep deprivation, managers should instead work to reduce long hours with smart scheduling, overtime restrictions and frequently scheduled breaks. When a looming deadline makes long hours unavoidable, managers should be mindful of their employees’ mental state and avoid scheduling tasks that require a great deal of self-control.

More unconventional solutions, such as workplace napping and sleep awareness training, also can help ensure that workers are well rested.

But coffee, one of the most tried and true remedies, might be just as effective. Preliminary evidence from one of Christian’s follow-up studies – with co-authors Dave Welsh, Aleksander Ellis and Mike Ke Mai – suggests that providing employees with caffeine can completely reverse the negative effects of sleep deprivation, at least in the short term.

Regardless which preventative measures managers take, Christian suggests that the first step toward reducing workplace deviance is a simple change in mindset.

“We need to work on developing awareness about the effects of sleep deprivation,” he said. “In some cases, corporate culture can reinforce this myth that working hard and working well involves not sleeping, but this study shows that isn’t the case.”