Alexander Jackson: Success is earned through choice, not chance

When opportunity knocks, you answer it – but then what?

As Alexander Jackson (BA ’15, MAC ’16) will tell you, success is earned through choice, not by chance.

Jackson grew up in Houston, where he was raised by his mother and grandmother. In his early elementary days, he was no stranger to getting into trouble and being suspended from school – yet he was constantly told that he was “just not being challenged academically.” After several years, his family knew something needed to change.

At age 10, he moved to the suburbs of Houston with his great aunt and uncle. A year later, they packed up and moved to Dallas – and this time, Jackson’s address wasn’t the only thing that changed. He was used to moving around, but relocating to Dallas was a completely different situation. Suddenly, he found himself hours away from everything he’d ever known – including his mother and grandmother.

Finding the East Dallas Boys & Girls Club changed everything – this time for the better. “They didn’t care about my past – they just wanted to ensure that I had a better future,” says Jackson. “The Boys & Girls Club introduced me to a life that I never thought was possible.”

Jackson’s involvement with the organization funneled his energy into productive outlets and afforded him incredible opportunities. But it was the people that made the greatest impact – leaders like Charles English, president and CEO of the Boys & Girls Clubs of Greater Dallas, who often stopped by to challenge Jackson and his friends to a game of dominoes.

English made a point to ask Jackson about his interests and plans for the future. He also connected Jackson with Gerald Louviere, a partner at PWC and chairman of the Boys & Girls Clubs of Greater Dallas. Through their mentorship, Jackson began to understand how pursuing a business career could help him achieve success beyond anything he’d thought possible.

“The relationships I made through the Boys & Girls Club set me on the right path,” he says. And that path brought him to Carolina.

When applying to colleges, Jackson wanted some space. “UNC was 1,500 miles away from home and is a pretty great school, so it was the perfect combo,” he says.

The Carolina Covenant afforded Jackson the opportunity to graduate from UNC debt-free, thanks to a combination of grants, scholarships and work-study jobs. As a Covenant Scholar, he participated in the Master of Accounting (MAC) Mentorship Program, which helps UNC undergrads from any major gain essential business skills and learn about the accounting profession from successful alumni.

While Jackson’s interest in business was rooted in practicality, giving back was his true passion. He’d become a Boys & Girls Club volunteer at age 16 and joined the staff two years later. When he came to Carolina, he signed on as a mentor and math tutor with the Durham club.

“As I became older and began to realize how my life had progressed, I wanted to provide the same opportunities to other kids who grew up in similar situations,” he says. “I want to open their eyes and show them there is more they can do.”

MAC Mentor Matthew Keffer (EMBA ’98), an assurance partner at PwC, helped Jackson realize that he didn’t have to choose between pursuing a business career and having a heart for service.

“Matthew showed me what it was like to work at a Big 4 accounting firm while giving back to the community,” he says. “That is what influenced me to become part of the MAC program.” 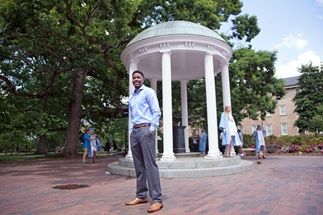 Jackson was determined to make the most of his Carolina experience. When he wasn’t in class, he split his time between working part-time jobs across campus – at the School of Medicine, Carolina Union, School of Law and the UNC Cecil G. Sheps Center for Health Services Research – and volunteering.

Everything seemed to be falling into place. Then, life happened.

Jackson spent the last semester of his senior year in Spain on a study abroad trip. The week of final exams, he learned his mother had passed away. He flew home the next day to handle next-of-kin responsibilities and finished his finals in the States.

The following weeks were hard on Jackson – but with grad school on the horizon, he knew what he needed to do. Jackson headed back to Chapel Hill and found an apartment. He resumed his job as an accounting technician at the UNC Sheps Center, where he worked just under 40 hours a week to ensure he’d be able to take care of himself. Having some distance from Texas and returning back to the town that he’d grown so fond of, coupled with the ability to support himself financially, was the therapy he needed. Things were looking up again.

Then, in early May – the day before his undergraduate graduation – his grandmother passed away.

Jackson was no stranger to overcoming adversity, and he was determined not to let difficult circumstances derail his future. Although his relatives were more than 1,000 miles away, he was surrounded by the love and support of his Tar Heel family in Chapel Hill.

“I’ve always had friends that took me into their families for Thanksgiving and Easter. One friend’s family brought me a cross from their trip to Israel,” says Jackson. “I knew the support I needed was always around me.”

Jackson’s life came full circle at UNC Kenan-Flagler. His experience in the MAC Mentorship Program solidified his interest in pursuing an accounting career and earning his master’s degree. What began as a practical decision has grown into a true passion. “People say accounting is boring,” says Jackson. “I find it interesting. I wanted to be here in the MAC Program. I wanted to learn more.”

Thanks to the generosity of fellow Tar Heel Eddie Sams (BSBA ’71), Jackson received a scholarship to do just that.

Jackson stayed involved with the MAC Mentorship Program, transitioning from mentee to mentor. And PwC — the firm that sponsors the MAC Mentorship Program – recruited him for a full-time position in its Dallas office. During his on-site interview, Jackson visited with Louviere – a PwC connection from his East Dallas Boys & Girls Club days, and one of the people he credits with encouraging him to pursue a business career.

Finally, everything had fallen into place.

Jackson didn’t just survive life’s ups and downs, challenges and heartaches – he thrived in spite of them and seized every opportunity to position himself for success. Now he wants to inspire others to do the same.

During his final months in the MAC program, Jackson initiated one-on-one meetings with the 2016 MAC Mentorship cohort, sharing his insights and advice over coffee provided courtesy of PwC.

Leaving Chapel Hill is bittersweet. “I will miss how nice the people are here,” says Jackson.

While many of his MAC classmates sit for the CPA over the summer, Jackson won’t be among them. He is completing all four exams within weeks of graduation so he can embark on a different, much-anticipated adventure: backpacking around the globe – an experience he put on hold after his mother passed away.

“I want to see as many places as I can – in Europe, Asia and maybe even Australia – before I start working full-time,” he says.

He’s excited to start the next chapter of his life doing what he loves: accounting and giving back. And he already knows the most important advice he wants to share with his future mentees: do what you love.

After all, that’s what got him to where he is today.

“If you’re passionate about your work, it won’t seem like work,” says Jackson.