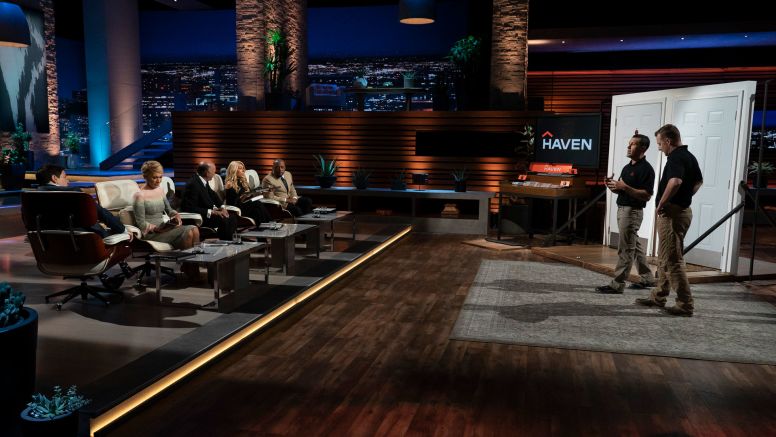 Bertelli is CEO of HavenLock Inc., a manufacturer of security technology products. He was inspired to start the company after his Nashville neighbor’s home was robbed. “We knew there had to be a better way to solve the problem of break-ins,” says Bertelli.

HavenLock Inc. draws upon the knowledge he developed while serving as a member of the U.S. Army’s Special Operations Forces, piloting helicopters in direct action raids in Iraq and Afghanistan. “I landed in the backyards of the bad guys every night, so our special-ops guys could capture them,” he says.

He noticed that insurgents fortified their homes and compounds by welding steel bars at the bottom, middle and top of their doors. That insight inspired HavenLock’s high-tech, floor-based lock system, which is 10 times more effective than a deadbolt, Bertelli says.

His experience in the Army – which developed his ability to set goals, offer guidance to others and then “get out of the way and let them go execute” – is a great foundation for his work as CEO. He built on that in UNC Kenan-Flagler’s MBA@UNC online program, which mastering the business skills and knowledge to begin his entrepreneurial journey.

“I wanted to go to a top-20 MBA program to extend my network and gain more insight into how companies do business,” says Bertelli.

The MBA@UNC program was the perfect fit as he transitioned from the Army to the business world. “Taking two years off from the work world to enroll in a full-time MBA program at that point wouldn’t have been a smart move for me,” he says. “MBA@UNC allowed me to have two amazing experiences – earning my MBA while working for the governor of Tennessee (as the director of business development for the state) – that I would never trade for anything.”

Since he started his business in spring 2014 – soon after starting at UNC Kenan-Flagler – he often aligned his coursework with the development of HavenLock. “Ted Zoller also allowed me to do some independent study focused on the business and see if I could catapult it,” says Bertelli.

“They were both mentors of mine,” says Bertelli. “They helped me think critically about how to get companies like Terminix, which is my biggest customer, to bite off a huge purchase order and do business with a small company like mine. They helped me with the strategy to get my manufacturing partner, Berkshire Hathaway, to give me a large line of credit so I could buy raw materials.”

His MBA studies provided Bertelli with the outlet to speak to thought leaders throughout the university on how to frame his business and determine the go-to-market strategy. “At Kenan-Flagler, I learned how to understand the market; rapidly iterate, prototype and get customer feedback; align strategic partners; and get buy-in from people,” he says.

Another experience Bertelli benefited from was appearing on “Shark Tank,” a reality TV show in which budding entrepreneurs pitch their ideas to five successful entrepreneurs for potential funding. “In May 2018, I drove seven hours to Chicago from Nashville, stood in line with 4,000 people, pitched for three minutes, got in the car and drove back home,” he says. One week later, he learned HavenLock was chosen to appear on the show.

“You miss 100 percent of the shots you don’t take,” he says. HavenLock’s appearance became the most talked about episode of the season. “If there’s one thing you gather from our appearance on the show, it’s that we’re not quitters,” he says. “We’re going to do whatever it takes to make our business successful.”

In the days after the episode’s broadcast, interest in the company was high. “Our website was inundated with 20,000 views a day, we received tons of sales opportunities, and got new distribution leads all over the world.”

While the TV show brought attention to HavenLock, Bertelli and his colleagues quickly returned to nuts and bolts he learned at UNC Kenan-Flagler. “Success takes people, capital, vision and resources from all partners,” he says. “We’re back to the basics of doing our business, which is onboarding new customers and putting product into the homes and classrooms of customers to make them feel safer.”