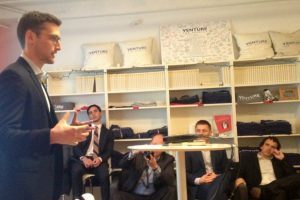 As part of the UNC Adams Apprenticeship program, I had the opportunity to travel to New York with 16 of my fellow apprentices in November 2016. On our trek, we met with several high-growth companies across industries. Each company visit provided valuable takeaways, lessons and insights from real world experience that added to our perspectives of what entrepreneurship really was.

Strategy executives at Spotify and YouTube talked about how to evolve faster than emerging players during a precarious time in media. Howard Morgan, founding partner of First Round Capital and an early investor in Uber, GroupMe, Warby Parker and dozens of other recognizable brands, spoke about the future of automation in America, universal basic income and the changing landscape of venture capital across cities.

We also heard from mid-stage companies Common Bond and Counter Culture Coffee, both of which are disrupting established markets with new processes.

Common Bond is taking on a risky student loan market – where more than 40 percent of borrowers are delinquent – by focusing on low-interest loans for students with high potential earnings. Counter Culture Coffee – founded by Brett Smith (MBA ’04) – breaks every piece of startup folk wisdom by saying no more than yes during the sales process, says Matt Banbury, the company’s regional wholesaler. 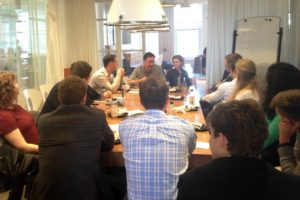 I learned a great deal from each company we visited, but I took the most from Alec Guettel.

Having heard several of Guettel’s talks, I can say that he is a refreshingly humble and candid speaker in a space that is often less so. He’s had a fascinating career as a serial entrepreneur, founding Sungevity, Axiom Law and now, Imprint.

When Guettel speaks, he strays away from highlighting his own accomplishments and instead focuses on sharing actionable advice. In the Axiom law boardroom, he imparted his “10 Rules for Entrepreneurship” on the Adams Apprentices, as paraphrased below.