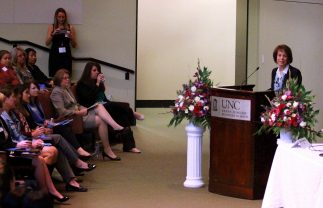 Students and business leaders from across industries came together Nov. 7 for the annual Carolina Women in Business (CWIB) Conference hosted by UNC Kenan-Flagler.

Focused on next-generation business equality, the event celebrated the progress that has been made over time while challenging participants to move beyond the “what is” to the “what could be.”

“The business world has undoubtedly made significant strides towards gender equality,” said Alison Cary-Coleman (MBA/MHA ’15), CWIB vice president of conference planning. “In just the past 10 years we have seen women break down barriers that previously barred us from the executive suite and highest echelons of leadership. We have celebrated the first female speaker of the U. S. House of Representatives, the first female winner of the Academy Award for best director, the first female four-star general in the U.S. Air Force, the first female surgeon general of the United States and here at Carolina, the first female chancellor. But we have not yet reached the point of equality.”

UNC Chancellor Carol Folt echoed this sentiment in her opening remarks. “I was thinking about how things have changed since I started my first job at Dartmouth in 1982,” she said. “I look around this room and realize I would not have been able to see a room like this in 1982 – it has been a wonderful change over time.”

Folt emphasized the importance of men and women working together to ensure such progress continues. “As things change for women, they also change for men,” she said. “It’s in partnership that we often see most of these changes take place.” 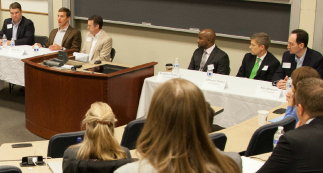 This concept was woven throughout the event, with speakers and panelists challenging both men and women to consider the value of diversity in the workplace – and how they can make an impact.

During a session on welcoming women in the workplace, an all-male panel – the first in CWIB Conference history – spoke to the importance of companies encouraging, supporting and investing in the professional development of the women that work for them.

“You grow the most when you’re in a role that’s outside your comfort zone,” Buck told attendees. “The opportunity to be successful is the decision to make an impact.”

“Drive toward a career that is most satisfying for you,” Leonardi said. “Don’t be afraid to be a pioneer.”