Skip to content Skip to Programs Navigation
Ace on the hill: Benton Moss

Ace on the hill: Benton Moss 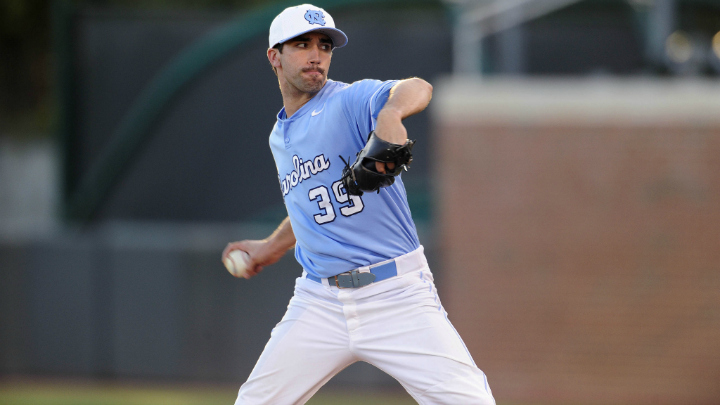 Before each college semester or important event in the life of Benton Moss (BSBA ’15), his father, Tom, types up a letter that the duo refer to as “nuggets.”

“I called them nuggets,” Tom says, “because it sounded cooler than ‘advice.'”

1. Don’t stretch yourself too thin between academics, baseball and extracurricular activities.

This one shows up on multiple nugget lists. That’s because Benton Moss has multiple interests, and every time he tries a new one, he seems to find out that he’s good at it. He took piano lessons for 12 years which, as he puts it, “easily translated” to the pipe organ. Then, a few years ago, his aunt taught him how to tune a guitar.

Sounds like a potential nugget to be handed down to a future member of the Moss family. The self-taught Moss became so proficient at the acoustic that he was one of the featured performers at the 2013 Rammys, the end-of-year Tar Heel athletic department awards event, as he joined Marisa Dobbins of the track and field team for a five-minute acoustic mashup of four popular songs. The performance was one of the highlights of the evening.

And yet, his musical talents are little more than a fun hobby. Moss is a Morehead-Cain Scholar, the highest academic award at Carolina, and was a member of the 2013 CoSIDA Academic All-District team. He makes a B about as often as Carolina misses a trip to Omaha. He’s a committed member of the campus chapter of Athletes in Action. He’d love to earn a spot in student government or in a leadership role on campus, but “I just can’t do it,” he says. “That would be doing a disservice to my academics in the classroom and to my teammates.”

Oh, right, he also plays baseball. He’s been a member of the weekend rotation almost since setting foot on campus, and he had a 3.77 ERA as a sophomore while throwing 88.1 innings. His big curveball is a major weapon and helped him strike out 92 batters last season against just 34 walks.

In his last two outings this season, he threw the first complete game of his Tar Heel career in beating North Florida, then notched a career-high 12 strikeouts in beating Pittsburgh.

“My main focus after the fall was gaining weight,” he says. “For me, that’s always been an uphill battle. It’s no secret that mass helps translate to velocity at some point. I have a good frame, so I just wanted to put something on that frame.”

You heard him correctly. In the world of Benton Moss, one of the primary problems is being too skinny. And the fact that he did some of his post-fall workout routine while in Nicaragua on a December mission trip sums him up perfectly.

“He’s a relentless worker,” says Carolina head coach Mike Fox. “He’s an unbelievable competitor, which some people might not expect. He’s going to get better because of that work ethic, and he’s put on some weight that I think will help him.”

2. Get your sleep, because sleep keeps you healthy, alert and focused at all times.

This one might sound simple. His head coach doesn’t think it’s quite that easy.

“I’m a little bit in awe of the young man,” Fox says. “I can’t even fathom being his age and doing the things he does with his accomplishments. From community service to Athletes in Action to his grades to his personal life to music, you wonder if he sleeps at all.”

He does sleep. It’s part of the nuggets.

But here are Moss’s courses this spring. Keep in mind that these are his in-season courses, when some athletes traditionally go lighter than out-of-season to leave time for practices and games. The Rocky Mount native is taking the following:

More impressive than his course schedule is the fact that he actually enjoys those classes. He’s the kind of person who says the following: “I took Econ 485 last semester, and that class was fantastic. The professor was Rita Balaban, and it was really math-heavy, but it was all about league sports, how they’re organized and the implications of different league structures.”

Somehow, your ability to schedule your senior year such that you had no Monday or Friday classes and no 8 a.m.’s doesn’t seem quite as impressive anymore. Moss recently signed off Facebook and deleted his Twitter account, two staples of the normal college existence. He did it not because they were taking too much of his time, but because they had the potential to take too much of his time.

“Benton is organized, engaged, prepared, articulate, perceptive and intellectually curious,” says Chip Snively, a UNC Kenan-Flagler Business School professor who taught Moss last year in a Business 408 finance course. “As a professor for 12 years, I find if students have those characteristics then they prove to be outstanding students; not just good students, but outstanding ones. They put more into the class and get a multiplier benefit out of it. Benton was one of those.”

Moss describes himself as “one of the most curious kids you’ll ever meet,” so it seems natural to ask him what he’s reading for fun right now. Not textbooks, not assigned reading, but only the books he picks up in that free time that appears to be somewhat non-existent.

“It’s kind of nerdy,” he says sheepishly. “I’m getting into some of the tech startup stuff. I’m reading introductions to a lot of database systems. Startups are a really fun atmosphere, and I’ve been around a couple that wowed me. The team aspect is appealing, with everyone doing multiple different roles and each link being an integral part of getting the company off the ground. It’s a fantastic atmosphere to be around. I’m having a mid-major crisis right now where I wish I could’ve picked up a minor in computer science or something. But I thought about it too late.”

Instead, he’ll have to get by with his major in economics and business administration.

3. You are beyond blessed with options in the classroom as well as on the field. Don’t get too high or too low on failures and successes.

This might be the easiest one to remember, because it’s not just Tom Moss who reminds Benton of it. It’s also virtually every professional baseball organization in America.

Junior year is usually draft year for the college game’s top prospects. Players are eligible when their high school graduating class is three years out of high school–that’s this summer for Moss. When a player is picked after his junior year, he has maximum leverage; if the drafting team doesn’t meet his financial requirements, he can always threaten to go back to college. That leverage vanishes if he indeed goes back to school for his senior year, because a drafted senior doesn’t have the option of returning to school.

Moss will be one of the most intriguing prospects on every 2014 draft board. As a three-year starter at a national power who has pitched at the highest levels, he’s essentially a surefire draftee. But he does have some red flags. It’s just that his red flags are different than most.

As part of the pre-draft process, professional teams hold on-campus meetings with prospective draftees. For Moss, those sessions have included a common theme.

“The first thing everyone asks when they walk into a scouting meeting is, ‘Are you really going to commit to this if we call you up and sign you?'” Moss says. “Some of them are very direct. Some will beat around the bush and then ease into it, but invariably it’s the first question any of them ask. They’ll say, ‘We know you are a smart kid. Do you want to play professional baseball and will you be committed to it while you’re doing it?'”

“Normally, my reply is that it’s true that I do have a lot of things in my life,” Moss says. “But if you take a hard look at the things I have going on, I’m doing them because I am committed to them. If I end up playing professional baseball, it’s going to be because I want to commit myself to it for that period of time until I can’t play anymore. I’m not out here to con anyone. If it’s a route I want to take, I’m going to do it. If I don’t think I can commit to it, that’s another thing, and we’ll go down that road if it comes up.”

There is the essence of Benton Moss. He plays a sport where reaching the professional level is the ultimate dream of millions of his peers. But he has such a long view of his life that even the dream of playing pro baseball is only a dream for him “for that period of time until I can’t play anymore.” Once it’s over, he’ll do something else. Most likely, he’ll do it very well.

Since his own coach, Mike Fox, professes to be a little bit in awe of him, it seems natural to ask Moss who impresses him. Who awes him?

“The people who amaze me,” he says, “are people like a Roy Halladay or a John Mayer, who have honed in and focused on their passion. I respect anyone who really hones in on what they love.”

This is a little unexpected. The kid with so many options that professional baseball teams aren’t certain they are appealing enough for him is enamored by people with the single-minded focus of Halladay, a major league pitcher who retired after last season, or Mayer, a seven-time Grammy-award winning singer-songwriter.

Those are people who have committed their lives to the skill that they have perfected.

Moss sees the irony. Of course he does.

“The beauty of it is that those guys are full-grown men, and I’m still a kid,” he says. “I’ll have to begin to make some choices pretty soon. But I’m not there yet.”

This article was written by Adam Lucas, editor of CAROLINA, and republished with permission from GoHeels.com when Moss was a student at UNC Kenan-Flagler. After he graduated he was drafted by the Tampa Bay Rays.