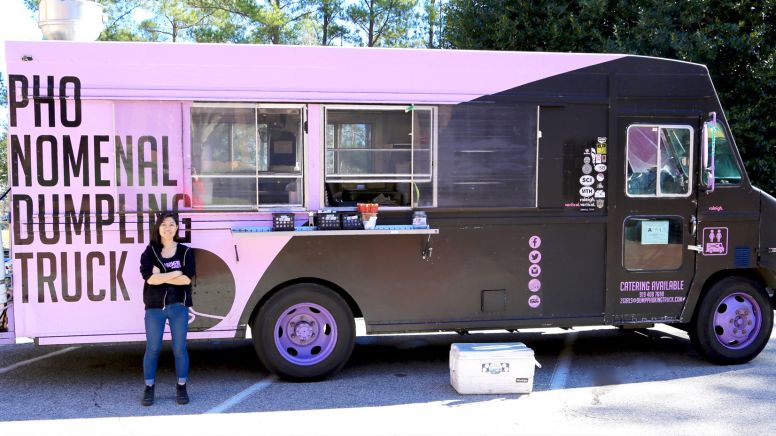 It’s become a phenomenon in the Triangle. It also became a national television phenomena, winning first place and a $50,000 grand prize on the sixth season of the Food Network’s “Great Food Truck Race.”

From finances to taxes to the cooking itself, Woo’s accounting business expertise has been a critical part of Pho Nomenal’s winning recipe.

After earning her MAC degree, Woo went to work in auditing at Big Four accounting firm PwC. Her education and experience prepared her to be a food truck entrepreneur.

“You’re there at the client site doing an audit,” she says. “They’re not happy you’re there, but they’re paying you. Being able to balance all those relationships and keep people happy was one of the biggest things I was able to learn.”

It’s not that different from keeping customers happy, hob-knobbing with food truck rodeo promoters and networking with other truck operators.

“My time at UNC and my time at PwC were both vital,” she says. “I might not understand a legal document, but I can sit down and work my way through it. That’s from my training from UNC Kenan-Flagler.”

“Making dumplings, it’s a high-touch process,” she says. “That’s something that we’ve constantly made better and better and better. My tweaking of the process – that has come a little bit from the business world.”

Woo’s move from public accountant to entrepreneur took a couple of years. She liked PwC and her job, but on nights and weekends another passion was simmering.

At the time, she was lived with two Asian-American roommates, and the three of them often prepared food from family recipes. “Every day I would come home and they would teach me a new thing that their parents had taught them,” she says. Dumplings and pho were staples and have become mainstays of the truck’s menu.

“PwC was a fantastic firm — the best firm I could have been in,” she says. But her love of cooking was calling to her. With the food truck trend heating up, she and Lin decided to find out if they could turn their passion into profits.

With $17,000 from a Kickstarter campaign and some savings they pooled, the pair bought a $7,000 truck off Craigslist, outfitted it and hit the streets.

In 2015 they got a big break: a chance to compete on the Food Network’s sixth season of the “Great Food Truck Race.” The show pits seven food trucks against each other as they travel from Los Angeles to Chicago, completing various challenges along the way.

The Pho Nomenal truck broke down the first week of the competition and had to be towed. Throughout the race, Woo negotiated with hotels to park the truck overnight in their parking lots. “It was little deals like that, all over the place, that kept us in the competition,” she says. “We never expected to win.”

In the season finale, Woo and Lin faced off with  another finalist – a team with five food trucks and two restaurants back home, plus a large social media following – including 40,000 followers on Instagram versus Pho Nomenal’s 800. But they didn’t have a UNC MAC graduate.

“The show was a huge eye opener and sort of re-inspired Sunny and I, because we saw all the things we could be doing,” Woo says.

The two are planning to open a brick-and-mortar restaurant – and Woo knows that restaurant entrepreneurship is especially tough. Seventy percent of all non-franchise restaurants fail in the first three years, she notes. It seems unlikely that Pho Nomenal will fall victim to that statistic – but if it does, Woo knows she’ll have options to fall back on. “I keep up with my CPA,” she says. “I keep up with my continuing education.”

Considering accounting as a career?

• Get more information
• Join/watch an admissions webinar
• Get application details (and apply!)