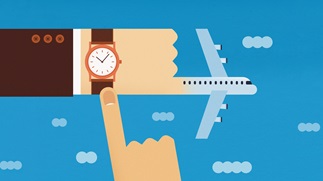 Some of the worst causes of air-travel delays in the U.S. could be pinpointed using research by UNC Kenan-Flagler operations professor Vinayak Deshpande and his colleagues.

To more accurately model airline delays, Deshpande – along with Mazhar Arikan of the University of Kansas and Milind Sohoni of the Indian School of Business – developed a new statistical model of U.S. domestic airline travel.

Their work shows that the traditional model of airline travel overestimates both the number and frequency of delays. They published their findings in “Building Reliable Air-Travel Infrastructure Using Empirical Data and Stochastic Model of Airline Networks” in Operations Research.

The new model developed by Deshpande and his team is more accurate. It also can pinpoint which flights and airports are disproportionate sources of delays, which has practical applications for the industry and for passengers, including:

Flight delays aren’t just a matter of convenience for travelers – they also impose a significant cost on the U.S. economy. One congressional committee estimated the economic impact of delays at $41 billion in 2007.

So what’s the difference between the model that Deshpande and his co-authors developed and the existing method? In simple terms, the traditional model views flight delays as one-time events. It actually overestimates the effects of delays, which leads to scheduling inefficiencies.

Deshpande’s model, however, follows the impact of a flight delay as it ripples through the air travel system.

Let’s say a particular plane is scheduled to fly from Atlanta to Charlotte, then from Charlotte to Philadelphia, then from Philadelphia to Washington, and then back to Atlanta over the course of a day. If the initial flight out of Atlanta is 20 minutes late, traditional methods assume that the subsequent flights still take the full duration of travel time scheduled.

Now assume that after take off, the pilot announces that although the flight left a bit late, the tailwinds will allow her to make up some time. Traditional airline scheduling models have no way of taking that into account — but Deshpande’s model does.

The model developed by Deshpande and his co-authors adds up the actual delays on each leg to calculate the true total delay propagated throughout the system. If the second flight (from Charlotte to Philadelphia) ends up being 10 minutes ahead of schedule, the model takes that into account and doesn’t automatically apply the 20-minute delay that originated in Atlanta to subsequent flights.

The researchers analyzed federal government data on actual airline departures – 21 million arrivals and departures at U.S. airports from 2005-07. They compared the actual flight time – the time between leaving the gate of one airport and arriving at the gate of the destination airport – to the scheduled flight time. From this, they calculated flight delays and determined that their new model better captures the impact of take-off delays and other schedule variations as they propagate through the air travel system.

And there’s good news for travelers: one major U.S. airline is already using the new method for its flight scheduling, Deshpande says. 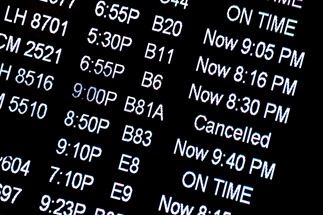 Does it seem like you always get stuck when flying out of from New York’s LaGuardia Airport? Do you dread having to change planes in Atlanta or Chicago? There might be a legitimate reason underlying your airport sentiments.

Data analysis shows that some of the largest U.S. airports are also the biggest source of flight delays throughout the country, including:

Because so many flights leave these airports, they have a disproportionate impact on flight delays nationwide. Deshpande and his colleagues found that a 15 percent increase in capacity at these five airports would decrease nationwide flight delays by an average of 10 percent.

Although you might still dread passing through those airports, there is hope. If more government and airline industry decision makers adopt the new, more accurate model developed by Deshpande and his co-authors, we might all be getting to our destinations a bit sooner.

Read more: More luggage, more problems? Not when it comes to flight delays.