A stronger economy – for all 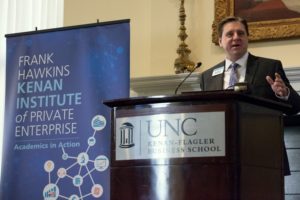 With each closing chapter in our nation’s history, present-day economic challenges shape conversations about our future. As with any U.S. presidential election year, 2016 forced us to critically examine these issues as we turn the page and work toward a better tomorrow.

At the “What’s Next, America?” conference hosted by the Frank Hawkins Kenan Institute of Private Enterprise, business leaders, researchers and policy makers gathered to share actionable insights and provide concrete solutions to the economic challenges facing the next U.S. administration.

Greg Brown, Kenan Institute director and finance professor, provided an overview of the current economic climate. This glimpse into key economic indicators revealed many of the reasons behind the disenchantment haunting both sides of the electorate during the 2016 race.

The U.S. economy is growing – but the typical American isn’t actually experiencing it.
America’s real GDP is well above pre-crisis levels – and as it continues to grow, we’re also seeing that income is on the rise. So what’s the problem?

Americans are experiencing a changing labor force.
The internet and information technology have both rapidly and radically impacted the way the private sector operates. Consider the fewer interactions you now have with service employees due to online banking, automation and online shopping.

The economy has always evolved and needed different types of skilled workers, but the pace over the last 15 years has been more rapid than ever, and the need for human labor in moderate-wage industries is declining.

We’re now in the midst of one of the most rapid economic shifts in the history of mankind, Brown says. The fundamental structural changes to the global economy are coming so fast that the broader labor force cannot keep up. Unemployment is nearing record lows, but the labor force participation rate is also on the decline – meaning more Americans have given up on even looking for work. If these individuals can get back to work in a new and productive capacity, both household income rates and true GDP would benefit.

So what is next, America?
U.S. leaders need to think about which policies are going to position the economy – and workers, in particular – to better adjust to these rapid economic changes. The challenge for America’s leaders revolves around devising policy that achieves objectives by aligning private sector incentives to work for the greater good of the public.

At the end of the day, we want America’s leaders to strive for an improvement in our standard of living at the individual level, says Brown. That means not just improving the overall economy, but making sure those gains are shared broadly so that all Americans are able to participate in the nation’s prosperity – not just a small fraction.